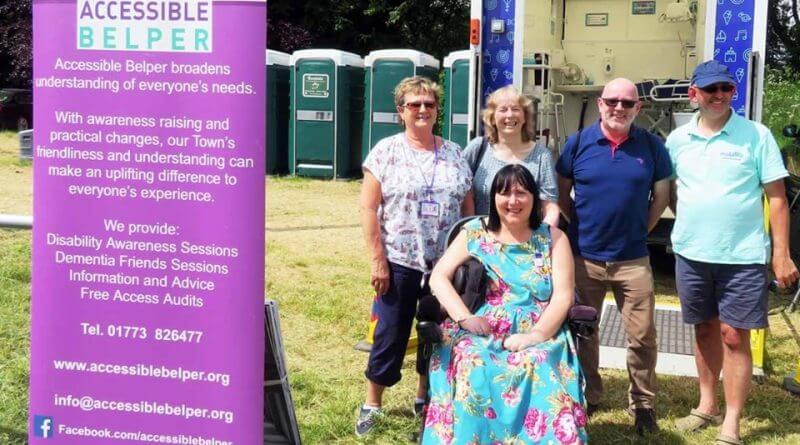 On Sunday 8th June 2019, the Queen’s Birthday Honours list was released.  Amongst the winners were 2 local women, Siobhan Fennell, from Belper, who was awarded a British Empire Medal, and Jacqueline Woodcock, from Milford, who got an MBE.

Jacqueline Woodcock is the founder and chair of Dying to Work, an organisation dedicated to fighting the injustices suffered by working people who have a terminal diagnosis.  Jacqueline had not responded to enquiries at the time of publication.

Siobhan Fennell is the founder and chair of Accessible Belper, which has done great work in educating local people to consider a broad spectrum of disabilities, as well as advocating and campaigning for accessibility to the wonderful events, shops and facilities which Belper has to offer.  Siobhan spoke with us on Monday morning.

The first thing Siobhan told us was that she nearly missed getting it.  She was away when the letter arrived and came home on the day which the government had set as a deadline to reply.  Thankfully, circumstances were considered.

Siobhan has no idea who nominated her. Three people are required for a nomination, 1 nominator and 2 supporters.

When asked how she felt about it, Siobhan graciously transferred the attention to Accessible Belper after saying that it was “a real shock”,

Kudos and recognition for Accessible Belper is just fantastic!

There are over 1000 awards in the Queen’s Birthday Honours list, so the standard is for the medals to be awarded regionally, and then all winners are invited to a royal garden party, where they will meet the Queen.  No dates have yet been set for either event.

It’s a real privilege. The important thing is, a big thank you to those people, because it means the message will spread.  But I do think, ‘why me?’  There are so many people out there doing incredible work.  It’s fantastic to get the message out; other people will look at what we’ve done and think they can do it for their town.

What’s next for Accessible Belper?  For the message and actions to spread, with all of us learning and evolving.

I’m not (all of) Accessible Belper.  Hopefully people who come on our disability awareness (training) will carry it on.  There has been such great movement across the town.  I knew Belper people would be able to run with it.

Siobhan has written a 10 point model for people wanting to start their own Accessible group.  She also noted the importance of partnerships, such as with Dementia Friends, in awareness raising, this educational and perception -shifting focus being the major purpose of Accessible Belper.

This is not the first award Siobhan has won for her successful efforts to change the way people think about disability.  In 2016 we reported on her being the first recipient of the Most Accessible Town Award for her work in Belper, by Accessible Derbyshire (which Siobhan has also been part of) and last year, she was one of 25 women chosen to become statues in Put Her Forward’s art project to “to double the statues of non-mythical, non-royal women in England.”

In fact, having recieved previous awards is part of the criteria for being awarded an Honour by the Queen.  So if you want even more of the many fabulous volunteers in Belper to be similarly awarded for the local institutions they have founded, to join Siobhan, and Jacci, and Adrian Farmer, you’d better start nominating them for other awards first (and check their opinion on the monarchy).  Nominations for the New Year’s Honours list can be made using the Honours-Nomination-Form (download).