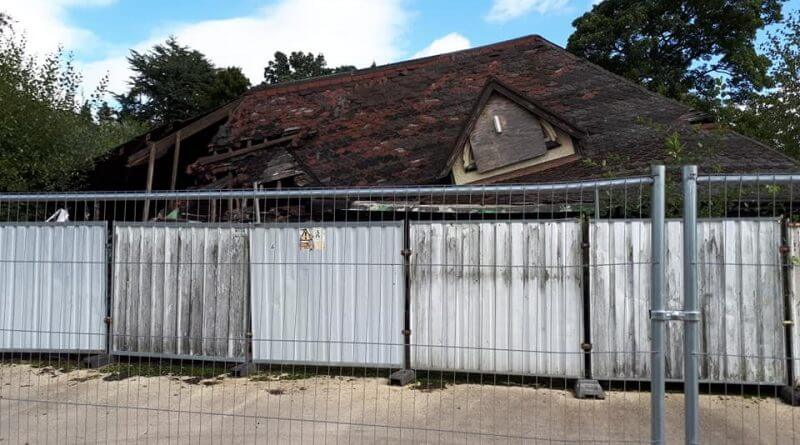 After 38 years, Amber Valley Borough Council is on the verge of approving its plans to demolish the Swiss Tea Rooms and replacing them with a new building capable of seating 44 customers inside and another 40 on an outdoor veranda.

A meeting of the authority’s planning committee will make a decision on Monday, June 17, with council officers recommending that the scheme is approved.

The town’s Swiss tea rooms, in the River Gardens, were built in 1906 after being commissioned by George Herbert Strutt, the only son of esteemed cotton manufacturing magnate George Henry Strutt.

However, the tea rooms shut up shop in 1981, partly due to vandalism.

Since then, it has sat vacant, fenced-off, and has become increasingly more and more dilapidated. The roof has fallen in on itself.

Historic England had said that while the building is not listed itself, it represents a key building in the Grade II* park and gardens.

It had initially objected to the plans, saying: “The loss of the tea rooms would harm the significance of the registered park and garden.
“However, it is accepted and that the creation of a replacement tea room is highly desirable.
“A new tea room will provide a valuable public facility within the gardens and will also fill the ‘hole’ left in the original historic design which would be caused by the loss of the original structure.
“It is essential that any replacement structure responds not only to the architectural spirit of the original, but also to its context.”

Modern new designs for the tea rooms were revealed in January, with the planning application being filed in March.

However, the design of the roof has now been altered to gain the approval of Historic England, a government department, which has now withdrawn its objection to the plans.

The new look has been referred to as a simpler “hipped” roof instead of a Dutch gable design.

In essence, the two ends of the building had small windows at the tips of the eaves, these have now been removed.
The new roof design now slopes directly from the crest to the lip, with columns around the side to mark the veranda area.

Meanwhile, the Environment Agency has said that the new building would be more flood resilient due to its smaller footprint. It encourages more design improvements to boost its chances of standing up to extreme flooding.

The Friends of Belper River Gardens group said: “This application will go a long way towards meeting the expressed needs of Belper residents and businesses to have a high-quality and appropriate replacement Swiss tea rooms.”

The Gardens Trust, a UK charity which oversees the conservation of landscape heritage, said: “The current Swiss tea rooms have been shut since 1981 and their current state of dereliction detracts considerably from the Grade II registered park and garden.
“It is noted that local people, including the Friends of Belper River Gardens, have been consulted and welcome this proposal.
“The new design respects the character of the old tea room and sits on the footprint of the original building.
“The proposal recognises and responds to the need for improvement in the visitor experience and restores the tradition of having a tea room overlooking the river at this location, provided ever since the gardens opened in 1906.”
Council planning officers, recommending approval, wrote: “The proposal will result in an appropriate form of development beneficial to the wider community which will enhance the Registered Park and Garden, the World Heritage Site and the Conservation Area.”

“As feared when the last administration refused to engage at an early stage with Heritage partners, the scheme was nearly scuppered when Historic England raised concerns in April about the proposed design on Heritage Grounds.

It has taken a lot of work to get the design changed to one deemed acceptable to Heritage Consultants, Historic England and the Derwent Valley Mills World Heritage Partnership.

However, I’m delighted to say that we are now in a position where there are no objections to the amended design.

The Budget is in place and fully ringfenced for the project and assuming planning permission is granted, construction should begin this summer and this time next year should be open.

As anyone who knows me will understand – I see the Tearooms as vital to begin the regeneration of our Heritage tourism that will become increasingly important to our local economy. If a council can’t build a tea rooms, we may as well all give up and go home!

Id like to place on record my admiration for the wonderful people of Belper Community Enterprise who kept the pressure on and kept the project alive over the last few years, when scheme after scheme failed. People like you make Belper the wonderful place it is.”