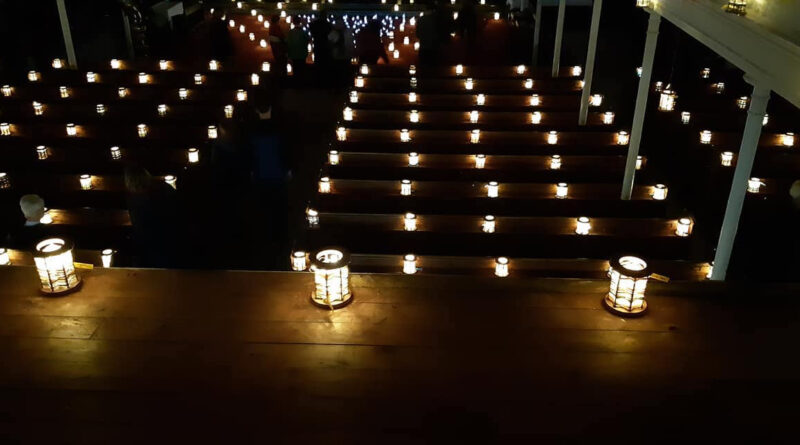 This event is being organised by Japanese artist Seiko Kinoshita who in 2019 was commissioned to work in the Derwent Valley Mills World Heritage site. She will show two short films followed by refreshments and a chance to chat.

During her time in the town Seiko led many workshops in the Belper community including three at St Peter’s Church. People decorated a lantern that Seiko had designed and made in the shape of a mill bobbin. These lanterns were then part of a community event in October 2019 called ‘Threading Through Communities’. It had been hoped that the community could walk in Belper with their lanterns but due to wet weather most of the lanterns were exhibited in a stunning display in St Peter’s Church.

“I feel there is nothing equal to its magnificent power and pure beauty. The challenge to design alongside the power of nature will continue. I intend to create my works to present a moment of peace to a viewer who lives in our hectic world and to push the boundaries of textiles being perceived as craft.”

Previously Seiko also created her own large art installation in the basement of Belper North Mill called Threading Through Time.

During this exhibition the country experienced very heavy rainfall, Belper and the North Mill were flooded. Her piece of work was under three feet of flood water, however she was fascinated by the chaotic result of nature’s intervention and continued to exhibit the altered installation until the end of the exhibition period.

Daniella Sasaki made a short film about Seiko’s work called ‘Threading Through Communities’ 2019 and Seiko plans to come back to Belper to show this film plus a new film made by herself.