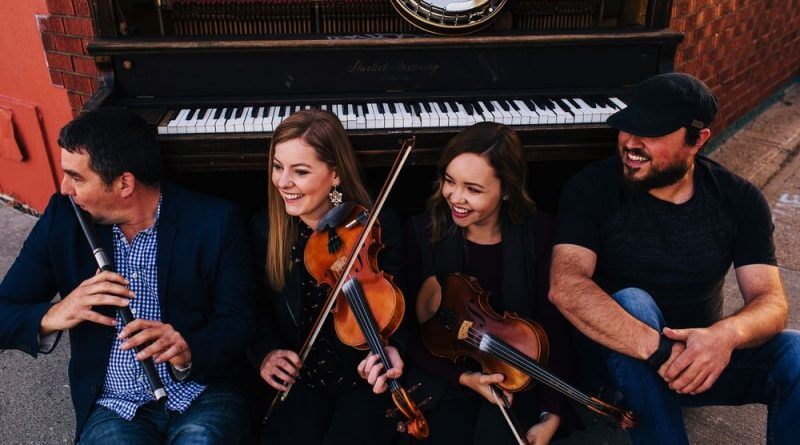 Tickets: £15 and are available at the Old King’s Head or online at:

Còig is one of Atlantic Canada’s most exciting and invigorating Celtic supergroups made up of four accomplished multi-instrumentalists, Chrissy Crowley, Rachel Davis, Darren McMullen and Jason Roach. After the success of their debut UK tour in spring 2019, which was extended due to demand, they are back for more. With the fiery Celtic high-energy style at its musical core, Còig easily shifts between century old tunes of past generations to original and upbeat compositions featuring the band’s range of over a dozen instruments (vocals, fiddles, guitars, banjo, mandolin, viola, bouzouki, whistles, step dancing and more). With driving tunes, haunting songs and infectious energy, Còig is an unparalleled music force.

Their fourth and latest album, “Ashlar” (released in March 2019) is full of surprises and flows from lively instrumental sets to tender traditional ballads to fabulous covers, everything Còig is known for and then some. Còig’s music is a unique combination of influences that could only come from these four seasoned players. The Cape Breton quartet have assembled an impressive list of credits for their award-winning recordings, ”Rove” (2017), “Carols” (2016) and “Five” (2014) including a Canadian Folk Music Award, a JUNO nomination and multiple East Coast Music Awards and Music Nova Scotia Awards.

The best in trad music, in a non-traditional way. That’s Còig.

“Dynamic Folk from Cape Breton. A self-professed Celtic supergroup with a new album, Ashlar, hot off the press, Còig are a folky force to be reckoned with. Ashlar means ‘a perfect fit’ and it’s clear these musicians have found a perfect fit in Còig.” – Songlines

“Ashlar is an exceedingly sparkling affair packed with contrast and versatility, every item a different kind of musical experience. And yet the whole ten-track collection possesses a healthy unity of execution and a delightfully purposeful energy. Ashlar is a solid and satisfying listen and a very good example of quality Cape Breton Celtic that you’ll want to revisit.” – folkradio.co.uk