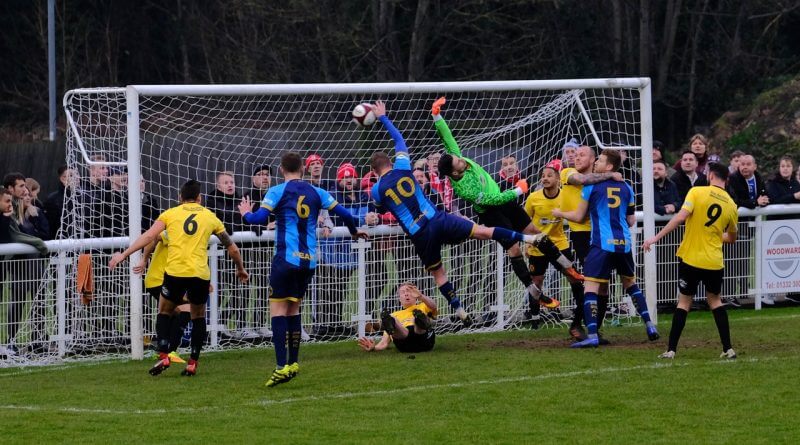 Belper Town put on a battling display in front of a bumper New Year’s Day crowd but had to share the points after neither team could muster a winner.

It was a thoroughly enjoyable afternoon of cut and thrust football with both teams contributing to a feisty local derby fixture. Belper manager Grant Black brought back Craig Nelthorpe in place of Cameron Clark who dropped to the bench while the Robins included former Nailers Kieran Wells, Jermaine Hollis and Dean Freeman in their starting line up.

Danny South headed a 4th minute corner just over to set things rolling for the Nailers who created more than their fair share of chances during the game. Kieran Wells reciprocated with an 8th minute header easily saved by Ryan Musselwhite and Nathan Curtis nearly produced one of his trademark goals by cutting inside and whipping a shot

Alex Marshall had the ball in the Belper net only to be ruled offside, and the game continued to be fast and furious with the visitors just about holding the upper hand in terms of possession. Riece Bertram’s overhead kick from Craig Nelthorpe’s 35th minute corner just cleared the cross bar, then moments later; Evan Garnett had a shot blocked before Derry Robson’s follow up effort was deflected for a corner kick.

The Nailers were showing up much better as the half drew to its close and a good opportunity went begging just before the whistle when Garnett’s lay off was put wide by Alex Peterson. Kyle Bryant’s long range effort on 49 minutes sparked off a frenetic second half and Ilkeston’s Richard Wyman was even closer with an effort that fizzed past the Belper upright.

The Nailers took the lead with a fine goal on 54 minutes when Alex Peterson got to Craig Nelthorpe’s corner kick ahead of everyone else and powered a header in at the near post with Ross Durrant unable to react. Belper were a whisker away from a second goal 2 minutes later when Danny South’s header was flicked on by Peterson and would have crossed the line had a Robins’ defender not been alert enough to clear the ball away.

In a packed few minutes of action Ilkeston responded with an equaliser just two minutes later when Fabian Smith scored directly from a free kick that caught Ryan Musselwhite completely off guard.  Evan Garnett wasn’t too far away with a 59th minute flick after a good passing move from the Nailers, and Danny Gordon’s free kick on 74 minutes flew just the wrong side of the upright

Substitute George Milner produced a great solo run and pass into the feet of Alex Peterson on 77 minutes, but the Belper striker couldn’t add to his impressive season’s goals total as he lifted the ball high over the bar. Sam Wright was also close to finding a winner for the Nailers in the 86th minute but his shot took a slight deflection which was enough to send the ball wide of the target.

Despite Belper producing their best performance for some weeks, especially in the second half, it wasn’t quite enough to earn maximum points and they had to settle for their second successive draw.