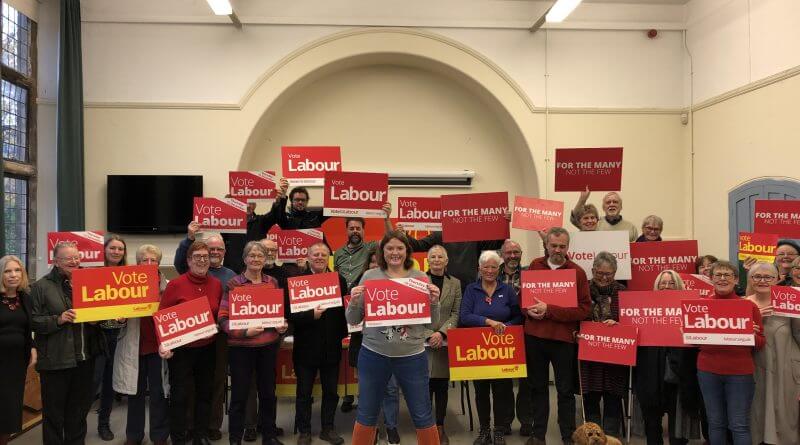 AN HEROIC BELPER woman, who received a top bravery award for averting the deaths of hundreds of aircraft passengers, has been picked as the Labour Party’s candidate in the race to be the next Member of Parliament for the constituency of Mid-Derbyshire.

Emma Monkman, 45, whose life-saving actions won national praise when she tackled a violent male passenger on a holiday flight, has topped a Labour Party parliamentary selection process for next month’s general election – and she is promising to fight for every person’s vote to bring real, positive change and hope to the constituency, which she claims has been neglected by ten years of austerity and missed investment opportunities.

“To have the opportunity to stand for election in the constituency where I live and work is a wonderful honour,” Emma says. “I, along with so many others, am fed-up at watching a succession of arrogant Conservative MPs taking ordinary people’s votes for granted in Derbyshire – and I promise to reverse this neglect by bringing real change to our area.”

Emma is no stranger to bringing change to people’s lives. Just over seventeen years ago, whilst she was employed as an aircraft safety attendant, she was thrust on to the national media stage following an act of remarkable, selfless bravery. On a flight from Manchester Airport to Malta, she wrestled an aggressive passenger to the ground after he attempted to open an exit door of a Boeing 757 aeroplane, as it hurtled down the runway to land at the popular tourist holiday destination.

“The burly man lunged for an emergency exit lever and I knew if he managed to open the door, even by a tiny amount, he would have endangered the safety of everyone on the flight,” she explains. “He’d been drinking alcohol, and when I saw him heading for the door I chased him down the aisle and pulled him to the ground. I just wanted to do the right thing and I was determined to protect and safeguard everyone on board.”

Had the drunken holiday-maker succeeded in opening the door, Emma would have probably been sucked into the aircraft’s engine and killed. The offender was prosecuted at court and subsequently jailed for drunken behaviour and endangering the safety of an aircraft.

Emma’s quick-thinking courageous accomplishment drew national media attention as well as praise from local law-enforcement agencies. She was presented with a special commendation from Greater Manchester Police – along with a national bravery award from the Royal Humane Society.

The Society, which was formed in 1774, described Emma’s actions as uniquely outstanding. Speaking at a special presentation event, Major General Christopher Tyler said: “We become used to hearing of amazing acts but, really, this one is truly in a league of its own. We have never had anything like it in the long history of the Society. If ever one of our awards was richly deserved, it is this one.”

Following the mid-air-rage incident, Emma was inspired to qualify as a private pilot. “I was really proud to do this,” she says. “And since then I’ve gone on to other transportation adventures – including setting up my very own motorbike instruction and training company.”

She’s also maintained a long-standing interest in politics and the environment. In addition to holding a degree in International Relations and a Master’s in Environmental Politics and Climate Change, Emma has volunteered for the British Red Cross, as well as serving on the board of directors for the Lyme Green Settlement and Rural Action Derbyshire charities.

And in May 2019, Emma’s interest in politics led to her applying to be a candidate in the local government elections. “I think if you wish to stand you should always try to do so in the area close to where you live or work – so I decided to put my name forward to be a councillor in my hometown of Belper,” Emma explains.

But the challenge to getting elected in the market town of Belper was daunting – as it had been dominated by the Conservative Party for many generations. “I must admit I do like a challenge and thought I could make a difference,” she says. “And with that I got out and about and spoke to so many wonderful, local people about issues that matter to their lives.”

Working with a team of Labour Party activists Emma developed a positive message and went about sharing her vision to local people. “I wanted to build a new, kinder form of politics. A place where younger and female candidates felt able and confident to contribute,” she says. Her hard work and passion paid off, resulting in her electoral victory as the ward councillor for Belper North on Amber Valley Borough Council – followed by another remarkable local polling success with a seat on Belper Town Council. “It was amazing to see the Labour Party sweep away years of Conservative neglect and entitlement – and five months on, we’re already seeing new, great things happening locally.”

Emma’s local community engagement activities began to attract praise from her colleagues on Amber Valley Borough Council and when a general election was called for 12 December, they encouraged her to stand for national political office. “There are so many issues facing the people of Mid-Derbyshire, such as affordable housing pressures, rising crime levels and a heightened frequency of flooding caused by climate change – and I want to do something about these challenges by making sure our area gets better national representation,” she says. “So I decided to put my name forward and I am delighted to be selected as the Labour Party’s candidate.”

Addressing a crowd of supporters in the town of Belper on Saturday 9 November, Emma announced that she is determined to transform Mid-Derbyshire economic and social fortunes by attracting enhanced financial investment to the area. “I want to create new, well-paid jobs for local people. I will strive to reduce crime by putting more police officers on our streets too,” she explains. “Additionally, I hope to strengthen environmental protection to ensure our communities are properly safeguarded against the growing threat of flooding and climate change.”

The constituency of Mid-Derbyshire – which is made up of Allestree, Borrowash, Belper, Little Eaton, Breadsall, Ockbrook, West Hallam, Stanley, Duffield, Spondon and Oakwood – has over 70,000 electors and Emma is determined to engage with as many people as possible during the four weeks of the election campaign. “I will make sure I get out and about and visit every corner of our wonderful constituency. Now is the time to reverse years of political decline and neglect – this truly is a unique opportunity to vote for real change and hope,” she says.

Emma acknowledges that adjusting to life as a Member of Parliament will not be straight-forward – but she thinks the people of Mid-Derbyshire are ready for change. “I am a resilient and active person – and I think our constituency needs someone who can work hard and be more visible in the local communities I hope to represent. I hope that by running a positive, fresh and vibrant campaign I can raise aspirations of what our future can look like – rather than everyone settling for another five years of more of the same invisible and tired set-up,” she explains.

Emma concludes: “The people of Mid-Derbyshire deserve to be represented by someone who cares passionately about our every part of our wonderful communities – rather than the chosen few. And I promise to do my very best for everyone with a message of hope and positive change.”