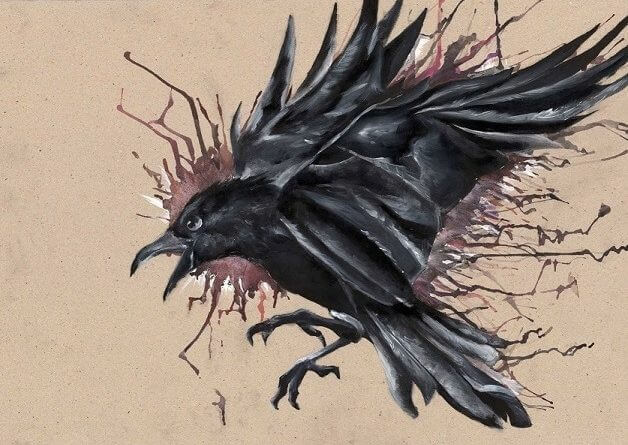 I’ve been spoilt by the recent shows of the Belper Players.  Ross isn’t as good as one might expect after seeing Road, or Billy Liar. That doesn’t mean it’s bad.

Under papier mache battlements, on a sparse modern set of chessboard and modelling cubes, writer-director Jeff Moule showed us what happened between Shakespeare’s scenes in Macbeth.

The story focused on the Thane of Ross, who carries messages in the original play.

This is Jeff Moule’s fifth play with the Belper Players, and they work well together.  I felt that this time the writing was better, and possibly funnier, than some parts were conveyed in acting.

The second scene of the play, after battle, was awkward and stilted as certain actors struggled with lines, covering it by drawing out a flat recollection of the words that muddled sense.  There were half a dozen stumblings over words throughout, and one older performer was difficult to understand.

The younger cast members were by far and away the best of this performance.  They were comfortable with the material and knew exactly how to perform antiquated language as common interaction.  The notable performance of the show came from Henry Stubbs as Sergeant. He was very engaging, and the character felt the most real.  George Comber and Matthew Mellors were also very good.

The scene where the staff all gather to gossip about their employers, giving downstairs opinions on what was happening upstairs was one of the best. Natural, well blocked, well executed, and warm within that cold paper castle.

The witches were very enjoyable, as these actresses always are.  They have a skill for conveying the enjoyment of behaving outside any well-behaved expectations.  The festival costuming, and rewriting of the witches as societal outsiders was inspired.  They were deliberately disconcerting, and unlike the mystical figures on the moor in Macbeth, these witches can be heard coming from a mile off, like a hen night at Glastonbury. Shakespeare would approve.

It was nice to see Tracey Wilkinson in a more substantial role as head of the witches.  Their role as traders in potions, heavily linked to drug dealing by Ross throughout, was interesting and felt like a rational translation of the “hocus pocus” for today, or, within the play, a more practical mindset than the paranoia of power.

Almost all of the costumes are modern in setting – male characters in camo, a suited noble, basic linen for household staff.  The modern imagery of the camouflaged soldier highlights the violence of life at that time of history, as they were permanently uniformed – ever ready to fight.

Lady Macbeth was the exception; she alone wore medieval garb.  Brianna Undy’s portrayal of her as spoilt modern aspiring rich girl with extreme entitlement and a hysterical need to enforce that entitlement worked well.  A slight touch of non-comic Veruca Salt brought the mental decay of the calculated character into modern recognition.  Unpleasant, but intentionally.  I have less sympathy for this Lady Macbeth.

The play is unusually static in large scenes, with a single type of prop – metal carafe and goblets – being overused.  Many scenes were men standing still pretending to drink.  This makes sense for staff, who have got the leftovers from upstairs entertainment, having a chat, but it’s visually uninteresting.

Ross masticated his way through all his scenes.  James Strath was good in the role and made the Shakespearean dialogue effortlessly natural … if only he’d stop chewing.

The battle scenes were visually, aurally and theatrically stunning, and the use of a battle drum throughout was very effective. The lighting was perfect and the original score by Susan Stevenson blended with the performance.

The second half was much more arresting, although one audience member fell soundly asleep.

Unlike Macbeth, Ross names Lady Macbeth.  No longer defined by her husband, “Gruoch” reveals Jeff Moule’s inspiration of Holinshed’s Chronicles, as it was the inspiration for William Shakespeare.  However, Shakespeare’s liberties with the tale were clearly observed in Ross, so that the two plays fit together.  Jeff Moule added extra dimensions to the story for Lady Macbeth, but does not alter the original.

I cannot answer the question of whether this stands alone without knowledge of Macbeth.  I know Macbeth well enough to autofill the original around the new and can’t look at it as though I don’t know.  You will have to see for yourselves.

Ross continues until 16th November, at 7.30pm each night, at the Strutt Community Centre.
Tickets cost £10. There is a cash bar.