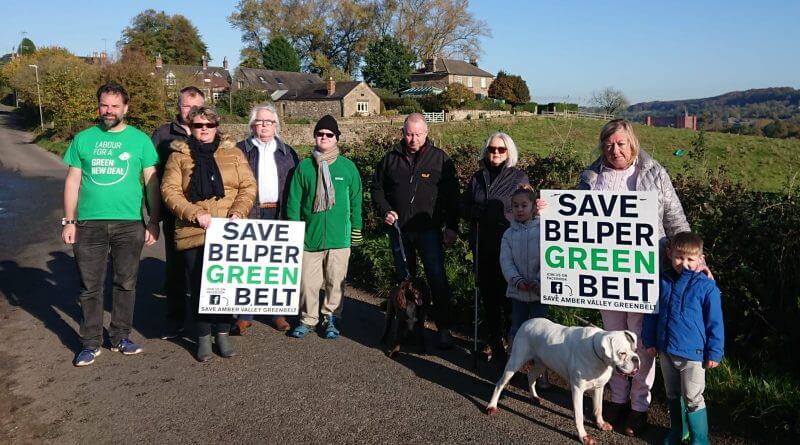 Kevin and Jayne Sweetings fell in love with The Chevin almost as soon as they moved into their period home on the western-outskirts of Belper over 35 years ago.

One of Kevin’s earliest memories of living on Chevin Road, involved taking a walk across open fields on crisp autumnal mornings, before coming back to the warmth of his home to gaze out of the kitchen window at one of Derbyshire’s most famous, unchanged countryside views – the iconic Belper Mill, the birthplace of the industrial revolution.

Having enjoyed living in this rural idyll, made-up of characterful cottages, historic farmhouses and agricultural fields, for almost four decades – Kevin and Jayne have now had to join a new community campaign group which is seeking to protect this unaltered landscape from the threat of development and new housing.

Despite having no history of taking part in a public protest movement before, Kevin and Jayne signed-up to the Save The Chevin’s Green Belt action group, which has sprung up this autumn to oppose a proposal to build new houses on land located within 250 metres of the world-renowned Derwent Valley Mills Heritage Site.

“Having enjoyed a quiet life on The Chevin, surrounded by friends and neighbours in what is a close-knit community, I never imagined that someone would try to apply for planning permission to build new houses on land that lies within such an important and historic landscape,” says Kevin.

“We’ve all been very upset to think that the precious green belt of Belper could be eroded and that’s why we’ve joined a protest, which aims to protect and conserve this unique cultural setting for future generations to enjoy,” Kevin explains. “And that’s why, for the first time in our lives, we have decided to pick up a placard and campaign to protect Belper’s heritage.”

Kevin was quick to praise the local ward councillor for Belper North, Ben Bellamy, for giving his backing to the community action group. “Ben does an amazing job for the local area. He is so passionate and cares about our community,” he says. “It is great to have his support and all the residents feel so appreciative for that.”

Councillor Bellamy – who has been at the forefront of the campaign to protect the green belt across the whole of Amber Valley explained why he was backing the campaign to protect The Chevin’s green belt. “It doesn’t matter whether applicants want to develop ten fields of green belt or ten meters – we’re not prepared to give an inch,” he says. “Quite simply there shouldn’t be any development or housing on our precious green belt.”

Walking from Kevin’s Victorian house along a narrow single-track public footpath towards Chevin Road it is impossible not to appreciate the beauty of the area’s agricultural setting. “We fell in love with it straight away,” says Jayne. “We don’t want to see our green belt disappearing – this part of The Chevin is very well used by walkers, cyclists and horse riders. New houses will change the character of this wonderful place forever and that would be a tragedy.”

Standing opposite the location of the proposed new housing site, which is dominated by an open agricultural barn, once used for hay storage from a nearby local farm, we’re greeted by a group of placard-waving protestors enjoying the morning sunshine of the October half-term school holidays. At the front of the protest is Jo Hutchinson, a resident of Chevin Road for the last five years – and she’s quick to explain why this rural location is not appropriate for development.

“This land, in living memory, has never been used for anything other than agricultural purposes. It forms a backdrop to the famous well-trodden Midshires Way, a popular walking route throughout Amber Valley and beyond,” she explains. “If this corner of green belt disappears we fear what will go next. We all care so passionately about Belper and we love the Derwent Valley Mills World Heritage Site – and we believe the area should not change because it is so popular with residents, walkers and visitors.”

And almost on perfect cue, we bump into a local walker and resident, Murkesh Paw, who is passing by with his dog, Ruby. “I love walking on this pathway but in recent years there has been a definite increase in cars and lorries – and I hate that,” he says. “We must preserve these places and I am delighted to offer my support to the Save The Chevin’s Green Belt group.”

Another local resident Wendy Gough, who recently purchased a property opposite the proposed development site, expressed concerns about the erosion of the town’s green belt. “If this area goes, we genuinely worry what could be next,” she says. “I hope the planners consider this application very well and then reject it, as it is not appropriate to the local setting.”

The planning application to Amber Valley Borough Council (listed as AVA/2019/0874), seeks to build two new residential properties, and it has attracted a number of objections from local consultees.

One objection comment said: “Even though each application is judged on its own merit, it would be difficult to prevent wholesale development all along Chevin Road with its roadside land being undeveloped for most of its length.” And another consultee argued: “The site is within the green belt. The land is agricultural. It has never been used for residential purposes.”

Adrian Farmer, Heritage Coordinator, Derwent Valley Mills World Heritage Site, has also written to planners expressing concerns about the proposed development. In a public consultation response he says: “The harm to a heritage asset of international significance is unlikely to be outweighed by any public benefit of the private development of two dwellings.”

Planners are expected to make a decision on the proposed planning application in early November 2019. “We’ll just have to wait and see what happens,” says Kevin Sweetings.

2 thoughts on “Save The Chevin’s Green Belt Campaign Launched”