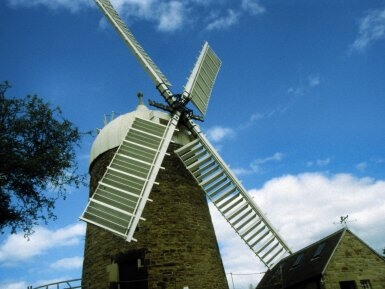 After some 4 months of intensive part time work by the maintenance team at Heage windmill, led by David Land (Maintenance Manager) two new sails are ready to be replaced on the Grade 2* six sail windmill at Heage. About this time last year the Trust were advised that, due to wood rot, two sails needed to be replaced in the near future. There are a limited number of millwrights in country able to undertake this work and delivery time quoted was about 2 years!

Our team felt that they had the skills and knowledge to be able to make them much sooner and set about investigating a supply of suitable timber, preferably Siberian Larch. In due course they tied up with Constructional Timber Ltd of Barnsley, who could supply the total of 84 separate pieces of wood needed for the two sails, ranging in weight from about 1000 pounds for the main stocks to a few pounds for small components. They could also cut the eight large mortises which go right through the stocks on each sail and which have to be accurately set at a different angle for each hole.

On the 29th of May the two damaged sails were removed by a mobile crane and we took delivery of the new timbers which were installed in the Windmill’s marquee on site; this was to become the new workshop. From that date on, Tuesday and Wednesday mornings were allocated as ‘sail’ days (although other routine works such as grass cutting had to be accommodated) .

All the knots in the wood were sealed and then the entire surface area of all the timber was treated with a specialist undercoat of paint. Slowly at first, the various pieces were assembled, fitting the eight heavy sail arms into the mortises being the most difficult job. As time went by the method of working developed and things went quicker until on, Wednesday 20th September, the last of the 42 old shutters, which had been refurbished, was put in place. Some pieces of the heavy iron work which operate the shutters, taken from the old sails, was re-assembled and the job was virtually done.

It is planned to replace the sails during the week starting October 7th, but this will be weather/wind dependent. It has been estimated that about 600 man /women hours of work were required for all this work and the cost, at about £20K, was a third of the bought-out budget price. Heage Windmill Society really appreciates this example of a concerted voluntary effort by all involved, rallying round to keep this major tourist attraction fully operational. Heage windmill will end the 2019 season with a full set of six sails once again!