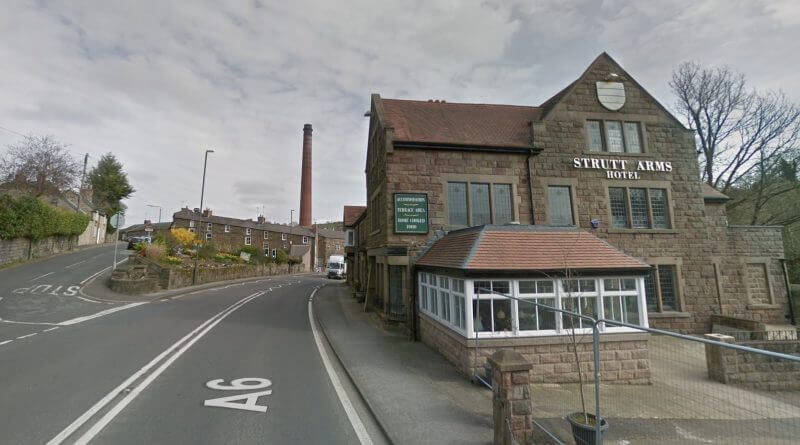 A long-derelict pub in a Derbyshire village is finally set to reopen its doors – but locals fear “excessive noise, loitering and low-level criminality”.

The Strutt Arms Hotel, as it has been renamed, on the A6 through Milford, closed its doors nearly a decade ago but is now set for a new lease of life.

Plans to reopen the venue, as a restaurant, bar and hotel, have been submitted to Amber Valley Borough Council.
Its licensing panel will decide on the venue’s application at a hearing on Wednesday, October 2.

Controversy has rocked the reopening of the site, however, with residents opposing plans to sell alcohol and play music late at night and into the early morning.

The venue would have 11 bed and breakfast rooms on the first floor, and around 200 covers in various areas such as the restaurant, bar, conservatory and patio on the ground floor.

Meanwhile the car park has 26 spaces.

The plans for the reopening of the venue, close to the River Derwent and Milford Bridge, have been submitted by Ben Corner, who is in charge of the neighbouring Soi Kitchens restaurant and the Slice of India buffet near Mansfield Road in Derby.

Borough council licensing officers have said it would be acceptable to have alcohol sales from 9am until midnight Monday through Thursday; 9am until 1am on Fridays and Saturdays; and 9am until 11.30pm on Sundays.

The applicant has applied to play recorded background music until 1am Monday through Saturday.

Council officers say that if the music would only be played in the background, it does not require a license.

Officers also said that live music could be played until 11pm Monday through Saturday and until 10.30pm on Sundays.

In total, 11 members of the public have written to the council to share concerns over the noise and disturbance that they feel could be caused by the venue if it was allowed to operate under the proposed hours.

They do, however, welcome the proposed reopening of the venue and would rather that it is not left derelict.

One opposing resident wrote: “Almost all the pupils walk past The Strutt Arms on their way to and from school. An establishment open for business of this type for the entire day is surely not the environment we want in such close proximity to young children.
“Also worrying are the potential noise, extra traffic and the possibility of public nuisance and criminal behaviour until well after midnight.
“On a more positive note, after the renovations of this business which has taken a very long time, I would rather the building were used than left in a dilapidated state.”

Another concerned resident wrote: “The Strutt is close to a residential home for the elderly and numerous cottages and houses nearby which will encounter excessive noise and loitering in the early hours.”

Meanwhile, an objecting resident wrote: “The Strutt Arms Hotel is situated in a quiet conservation area and the prospect of late-night drinking and the impact of noise and potential disruption from customers entering and leaving is not in keeping with the area.”

One resident said: “I am not opposed to the opening of the Strutt Arms, but am seriously concerned about the impact of the requested hours on the local community, especially considering that it is in a world heritage site.”

Finally, another objecting villager wrote: “I personally worry that the increased live music license in the village will bring more low-level criminality to the area and potentially lead to greater problems.”

One thought on “Plans For Reopening The Strutt Arms”