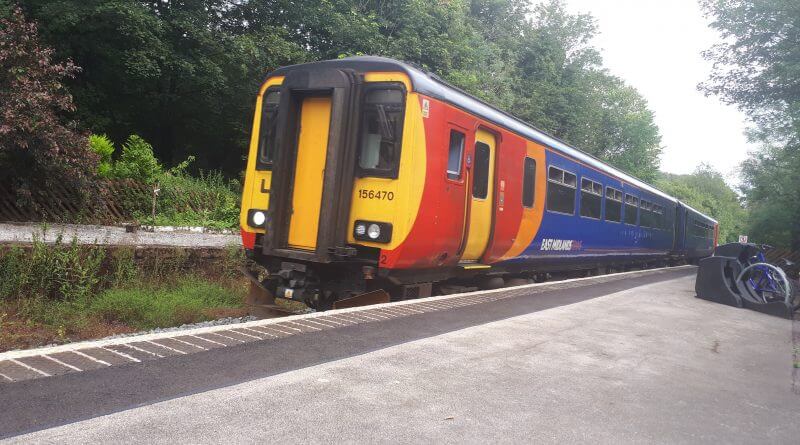 This morning East Midlands Trains were just telling those leaving for work to carry water, but as temperatures rose at predicted levels, they began to issue advice not to travel.

At 9:45am they announced that many trains would be travelling at lower speeds:

“Disruption to services as speed restrictions imposed due to high track temperatures.

Safety Measures imposed on rail network amid warnings of record UK temperatures. Customers advised not to travel on East Midlands Trains services to and from London on Thursday 25 July.

Speed restrictions are being introduced across wide parts of the UK rail network as a result of the record UK temperatures forecast for today.

Our focus is to ensure our trains and our stations can be safely used by our customers and as a result of the speed restrictions, we have to run a significantly reduced timetable to and from London throughout the day on Thursday 25 July.”

A blanket speed restriction of 60 mph was imposed at 11:30am and this will be in force until this evening.  In some locations, notably where new rails or points have been installed, the speed limit is 20 mph.

As a result, train travel will take longer than usual, and some services will be unavailable or restricted. The situation is being regularly reassessed.

East Midlands Trains intend to run the full timetable on local services.  Although there will be disruptions caused by the speed limits and other timetables having to change.

There is an alternate timetable for the London/Nottingham/Sheffield route, updates and departures can be found HERE.   There has not been any issue announced with the rails locally.  The disruption is due to problems south of Leicester.  The reduced service to/from London St. Pancras is due to heat stress on the track between Leicester and London.

Customers travelling to Bedford will have to go Luton instead.

Customers travelling to East Anglia are advised that there is a “severely reduced” service there and they are warning people, “DO NOT TRAVEL unless absolutely necessary.”

Travel in London is operating on only 50% of the usual service.

Travel to Leeds, Wakefield, and Doncaster will end at Sheffield for East Midlands trains but they state that for today there will be some service from Cross Country trains.

There are no alternative routes.  East Midlands Trains stated,  “As the high track temperatures are affecting the whole of the UK, Network Rail are implementing speed restrictions and safety precautions on most routes. Alternative routes are not viable as all Train Operators will be running a considerably reduced service in order to maintain a safe railway for our customers … We strongly recommend you DO NOT TRAVEL TODAY, July 25th 2019. ”

Hotter countries travel by train; why can’t we?

Although they can be pre-stressed to withstand higher temperatures, National Rail state, “In Britain, the variations in short-term weather and long-term climate mean that it is neither practical nor cost effective to implement these measures permanently on the British rail network.”