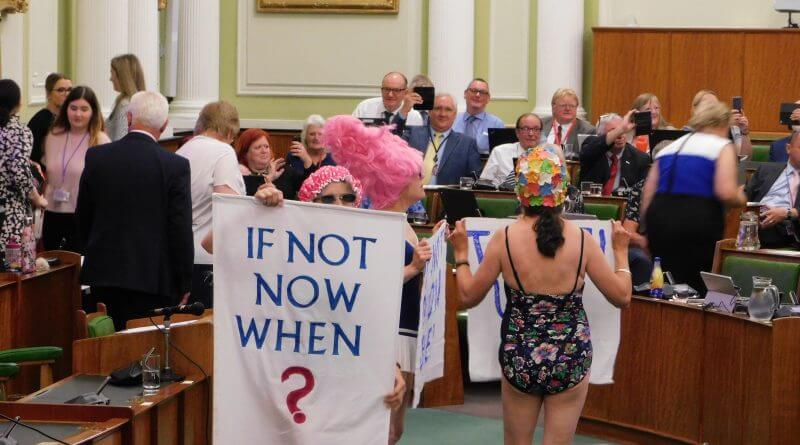 Around a dozen members of the campaign group took part in the protest on Wednesday 17th July, with three members entering the council chamber itself – dressed in swimsuits and extravagant wigs.

The protesters stood in front of the chairman’s podium and exclaimed that “it’s so hot”.

Meanwhile, other Extinction Rebellion members in the public seating area unfurled a long piece of blue fabric and ruffled it to make it look like a turbulent ocean.

The ‘swimmers’ proceeded to slowly ‘drown,’ and ‘refugees’ entered the scene wearing life jackets saying: “We just didn’t have time to adapt.”

One protester held a sign saying “If not now, when?” while another sign read “climate emergency, no time to adapt, act now!” and another sign said “if not you, who?”

“People gonna rise like the water.
“’cause the system’s let us down.
“In the words of my great granddaughter.
“Climate Justice now…”

The county council chairman, Cllr Trevor Ainsworth, promptly ordered councillors to evacuate the chamber until the protesters had been escorted out.

Protesters moved in after a question was asked by a member of the public.

He had asked how far the authority had advanced its climate change, green and carbon neutral agendas since the last full council meeting.

This is when the three female protesters stormed the council chamber with placards and protesters in the public seating area unfurled their signs – which had been hidden under their clothing.

Bag searches had taken place before the meeting.

A quote released by Extinction Rebellion after the meeting said:

We are already seeing local flooding, wildfires and the impacts of climate heating on Derbyshire residents and wildlife.

We are taking action to hold the county Council to account and we will keep on demonstrating until they start taking meaningful and measurable action that reduces emissions.

During the council’s last full council meeting, in May, the authority stopped short of formally declaring a climate change emergency and the setting of formal date targets by which to reduce carbon emissions.

At May’s meeting, more than a hundred protesters, including those from Highfields School in Matlock and Extinction Rebellion rallied outside of County Hall.

During that meeting, a protester stormed the council chairman’s platform wearing a shirt reading “rebel for life”.
Numerous councils around the UK have declared a climate emergency and announced aims to make their authorities carbon neutral by 2030.

The county council launched its climate change and carbon reduction manifesto in May.

It says that the council will do all it can to reduce its carbon footprint, cut waste, reduce emissions and improve the environment.

One pledge is to reduce greenhouse gas emissions from the council estate and operations by 55 per cent by 2022.

Meanwhile, also in May, the council pledged to report back within six months with the “actions and road map that the council will take” to address carbon reduction.