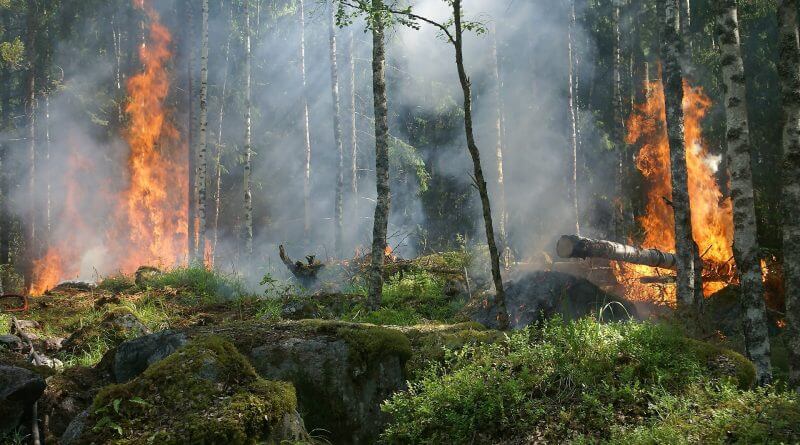 On Sunday 14th July, there were three incidents involving fire in Belper woods. The incidents don’t appear to be connected.

Rowan told us, “It was where a heavy branch – a feeder log had been placed over a fire. When I got down there, I saw that the log was alight. There were stones that had been placed to support the log. There was grass that was singed and smoking and the earth and stones underneath were red hot. The undergrowth around was very dry and there were low hanging branches. It was by where some kids had obviously have set up a den, there being tree climbing ropes and a piece of wood tied beneath a tree. I moved the tree branch to a safe place as best I could, kicked out the fire and the stones and waited to see if there was anybody around who might have had something to do with it. Nobody appeared. The fire was obviously deliberately set. It probably wasn’t done maliciously, but it was certainly left dangerously. It was probably kids, but it could have led to a dangerous situation because of the dry undergrowth and the overhanging branches.”

On the same night, in the same woods, Nik Thompson, described finding what appears to be the same fire, alight for a second time, and extinguishing it with water from the cemetary.  Nik said, “it was smouldering away with a field of dry grass below and a whole woodland above.”

The same night, on the other side of Belper, in Belper Parks Nature Reserve, near the Market Place, Nansy Ferrett-Paine and her daughter Iggi were visiting friends and spotted a more serious and deliberate fire. After calling the fire brigade, they attempted to tackle it with the help of friends.

Nansy told us, “We found a very large and very well built fire beneath some small trees. Everything was dry and the fire looked as though it was made with the intention of causing a lot of damage to the woods. We did our best to pull out some of the branches and put them out, but it was so hot. Emma brought up a fire extinguisher which helped a bit. The fire brigade came very quickly and when we returned to Emma’s garden we could see their torches for quite a while, so they must have been doing a thorough job. Iggi was quite shaken and I still feel really angry that someone would do this to our beautiful woods. Damage will have been done to trees and habitats and insects, but it could have been, and was intended to be, so much worse.”

We spoke to Derbyshire Fire and Rescue, who told us that they had been called to a fire in the Nature Reserve at 22:18, parked at The Coppice and tackled a 2 metre by 2 metre blaze with water back packs.  They assessed that the fire was “suspected deliberate ignition” (arson) and had referred the case to the police once it was extinguished.

Derbyshire Constabulary told us that they had taken the call from Derbyshire Fire and Rescue at 22:45 with a crime assessment logged as arson.  Derbyshire Constabulary had not been to the site when we contacted them, and said that there is little they can do without the community giving them information.  There is an open investigation on the arson and they asked for residents to report if they had seen any suspicious activity, such as anyone entering the Parks before the fire was discovered, or if parents noticed children smelling of fire smoke when they shouldn’t.  They also asked that Belper residents report any other fires that occur.  Without reports they cannot investigate properly.

We also spoke to Amber Valley Borough Council, who are responsible for Belper Parks, and they had no idea that there had been a fire.  We gave them the crime number and details of the fire, and they said they would assess the damage that had been done.  They had “no comment” at that time, as they had no knowledge of the incident.

Residents need to be aware that people are setting fires in Belper woods, which are too dry to cope with fires during summer weather.  Whether a fire is the result of irresponsible or deliberate actions, the potential damage is the same, with risk to life, ecosystem, wildlife and woodland.  Some of our woods border directly on houses.  All of our woods are used by residents, risking human life.

No fire should be started in any of our woods during summer.  In April, a huge fire destroyed historic woodland at Beggarswell Wood in Ambergate, which is part of Shining Cliff Woods.  That fire was started by a discarded barbeque.

If you think you can help police with the Belper Parks arson, please get in touch with police using one of the following non-emergency contact methods.

Please quote the reference number 19*368122 in any correspondence.