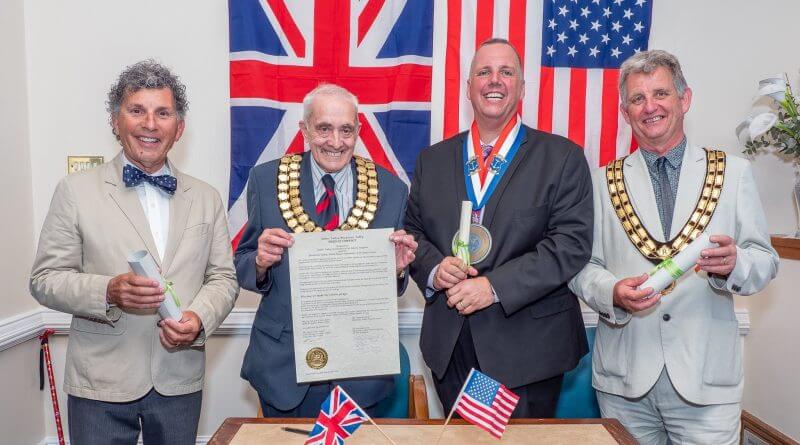 Continuing the Belper adventures of our Pawtucket twins from yesterday …

After a trip to look at the economic regeneration and restoration of the final part of the Derwent Valley Mills, at Cromford, on Friday, our Pawtucket visitors went to be part of a renewal of vows for the marriage of our two “pond” separated places. 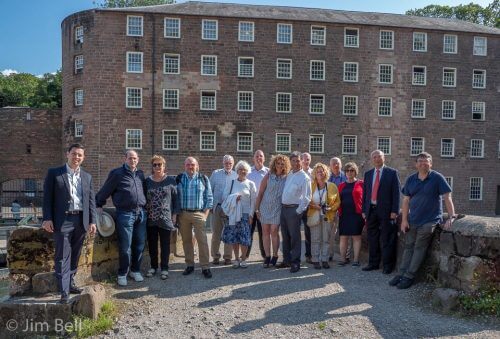 Second Signing of the Compact

At the Amber Valley Borough Council headquarters in Ripley, the Mayors of Pawtucket, Amber Valley, and Belper, and the Blackstone Valley Tourism Board, all took part in a Resigning of the Compact of twinning, to reaffirm our relationship.  This is an agreement between the local governance of the places, to develop closer ties and enhance economic, educational and cultural opportunities for the citizens of all participating places.

On Saturday it was the 270th Anniversary of Belper Market, which started in 1749, 40 years before Samuel Slater departed Belper for Pawtucket.

Adrian Farmer, Co-ordinator of the Derwent Valley Mills, and local historian, called the market-goers to attention, and gave a short speech informing people of the occasion.  A triple birthday cake (1 cake for each digit of the birthday) was brought out, and Mayor Simon Mallett said a few words.  Sarah Barley-McMullen from the Pride in Belper stall made the event more special by calling on everyone to sing Happy Birthday.  Adrian Farmer blew out the candles on the cakes, which Simon Mallett cut and handed out, starting with the Mayors of Pawtucket and Central Falls.

The market stall holders had been asked to dress in period costume for the event but only three did, the Staffordshire Cheese Co. stallholder, calling herself “Madame Mary”, and Kim Kerry and Heather Stead from Done in Yarn.  They were in costume and character, which made the event more special.  It was a shame that more didn’t take the opportunity to create a complete atmosphere of history and celebration.

The Market Place is named such because the market existed before it, when this area of the town was just a grassy area, and Belper, which was then a village, only had one shop, and its own nail-based currency.

Unveiling of the Twinning Plaque

Construction is soon to start on the new Swiss Tea Rooms, in the River Gardens.  When the Tea Rooms are complete, there will be a plaque on the side of the building, marking the twinning, and the long friendship between Belper and Pawtucket.  This plaque has just been made from bronze, to endure for as long as possible.

On Friday 12th July 2019 this plaque was unveiled at 12pm, by Councillor Ben Bellamy, who gave a brief history of the gardens and the renovation of the Tea Rooms, with the Mayors and guests from Pawtucket.  Four additional small plaques had also been made as souvenirs for the visiting Mayors and original twinning representatives.

There was then a tour of the River Gardens, which ended with boating on the Derwent.

Tomorrow we’ll tell you about the Twinning Concert held in their honour.