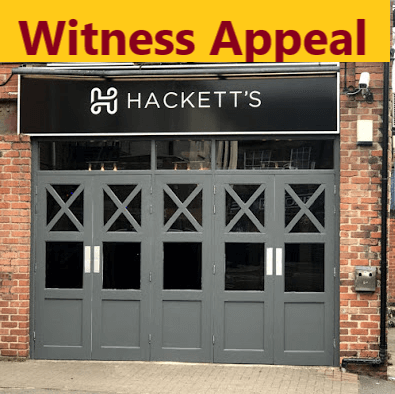 On May 19th, at approximately 2am, two men were assaulted outside Hacketts by an as yet unidentified stranger.

Two days ago the victims, Blaine Chapman and Andy Nye, put out a Facebook request for witnesses, stating that they felt that the police were not investigating.   We looked into the matter.

We spoke to Blaine Chapman, who told us he and his friend were waiting for a taxi outside Hacketts after celebrating a friend’s birthday when they were attacked.
“The taxi pulled up and Andy walked over to the taxi. I was stood on the corner near Boots talking to a couple that was waiting for a taxi. A lad ran up and attacked Andy with what looked like a large bottle in a carrier bag. The attacker then ran over to me as I had my back to him and hit me twice around the head. Andy lost several teeth and I suffered a black eye and markings to the face, a broken cheek bone and a fractured jaw.”

We asked if the attacker was known to them, but they didn’t see their attacker.
“No, didn’t see him as (he) ran up behind us. There was a couple that witnessed it that said he crossed the road at the bottom of kind street coming from the petrol station and ran up King Street where we was stood waiting for the taxi.”

We contacted the police to request what information they had and find out why we had not been sent an appeal for information.

The officer in charge of this case was contacted, and Derbyshire Constabulary issued the following repsonse:

“Officers were called following an assault in King Street, Belper, in the early hours of  May 19.

“The two victims of the assault were visited to give first accounts, however, limited details were available. The only description of the man believed to have committed the assault is that he was wearing a grey hooded top.

“Further investigations, including speaking to other witnesses to the offence and CCTV trawls, have taken place.

“A media appeal was requested by the officer investigating the offence. However, this has not yet been issued because of the limited information available and also because we are checking whether there is any useful CCTV that would help us, or the public, identify the offender.

“We take incidents such as this seriously and we would urge anyone with information about the assault to contact us on the 101 number with reference 19*255831.”

We have permission to share potentially distressing images of the injuries caused, but have decided that as the focus is to find witnesses in the search for a different person, that this might confuse the issue needlessly.

If you have any information about the perpetrator, or if you witnessed any part of the assaults on May 19th, please contact the police, quoting incident number: 19*255831