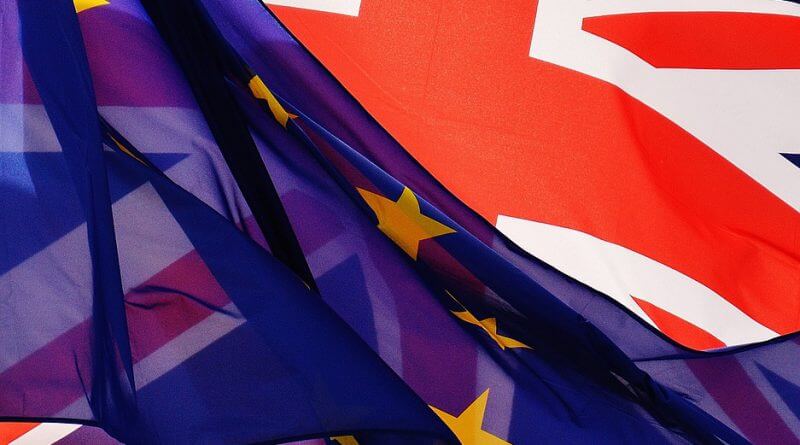 This is the live feed for updates, information, and results of the EU election.  We will cover the East Midlands region which our readers voted in, and the results for the UK.

UK ballots are being counted.  The count started around 7pm.  Results are expected from 10pm onwards.

The current prediction for the East Midlands is 2 Brexit Party, 1 Liberal Democrat and 1 Green, with 1 indeterminate.  The impact of the Independent Network is an unknown variable, as is where the protest votes are going for Remainers.  Conservative Party and Labour Party are expected to lose out across the nation, and especially in the East Midlands where both parties are being largely rejected across in favour of alternatives offering solid Leave or Remain stances.

Nailed will be online if any candidates or local parties wish their comments to be included – contact Nailed through EMAIL or Facebook.

Nailed’s Live Feed runs down in chronological order, so that it makes sense to anyone reading outside of real time.  The newest entries are always at the bottom of the article.

So far it seems that turnout has increased significantly in some areas, and decreased in others.  Wales has had the highest increase in turnout, rising from 32% to a depressing small 37.3% of eligible voters.  EU elections always attract far fewer voters than all other forms of election, due to voter confusion, lack of information, and the fact that most people are only concerned about that which directly affects them.

Opinion polls suggest that Nigel Farage’s policy-free Brexit Party could win large numbers of seats, due to all the other Brexit parties having disappointed voters.

22:40
Councils are declaring and The Brexit Party are hovering around 30%, with the Liberal Democrats following at around 20%

Jeremy Corbyn and Theresa May have seen their parties lose in their own constituencies.  Corbyn’s Islington to the Liberal Democrats and Theresa May’s Maidenhead to the Brexit Party.

The Amber Valley results reflect the opinions of just over a third of the electorate.  The other 63.52% couldn’t be bothered to vote and their opinions are unknown.  It would be grotesquely irresponsible for anyone to claim that this small turnout was representative of local opinions.  People have been confused by Labour’s stance, which makes it difficult to make any kind of Remain versus Leave statement.

Nigel Farage sniped at Conservatives and Labour.  He treated the results like a second referendum and predicted that the results would be repeated in any future general election if a No Deal Brexit was not delivered.  The Brexit Party will have no influence on the Brexit process, as MEPs have no role in negotiations, which are over, so it seems that this was the extent of their efforts.  British voters have never given a new party an influential number of politicians within their first year of existence.

Ann Widdicombe has been interviewed by the BBC and confirmed that the Brexit Party has no plan to do anything at all.  They are treating the always low turnout EU elections as a mandate.  They are hoping that the next Prime Minister will be afraid of them and do as they want, without having any influence on parliament.  Ann Widdicombe didn’t understand that Brexit negotiations were concluded, not ongoing, and that there was no plan to re-open them.

There are two UK regions left to declare.

Of course, these percentages are only a percentage of those who voted, which is only 30-40% of the electorate.

The England and Wales results are complete now.

Overall the votes for Leave and Remain parties are 40.4% Remain and 34.9% Leave, but the proportion of the country this represents is just over a third.  Politicians and big media are only focusing on the Brexit Party %, and claiming that this means that Brexit must be delivered. The Brexit Party result reflects how organised they were in managing to get Leave voters out to the polls for a single party, as opposed to several.

The judgement of all the votes, including the lack of voting, reflects disaffection with current leadership and its opposition, but little else.  Taken together with local election results, there seems to be a much larger number of people backing remain parties.  Those elections also had a turnout of less than half of the electorate.  Over half of the eligible population aren’t speaking at all.  Turnout for the referendum was about 76% of the electorate, but attitudes have changed in many ways since then, with both extremes becoming more extreme and larger in their support.
These results cannot be used by either side with any confidence, to represent an issue which the vote was not directly intended for.

Sir John Curtice stated that support for the Brexit Party is actually at 15%,  despite the distortion of only seeing the stance of the 35% of the electorate who voted. Sir John Curtice is a political scientist who is currently Professor of Politics at the University of Strathclyde and Senior Research Fellow at NatCen Social Research. He specialises in electoral behaviour and researching political and social attitudes.

No party wins an EU Election.  They do not become the leader of anything.  They do not become the dominant party. A seat is a seat.  All of these seats join into groups with seats from other nations within the EU.  The results reduce the power of the political middle ground and old establishment power, and they increase both far right and liberal influence. No MEPs are involved in Brexit negotiations, which are not ongoing, and are complete.

Theresa May has made no comments for the Conservative Party.

Gerard Batten has made no comments for UKIP.

Jeremy Corbyn issued a single statement for Labour before results were complete: 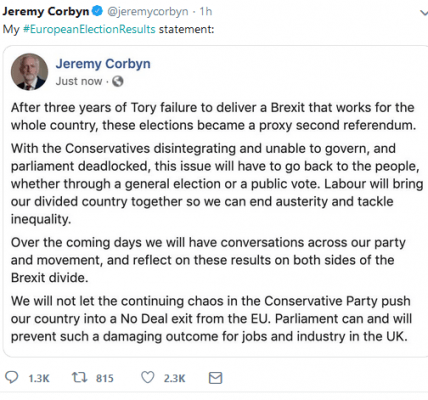 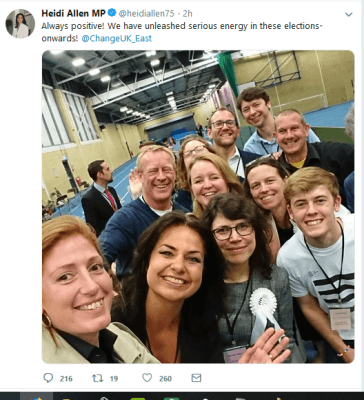 Marianne Overton has not made comments for the Independent Network since results have been announced.

Scotland’s results are expected late Monday morning.
Northern Ireland uses a different voting system (single transferable vote) and these won’t be counted or reported until late Monday due to religious restrictions on counting on Sunday.

These last two results will be added here on Monday afternoon.

Labour have been demolished in Scotland.  Scotland has always been important for getting a Labour government into power.  If the current antipathy in Scotland for Labour’s Brexit stance carries over to a General Election, which seems inevitable, it will be difficult for Labour to win such an election.

Northern Ireland use a different voting system to us.  Firstly, they vote for candidates, not parties.  Secondly, after the first round of counting, candidates get eliminated for having low votes, and those votes get given to other candidates, who voters named as their second choice.   The top three entries have two numbers each.  The first is the number of voters who chose that party outright.  The second is the number of votes they have when votes were transferred to them from the secondary choices of voters, once their first choice candidate was eliminated.

The results for the United Kingdom are complete.

The Brexit Party dominate results, although votes for Remain focused parties are higher in every calculation.

The split is still close.  But it needs to be remembered that these figures are based on the extremely low number of people who voted.  Although voting was up on 2014, EU elections, always have an extremely low turnout.

To actually have a functioning democracy, more people need to vote in every election, be it local, national, or international.  Without better representation of the people in the polls, Britain can never be fair in its governance, and is always prone to being exploited by manipulative and populist factions who can mobilise on a simple issue.  This won’t happen until British people realise how much depends upon elections, and how horrific the consequences can be when they get it wrong, or don’t vote.

The clear message of this election, returned by a minority of the country, is that neither of the two main parties can rely on their own appraisals of voters.  They have been judged, and it’s not in their favour.

The Conservatives, who got 9% of the national vote, seem to be on the way out of power.  Labour, who would like to take power from them, are now threatened by the Brexit Party, whose members are former UKIP and are mainly far right with  many problematic attitudes and serious misunderstandings of how things work (see all elected MEPs stating that they should be involved in discourse which is already complete), who without a manifesto, and with only one aim, cannot be trusted to run the country better than the Conservatives, with the difference being that the Conservatives, despite their economic incompetence and callous disregard for the masses, have a historic structure to support them and their candidates have been educated for it their entire lives, whereas Brexit Party candidates, in the main, have none of the education and no experience at all.

The problem with the voter focuses not being supported with elected candidates, lies in the fact that all Leave voters are channelled into the Brexit Party, unless they have a lifetime allegiance to one of the two main parties.  Yet Remain voters are split by the fact that they don’t only think about Brexit, and their votes go to various parties with different manifestos.  Those Remain votes need to come together if those parties are to fight the brute force of the Brexit Party.  The Lib Dems, Green Party, SNP, Plaid Cymru, Sinn Féin, Alliance, and ChangeUK all need to find a way to legitimately band together.  And if the Labour Party is to survive in this polarised landscape, it needs to get off the fence and team up, because recent votes prove that it isn’t going to get a majority on its own.