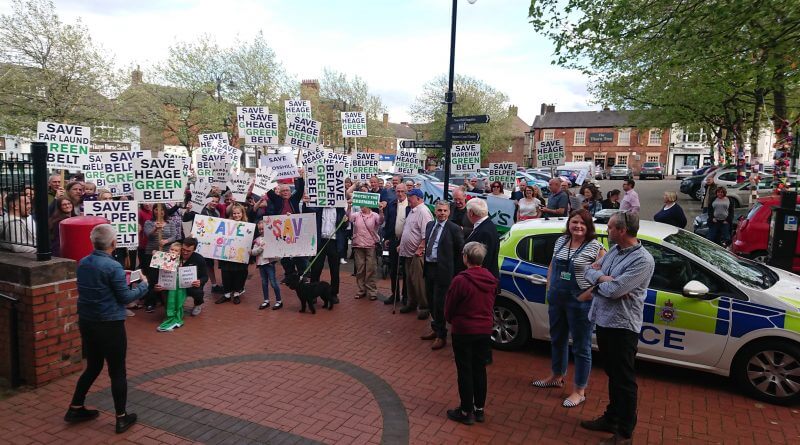 Last night, the Save the Green Belt Groups of Amber Valley gathered to protest once more to protect the Green Belt from development, as a new council was sworn in to decide the whether the Local Plan stayed or got scrapped.

It was the intention of the incoming Labour administration to scrap the Local Plan.  This move was backed by the protest groups, and by Amber Valley’s Conservative MP, Nigel Mills.

The councillors told us that “scores of protesters” cheered as they moved and passed a motion to scrap the Borough’s controversial Local Plan.

As detailed in our previous coverage, a Local Plan sets out local planning policies and identifies how land is used, determining what will be built, and where. Once adopted they provide the framework for development.  Amber Valley hasn’t had an approved plan since 2006.

The previous Conservative administration had included 15 areas of Green Belt land, all located on the west side of Amber Valley Borough.   Bullsmoor was later removed after a ruling by the Secretary of State, and became Green Belt.

Labour told us that, “the protesters outside spent the meeting chanting ‘save the Greenbelt – Scrap the plan’, and were jubilant with the passing” of the motion to scrap the plan.

The votes were 26 in favour, 0 against, with 17 abstaining.  The current balance of the 45 seats on AVBC council is 24 Labour, 19 Conservative, 1 Green, 1 Independent.  17 of those Conservative councillors voted in favour of the plan that has now been scrapped.

The Labour Party reported that “the new Leader of the Council, Chris Emmas-Williams moved the motion, and the Conservatives then tried to introduce two apparently contradictory motions. One appeared to be an attempt to force the council to consider asking the government inspector if they could remove the Green Belt that they had themselves recently put in, and the other to keep just Marehay in the Green Belt.”

Councillor Bellamy said, “As we have been told for a number of years whilst the Tories have bumbled along failing to get a plan in place, as soon as their plan was finished a new plan would be required to be started.

“The Tories local plan is a very bad plan, threatening Green Belt across the borough , containing World Heritage Buffer land in Belper and dangerously contaminated land at cinderhill. No plan is better than a bad plan, but we will now commence on a new plan that protects our heritage health and greenbelt, and delivers the right homes in the right places”

Councillor Chris Emmas-Williams acknowledged that this could be the council’s last chance to get a plan in place.  The risk being, that if progress isn’t seen to be made, it could be taken out of AVBC’s hand by central government and a plan could be imposed without local input.  Cllr Emmas-Williams also noted that the decision would mean that local communities would have to continue their fight to defend the land against inappropriate development, as they have for many years.

The incoming administration had already discussed the plans, risks and need for ongoing protest with the Amber Valley Green Belt groups in a meeting last week.  The difference now is that the protest groups are working with the council rather than against it.

Cllr Emmas-Williams said, “Even the local MP, a Conservative MP, has been calling for the plan to be scrapped and started again – it is the one issue that he is correct on!”

The council will now commence the process of drawing up a new plan, which could take between 3 and 4 years to get in place.

Labour also changed the constitution of the council to include a rule that 30% of new housing should be ‘affordable’. The previous constitution said, “up to 30%”, which was usually exploited at 10 or 15%.  All conservative councillors voted against the maximum becoming the minimum. The rule change was passed.

Chris Emmas-Williams said that “the change will mean that the starting point for developers is a minimum of 30% affordable housing. Any change to that will have to be signed off by the new chair of planning, Cllr Mick Wilson. As far as we are concerned 30% will be where they start – if they want to give more, then fine, but it will not be less.”

On the issue of the cost of a new Local Plan, which is estimated at £1.4 million, Ben Bellamy told us, “We were going to have to keep paying for the old plan, and indeed start a new plan as soon as it was finished, we are going to incur costs whether we stick with the Tories ‘carve up the Greenbelt plan’ or not. So talk about having to find more money to do this is frankly just more Conservative double counting.”

The Conservative administration spent £785,000 in 2 years on a plan which everyone hated and was called in for review by the Secretary of State.  The costs of the Local Plan are ongoing, regardless of whether a plan is stuck to or restarted.

Save Far Laund Green Belt group expressed their journey, their gratitude and their pride:

Last night the new AVBC voted to reject the local plan which was created by their predecessors. This plan contained 14 large parcels of protected green belt land, which would have been deleted for huge housing developments.

One of the largest sites was here on Far Laund, a 500 house development stretching from the east side of Belper to Jackson’s lane in Heage and effectively merging the two communities.

We started this (group) to raise awareness of a plan that was created in a very secretive way. We have done this with posters, signs, attending every meeting possible, produced leaflets, supported people with completing objections, protested and hopefully kept you all up to date throughout this difficult process.

Our (Facebook) page now has 1150 likes, more followers and a weekly reach of over 35,000. Although this page was initially created to inform people of the Far Laund site it has become a much broader audience, we have people joining us from all over Amber Valley and this is wonderful.

Although we are elated that the new council have stood by their election promises and rejected the plan there is still work to be done.

We are fully anticipating planning applications from developers to emerge over the coming days/weeks/months.

This is where we NEED YOU, we need everyone to be vigilant to any planning applications being submitted on these pockets of land. The sooner we know about them, the more time we have to read and oppose them.

The people of Amber Valley need to work together to support the council in opposing housing developments on green belt, contaminated or culturally and historically significant land.

We have never been so proud of our community.

Together we HAVE made a difference!”

Far Laund is just one of the many local Green Belt protest groups in Amber Valley who were represented at the meeting protest. Several groups were contacted for further comment but had not responded by the time we published.