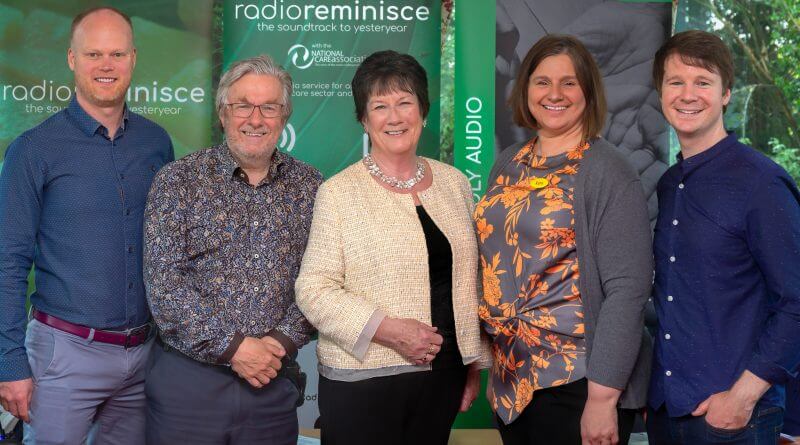 May 20th, the start of National Dementia Action Week, saw the launch of RADIO REMINISCE, a Derbyshire-based venture which is set to become a nationally known and highly cherished service for those living with dementia.

The service is available at radioreminisce.com

Radio Reminisce is a subscription-based online radio service for the older generation, the care sector and beyond. It provides a live 24/7 music stream from the home page, spanning songs from the 1940s through to the 1970s.

Subscribers can access a set of hour-long programmes called On the Wireless – presented by former BBC Local Radio and Saga Radio presenter Ashley Franklin – which mixes music and memories for every year from 1945 to 1965. In each show, Ashley plays the popular songs of a particular year and recounts the life and times of that year.

Ashley explained, ‘I reminisce about the music and the artists but also about radio, television, cinema, family life, food, drink, fashion, holidays, hobbies and sport. These are light, warm, entertaining programmes which we hope will help stimulate minds and bring joy, comfort and pleasure to listeners’ lives.’

Also available to the subscriber are quizzes tailored to seniors, chair yoga and ‘Songs of Praise’ style programmes for people who cannot get to church.

Radio Reminisce was founded by music publisher James Oldrini. As he reveals: “I’ve always been an avid radio listener and recognise that whatever your age, music is therapy for us all. We all have our own favourite tracks, songs that pick us up, those we relax to, and ones that help us think and reﬂect.

“Also, I’ve always been excited about the research into music and how it can really help stimulate memory in people living with dementia when nothing else can. And then I had this lightbulb moment. I suddenly thought, ‘is there anything like this for an older audience?’

“And I realised there wasn’t. I had become acquainted with Ashley Franklin and knew he was a former BBC music radio presenter, so I emailed him to see what his thoughts were. The excitement and enthusiasm that came back from Ashley, and the fact he was completely on the same page as me, gave me the conﬁdence to push forward and start to develop this.

“And when I heard the ﬁrst of Ashley’s On the Wireless programmes, it was a magical moment. I knew then that this would work.”

Ashley revealed, “When James approached me about his concept of Dementia Friendly Radio, my immediate reaction was ‘why, as a life-long broadcaster, didn’t I think of that?’ From then on, every time I mentioned DFA to family and friends, their instant response was ‘what a wonderful idea.'”

James and Ashley were even further convinced of the worth of Radio Reminisce when they trialled a few programmes at Milford Care, which operates ﬁve homes across Derbyshire and Nottinghamshire. The residents’ response was very favourable. “At last: some music for us,” said one resident.

It was such a compelling idea that John Stamp, a children’s care home director and with a background in music therapy, joined as a director and investor of Radio Reminisce, and it was John who instigated the ofﬁcial partnership with the National Care Association.

“We are especially reaching out to the 850,000 people in this country who are living with dementia, speciﬁcally those with early on-set dementia,” explained Ashley. “In a wider sense, we are aiming Radio Reminisce at the 70-plusses because they are the disenfranchised music radio listeners of this nation. There are nearly 12 million of them and it’s scandalous that there isn’t a radio service for them. We are here to provide.”

Radio Reminisce aims to appeal to the network of over 18,000 nursing, residential and care homes across the UK as well as the many thousands of people living with dementia who are being cared for at home. As well as being dementia-friendly, Radio Reminisce is also loneliness aware.  According to Age UK, more than two million people in England over the age of 75 live alone. What makes Radio Reminisce of great value to those living with dementia is that however much the mind gets damaged, the auditory system is unaffected, allowing in music – and memories associated with music. As the great neurologist Oliver Sacks said, “Music evokes emotion, and emotion can bring with it memory.  It brings back the feeling of life when nothing else can.”

James Oldrini concluded,  “Radio Reminisce aims to create a community, bring older people together, and get them talking with one another and sharing memories with their carers, family, friends and neighbours. I’m so proud to be a part of this.”

Pauline Latham, MP for Mid Derbyshire, tabled a question about Radio Reminisce at Prime Minister’s Question Time in the House of Commons on May 22nd.

Pauline Latham, “Would the Prime Minister welcome with me the launch of Radio Reminisce, a fantastic new dementia-friendly radio service, a subscription service designed to help and comfort people over 70 with early onset dementia, produced and developed in Belper in my constituency.”

Theresa May, “First of all, I thank her for raising this issue and for raising the issue of support for people with early onset dementia, and for highlighting this new audio service. As she will know, the government is committed to double spending on research into dementia by the year 2020. In relation to the radio service, this is obviously a very practical way of providing support for people with early onset dementia, and I’m happy to join our Honourable Friend in welcoming this excellent radio service. I’m sure it’s going to provide very important help to those who are suffering with dementia.”

For further information about Radio Reminisce please contact us at hello@radioreminisce.com /or call Ashley on 07971 920382.  The Facebook Page can be found HERE.