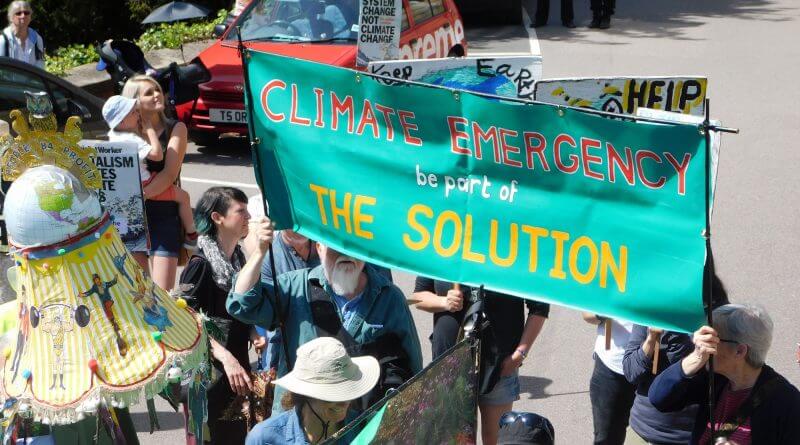 A motion calling on Derbyshire County Council to formally declare a climate change emergency and to set a target to become carbon neutral by 2030 was put forward by the Labour opposition.

Extreme weather events have caused damage and destruction in this country and have led to deaths and displacement of thousands of people worldwide. Natural habitats, wildlife and biodiversity are in peril.
Scientists are warning that we have a little over a decade to implement urgent action to reduce CO2 emissions before we reach a global tipping point.
Action is required at international, national, local and individual level to achieve the carbon reduction levels needed.

After hours of debate, the motion was eventually altered by Conservative leader Cllr Barry Lewis to stop short of declaring an emergency and to remove a target date for carbon neutrality.

It also states that “climate change may become an existential threat”.

The vote on the amended motion passed by 30 votes for, two against and 17 abstentions.

It makes a pledge to report back to council within six months with the “actions and roadmap that the council will take” to address carbon reduction.

This comes the day after the Conservative authority launched its climate change and carbon reduction manifesto.

The manifesto says that the council will do all it can to reduce its carbon footprint, cut waste, reduce emissions and improve the environment.  One pledge is to reduce greenhouse gas emissions from the council estate and operations by 55 per cent by 2022.

During the debate, Cllr Western said that the problem of climate change is “here and now”.

She welcomed the council’s new carbon reduction manifesto but said there was a danger it could make the situation an enhanced ‘business as usual’.

The council needs an “absolute step change”, she said, followed be a round of applause from the dozens of protesters in the chamber.

Conservative leader Cllr Barry Lewis overan his allocated time to speak and had to be cut short by the authority’s new chairman Cllr Trevor Ainsworth.

Cllr Lewis had made lengthy references to the history of climate change, all the way back to the ice age, talking through his previous profession as an archaeologist and current occupation as co-owner of a wine company.

He said that warmer climates in the UK could make it a wine superpower capable of competing with the Champagne region in France.
Cllr Lewis said that climate change “is as much about adaptation as it is about carbon reduction”.

He said it would not be right to ask other countries, such as China, to curb their use of carbon fuels to push forward their economies when the UK has done so with the industrial revolution.

Cllr Lewis said: “We all recognise the need to mitigate the impacts of climate change but we must make sure we don’t fall into a tailspin that damages the local economy.”

Lib Dem group leader Cllr Beth Atkins said: “I have seen hills in my division on fire because they are so dry. Plants, trees, animals and insects are being burnt, and if we are not careful, people too. I want to see action taken”.

Cllr Garry Hickton, Conservative, said that he would like to see bee hives on buildings across Derbyshire, as he says has been done by councils in London.

He wants councils in the county to push this policy. “If they (bees) don’t survive, we won’t” he says.

Cllr Western said: “The guts have been ripped out of this motion but I want to make a pledge to people that no matter what happens in this chamber today we will continue to work for them on this and get on with it ourselves.”

Derby City Council is also set to debate whether to declare a climate change emergency or not at a meeting on Wednesday, May 22.

A motion from Labour and Liberal Democrats requests that a climate change working group is set up to respond to the challenge. It also calls on the government to provide the necessary resources to allow Derby to hit carbon reduction targets.

A protester stormed the council chairman’s platform at County Hall after the long and heated debate on whether or not to declare a climate emergency.

The protester, holding a placard aloft and wearing a t-shirt reading “Rebel for life,” was just one of more than 100 who rallied at Derbyshire County Council’s headquarters yesterday (Wednesday, May 15) to call for urgent and swift action to combat climate change.

During the rally, several pupils from Highfields School in Matlock, spoke to the crowd, calling for strict promises instead of vague pledges.

One of the students, 17-year-old George Davidson, speaking on behalf of the YouthStrike4Climate Matlock group, said: “At the very least we want to get the council to say that it will give an urgent response to climate change and that something will be done.
“Something the council could be doing is to help fund better vehicles in its fleet, use electric cars, and we need more public transport.
“We need action now.”

A climate change protest is due to be held in Matlock on Friday, May 24 from 11am to 2pm, starting from Crown Square.