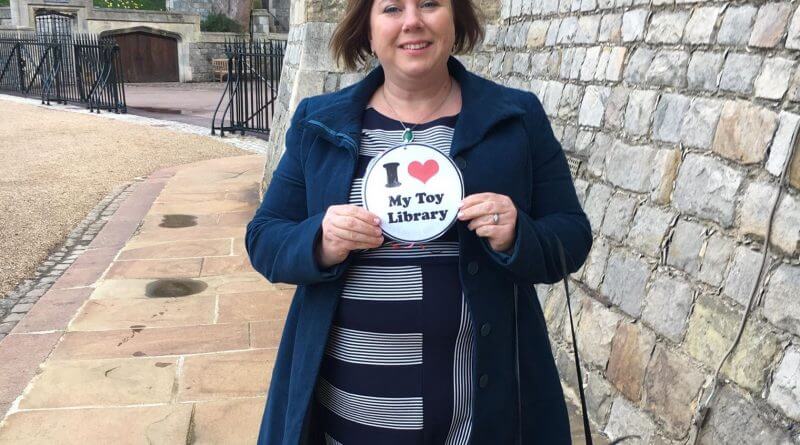 It was champagne and canapes instead of toys and a cuppa as Ann-Marie McMillan, the founder of Derbyshire Toy Libraries, visited the Queen at Windsor Castle at the start of April.

On the 2nd of April Ann-Marie McMillan, the founder of Derbyshire Toy Libraries, joined 200 other charities who were invited to a reception hosted by The Queen to celebrate 100 years of National Council for Voluntary Organisations voluntary work.

On the day the Queen, accompanied by other Members of the Royal Family such as Princess Anne, held a reception for a select group of volunteers and charities to reward their hard work and dedication to the community.

Ann-Marie McMillan said: “I felt truly honoured to be selected as founder of Derbyshire Toy Libraries who celebrated its 19th Birthday/Anniversary in May. Being amongst other amazing grassroots charities, has inspired and spurred us on and makes all the 1000’s of volunteer hours myself and other team members spent developing the Toy Library.”

The NCVO, National Council for Voluntary Organisations, represents and supports over 14,000 voluntary organisations of all sizes, from the biggest household-name charities to the smallest community groups. The reception marked the centenary of the NCVO, whose work goes all the way back to WW1.

Peter Kellner, chair of the National Council for Voluntary Organisations, said: “We are immensely grateful to The Queen for recognising the role of charities and volunteers in such a special way. It’s important to remember, particularly at this point in time, the strength of our communities and the many volunteers and charities that sustain them. Without doubt, the world around us would be a very different place without them and their incredible contribution.”

If you would like to know more about the Derbyshire Toy Library you can visit their site here.