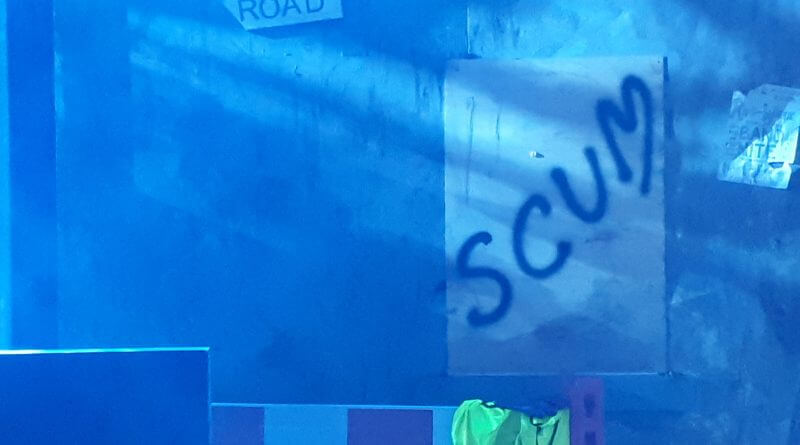 At two and a half hours, I think that this is the longest play which the Players have performed.  I advise you of this up front because it might be unexpected, as it was to several people, including a member of the press, who left in the interval, thinking it was over, when there was a whole hour left.

With the 4th wall removed in this play, the audience walks in to a blue lit, misty road and sits by the side of it (in new chairs, which are much more comfortable than the old ones), the pub is open with regulars chatting to the landlord, our host character Scullery is urinating off some scaffolding, there are pensioners in pyjamas up on the balcony, and someone is watching telly on their sofa, and some unintrusive ska influenced music moves you back to the 1980s, as the characters assemble.

It kicks off with a strong percussive start.  The Belper Players are still trying to rap, but this time, in this time setting, the lack of skill works very well with the discordant voices and punk focuses of the era.  The musical introduction establishes class, social context, and social attitudes, especially with the lyrics proclaiming the judgement of society upon the residents of the Road, “I’m scum!”

The show is sometimes very noisy.  Some of this creates the atmosphere of a populated and vocal community, and some of it is an acting choice where extreme volume is used to convey strong emotion.  The shouting (as opposed to projection) was alienating and aggressive, and I felt it didn’t work for those characters, whom we were meant to empathise with.

The show isn’t comfortable.  It’s like deliberately engaging with all the kinds of people one would normally avoid, which is really the purpose of the play, to face those we discard, and see what life on the edge of society does to people.  To see, in those we would disavow, pieces of ourselves, even if it is just the human propensity to feel emotional pain.

Although I’ve lived in Belper for the majority of my life, and never lived in such deprivation, I grew up in a town full of people like Road offers.  A town which was actually referenced in the play with the use of John Cooper Clarke’s Evidently Chickentown.  I’m from Chickentown (Stevenage), in the 80s.  And this play IS the 80s in Chickentowns.  It evoked a horrified recognition in me.  It opened a door which I didn’t want to look through again.

I deeply respect the Belper Players for choosing this play at this time in politics, as the socio-economic consequences of a similar Conservative government are  playing out again in real time. We need to open that door, take a deep breath, look those consequences in the face, and learn from our mistakes.

Our empathy was engaged mostly by deep views of individuals pushed to the very edge of society, an abused wife, a neo-nazi skinhead, a depressed couple, alcoholics, men (and one woman) manipulating people towards sex in what we now call “rape culture”.  Monologues and snapshots appear between communal group scenes.  The monologues were intensely performed and captivating, and they were immensely well recieved by the audience, prompting mid-performance clapping.

There is a very appropriate claustrophic atmosphere to the play, the feeling of being trapped is well conveyed.  The fact that the play has no overall plot, but instead focuses in on characters and situations, creates a poignant lack of direction which mirrors the lives on show.  The message is yours to create from what you experience 5 feet from their shoes.  They are “pressed leaves”, preserved decay, for your use.  As Scullery says, “the town, like the sign, has been broken for years”.  Road is rotting away – streets are becoming bare, people are looting and damaging property and everyone’s morals have been replaced by quick ﬁx vices. Aware of their purgatory, they wait for death, sometimes quite literally.

There were some incredible performances in Road.   Most noteworthy are:

Mik Horvath, whom I believe I have praised for previous performances, played three roles.  Skinlad, a neo-nazi skinhead; DJ Bisto , basically a disgusting Jimmy Saville style DJ; and Brian, a single father trying to bed his shabby conquest.  The person I saw the play with didn’t realise that they were all played by the same person until I told her.  Each performance was distinct, each character well crafted, and the performances stunningly good.

Tina Hampton as Valerie, the wife of an alcoholic abusive absent husband.  Having been in this situation personally, I can attest that this was upsettingly well performed.

Lisa Benson as Helen, a broken alcoholic hippy.  Lisa played Helen thoroughly wasted throughout the entire play and never once got it wrong or broke that character’s addled state.  Drunk is a very hard role to speak or to move, but Lisa played both to perfection.  All of the drunk performances in the play were brilliantly realised, but Lisa’s was exceptional because she played it perfectly for two and a half hours.  Together with Andrew Barlow, as the young soldier she tried to seduce, she created a horrifying but beautifully acted scene.  Every physical movement was recognisably realistic.

There was really good staging and use of space involved in this performance.  The Players raised their game on staging, which is often inventive anyway.  All set shifts were very well done, the adaptation of the space to use various internal settings was clever, and well actualised, and the use of the walkway above the space as a balcony was really pleasing.

The play ends with a very deliberate indictment of 80s Tory Britain, with real scenes on news reels, raising the question of who are the real monsters, the real “scum” – the people we sweep under the rug, or the ones who do the sweeping?

This is a brutal but also beautiful play.  It goes everywhere you do not want to go, and shows you things you needed to see.  I find that Belper Players are at their best when they get serious.  Their upsetting plays are always much more impressive than their fun ones.  This one is uncomfortable and upsetting, and they were brilliant at it.

Because the play contains very strong language and adult themes, it is unsuitable for those aged under 16.