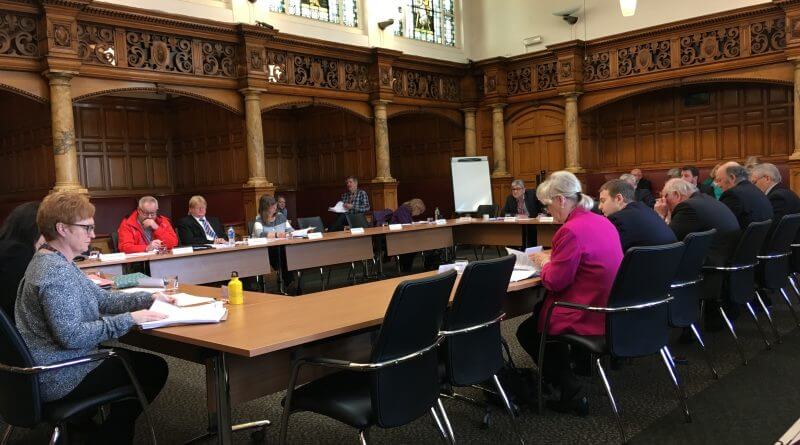 Allegations of “political football” and “grandstanding” were made as county councillors debated the transparency and legality of a consultation on cutbacks to the early help service.

Last month, Derbyshire County Council’s ruling Conservatives voted through a sweeping review of the service, which provides assistance to many of the area’s most vulnerable children, and their families.
This includes a careers advice service, community youth groups and ensuring that less-serious child abuse cases do not escalate.

As part of the review, the early help service would have its budget cut from £12.9 million to £4.5 million by 2020.
Meanwhile, a transition team would be set up for three years to help schools roll out their own early help system.
The opposition political groups, Labour and the Liberal Democrats, called in the review for further scrutiny.
They claimed that there was a “complete lack of transparency” during the consultation, which they also alleged did not “meet the legal requirements”.

This was largely due to the lack of responses to an online form – fewer than 500 – and no formal consultation with parish councils.  During the scrutiny  on 4th March to discuss these allegations, councillors stressed that although the main grievances focused on the pros and cons of the consultation, a substantial amount of time was dedicated to “political posturing”. The cross-party committee chose to turn down the call-in allegations – meaning it will not be brought back for a full review or extra consultation.

Cllr Paul Smith, Labour, said that the consultation was “predetermined”. He said: “I believe that no full, open and frank consultation took place. There was a very limited response to the consultation, the list of youth clubs affected came out at the 11th hour, nobody knew about that impact. It is inaccurate to say that this is not a front-facing service, and as such does not require a consultation. The careers service deals with thousands of clients per year – none of which were consulted and very few schools were contacted. If this is not a front-facing service then you could say that our home help service isn’t either.”

Cllr Tony Kemp asked Cllr Paul Smith to explain the ways in which the consultation failed to meet legal standards.
However, the authority’s legal services director, Janie Berry, said that this question was “slightly unfair” because Cllr Smith is “not a trained barrister, and can only give his opinion of what the legal requirements are”.

Cllr Irene Ratcliffe, Labour, said: “I am very concerned about the impact this could have on our youth services. We need to set our young people up with the skills they need to get into work, and we are pulling the rug on this process.”

Cllr Sue Burfoot, Lib Dem, said: “Every service that the county council provides is crucial. Of those, our early help service has got to be one of the most important that we provide. I think that the consultation was flawed.  Much of the detail in these reports is discussed in private and only becomes public in a big stack of papers. To pick out the important parts of some of these papers, well you’d have to be a lawyer, and I’m not a lawyer.”

Cllr Beth Atkins, Lib Dem, said: “A lot of what I have to say comes from personal experience – battered and bruised from working with teenagers. We need to help our young people and help keep them out of trouble.  So what if we have another pothole as a result, tough. We need to keep these young people safe, and turn them into wage-earners.”

Cllr Alex Dale, Conservative, the cabinet member for young people, defended the consultation and called the call in “political football by the two opposition parties”.  He said: “I welcome scrutiny and debate, but this case is weak. There are no grounds for this call in, which is based on misrepresentation, exaggeration and misinterpreted facts. This, to me, seems to be an excuse to grandstand and make political points.  The process of this consultation has been very extensive and took place for a year, and the feedback allowed us to shape our proposals.  We have met regularly with the trade unions and letters were sent to MPs, multi-agency teams, press releases were sent out and social media was used, and we held several workshops at schools.  I regularly visit schools and I always ask for their views on early help. We know that not everyone buys into our early help service, 17 out of the 45 secondary schools use our careers service offer.  There is no legal requirement to consult with parish councils, but it is part our duties as local representatives to update our parish council on what is going on, and some parish councils did respond to the consultation, so clearly the word got out.  And on the idea that there is not time to read the papers, you are here to serve your residents, and you are paid £10,000 per annum, it is your job to read these papers. This excuse simply doesn’t wash with me.  You’ve chosen not to engage with the process over the past year and have now stepped in only at the end.  We are not taking a leap of faith here, a number of other authorities have similar models to the one we are proposing, such as in Lincolnshire and Derby.” He said that many forms of consultation had been carried out, stretching beyond the online survey, including “less formal” processes.

Cllr Dale said that information was sent to youth groups by social workers and several young people filled out responses as a result.

Cllr Nigel Barker said that it seemed as if much of the consultation was with upper management and leadership, purely with the hope that the information would “be fed down the food-chain”.

Meanwhile, Cllr Jim Coyle said that consultation should be sought out, not left for people to come and seek it.