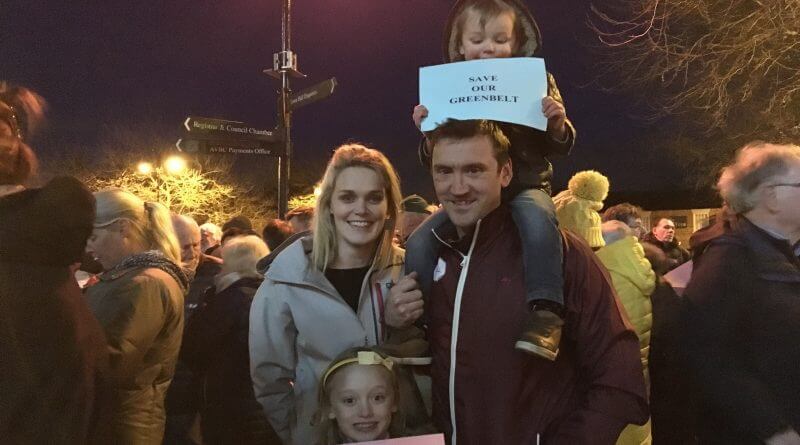 Controversial plans allowing thousands of houses to be be built on vast swathes of green belt land in Amber Valley have been approved – by the narrowest of margins.

But residents fear that once the protected land is deleted, it will be lost forever, and that it could lead to the borough’s towns and villages, including Belper, Heanor and Ripley, merging into one.

Leading Conservative councillors said that without forging ahead with the Local Plan – a blueprint for future development – predatory developers could lead a “free for all” and empty “a cauldron of chaos” on the borough.

During a meeting on Monday, 4th March 2019, borough councillors, joined by around 70 residents  – both in the main chamber, downstairs listening via a tannoy system and outside in the bracing cold – debated for more than two and a half hours.  They had to decide whether to delete 14 chunks of land from the protected green belt to free up space for 2,010 extra houses to be built by 2028.

On the night, two Conservative councillors, Cllr Ron Ashton (Ripley and Marehay) and Cllr Paul Moss (Ripley) broke from party lines to vote against the deletions.  Meanwhile, another Conservative member, Cllr Steven Evanson (Duffield) abstained from the vote. The three Tory members mentioned above are among the 15 councillors (10 Conservative, five Labour), up for re-election in May. One Labour member, Cllr Teresa Curran (Heanor), was absent from the meeting.

All in all, this brought the final tally of votes to 22 for, 21 against and one abstention – which saw the green belt deletions approved.

Had the vote been a deadlock, Mayor Angela Ward (Conservative), would have had the casting vote.

Speaking ahead of the meeting, and among the residents braving the cold, was the Carter family, from Belper. Mum Elizabeth and dad Sam had brought along their children, Ava, aged seven, and Harry, aged three, so that they might remember it one day as an important event in the borough’s history. Elizabeth said: “Schools are already struggling, and with more houses on the way, their catchments are going to be huge.  There is not much talk about improving infrastructure. We moved to Belper because of the grassland and countryside, but more and more of it is disappearing.”

Paul Andrews, from Belper, said: “We should not be building on any green fields, when we have plenty of brownfield sites just sitting there for decades, without any consideration.”

Colin Hopkins, also from Belper, said: “There have been so many more houses built just in the past 20-30 years. Once this green belt land is deleted and built on, it is gone.”

Former Amber Valley Borough Council leader, Alan Cox (Conservative) spoke during the meeting as a member of the public. He said: “(If this is approved) Belper would be two fields from Heage, it is only a matter of time before Belper and Heage become one. This is just the thin end of the wedge.”

One member of the public, from Duffield, said “this is a flawed report, do not be a flawed council” while another resident said that the plans would further extend the “urban sprawl” and that Belper and Ripley could end up merging, along with Loscoe and Codnor.

Leader of the authority, Cllr Kevin Buttery (Kilburn, Denby and Holbrook), says the council has a responsibility to supply houses for the borough.  He said: “People need housing, our children and grandchildren need housing, as the population grows, it is our responsibility to meet that.  I will not have this decision taken away from us. And without a Local Plan this is what will happen and housing will be built where we prefer them not to be.  As councillors we have to be flexible and adaptable and face reality.”  He reiterated that he would also be willing to make unpopular but important decisions.

Cllr Paul Hillier (Belper), cabinet member for housing and public health, said: “It is the unpopular thing to do but the responsible choice. The alternative, rejecting this report, is to empty a cauldron of chaos on the borough. We would go back to the drawing board. The whole thing is a catastrophe.”

Labour councillor Paul Smith (Ironville and Riddings), said that the whole debate took him back to his youth, taking shortcuts through open fields to get to school or to play with friends.  He said: “I don’t believe this is in the interest of the community, I think it is in the interest of the developer.  We are in danger of having one mass and you don’t know what community you are in anymore.  We complain that young people are in their bedrooms too much, but we are restricting them (by building on green belt land).”

Labour opposition leader Cllr Chris Emmas-Williams (Codnor and Waingroves) said: “All the sites should be rejected as exceptional circumstances have not been demonstrated one iota.”  He said that a proposed 10-pitch traveller site in Alfreton Road, Codnor, “sticks out like a sore thumb” and does not meet policy requiring green belt development to maintain a “defensible boundary”.

Cllr Tony Holmes (Lab, Ripley) said: “We should be building near Derby, because it is their housing need which is giving us housing headaches. We should be building in places like Allestree.”  He bemoaned the fact that there are more than 500 homes set for Ripley in next five years on proposed green belt sites.

Fellow Ripley councillor, Conservative Cllr Ron Ashton, said: “It is important to have a Local Plan, and we have little power to stop developers building on land without it.” However, he said the proposals represented “over-development of Ripley”.

Cllr Ashton continued: “I prefer that we build on brownfield sites, but there are not enough brownfield sites. I was elected to support residents in Marehay and Ripley, and I will be supporting them tonight.”

Fellow Conservative, Cllr Paul Moss, said: “I live in Marehay, and my view is and always has been that I oppose building in the green belt. I said that I would oppose inappropriate development, this has not changed.  With a heavy heart, this will be the first time in four years I will not be supporting my group tonight.”

Cllr Gareth Gee (Conservative, Crich) said: “We have a housing shortage in this country and a housing need in Amber Valley. We cannot negate ourselves from doing something to meet that need. We need houses for our children and grandchildren.”

Cllr Jane Orton (Conservative, South West Parishes), the cabinet member for community safety said: “I want to dispel the myth that there has not been any building in the west of the borough.  There is due to be 2,000 houses built there. The west side of the borough has had more than its fair share. The number of constituents in my ward would be double the amount under any one councillor.”

Cllr David Taylor (Conservative, Alport), said: “Developers want this to fail so that it is a free-for-all across the borough. We have to have somewhere for future generations to live.”

Cllr Marlene Bennett (Labour, Alfreton) says: “In the years to come, your children and grandchildren are going to say to all of you ‘mummy, daddy, granddad, what’s a green field?’ I am going to vote against this today so that they will know and can go and play in those green fields.”

Here are the 14 extra sites, which will now be deleted from the green belt, followed by the number of houses that could be built on them: