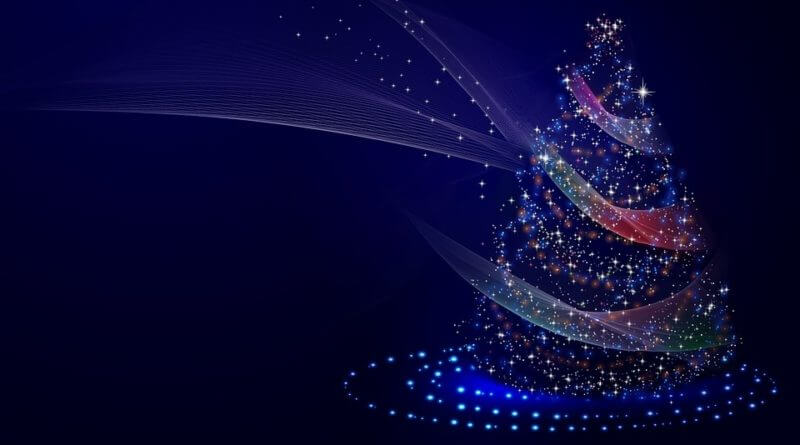 Belper is a special place, which can be defined by its community spirit.  The capacity of our people to come together and create incredible events, or to help those in need, is well known, but this Christmas Belper has excelled itself.  We’d like to tell you about some of the things that Belper people have been doing to help others this Christmas.  We’re sure that we haven’t discovered everything that people have done, so please do add anything we have missed in comments or with photos on our Facebook page.  May Belper bless everyone in it! 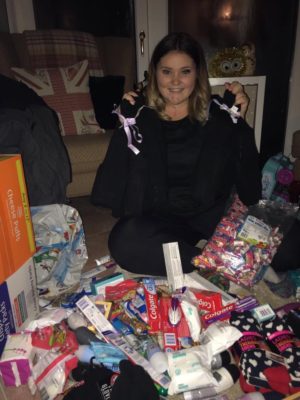 Harriet Kelly is organising Derby Christmas Socks, collecting donations and delivering them to the homeless.  Harriet told us, ” I just thought, I’m 23, and nearly all my wages were going on Christmas presents for my family. And to be honest, none of my family NEED anything, and a lot of other people do. So this is where I chose to spend my money this year!”

Harriet has recived a lot of donations, but hasn’t recieved enough to achieve her aims yet.

You can help Harriet in her solo project by donating any items you can spare for the homeless this Christmas. You can contact Harriet via email  if you can help: Harriet-kelly1122@hotmail.co.uk

Items you can give:
toothpaste, toothbrush, gloves, roll on deodorant, sanitary items, comb/brush, hand gel, chocolate/sweets, hand wipes, packet food items, toilet paper/tissues, underwear and anything else you may think of!

Harriet has spent about £200 of her own money on similar items, and is hoping to also get some Greggs £5 vouchers for those most in need.

Chatterbox is a social group for adults with learning difficulties.  They have been making Christmas stars, as well as hats and scarves for those in need.

They gave scarves and hats to those most in need across Derby and Derbyshire, and left others tied to public spots with labels telling people who found them where they had come from and that they were there to be taken.  More scarves and hats were taken to the Padley Group, which supports the local homeless.

The sewn fabric stars were left to bring joy to anyone who found them, and many Belper residents have reported finding them and hanging them on their Christmas trees.

Deborah Parker said of the morning giving out and tying up scarves, “It was a very thought provoking morning, imagining what it would be like to be outside all day and night in this cold weather and realising how lucky we are not to be in this situation.”
And of all those who helped, “A big big thank you to all our members, their family, volunteers, carers & support workers for all your effort with this project, you are truly amazing!”

Olive, the Moroccan Restaurant on the Market Place, was intending to cook Christmas dinner for patients of a drug unit, but was let down.  With no diners to care for, Olive has arranged, through a regular diner, to supply dinners for the homeless, which will be distributed through churches in Derby. 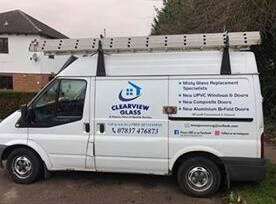 Tom Spencer, owner of Clearview Glass, has been collecting massive quantities of donations for the homeless, with Street Safe Derby as the beneficiary of his charitable deeds.

Tom said,”Initially I came across ‘Street Safe Derby’ on Facebook in the Summer. As you can imagine it was a busy time for my window business Clearview Glass but wanted to use my business page on Facebook to attract help and interest for the homeless as it has over 1400 followers. I put an advert out in mid December and the response has been incredible. Two full van loads from over a dozen of my customers.”

Tom also had donations of 125 square feet of abandoned property from a self storage unit, which included clothes, TVs, furniture and more.  These are all going to Street Safe, as the items which are not appropriate for the homeless can be sold in the Street Safe charity shop to raise funds for food, clothing, and toiletries.  Furniture can go to Ohana, who offer shelter for the homeless.
Tom’s partner, Claire, is a teacher so she intends to incorporate homelessness into a school lesson.  Tom will provide bread and sandwich items for them to make to take to the charity and Tom intends to personally  distribute the food alongside the Street Safe volunteers.

Tom told Nailed, “The response has been so heart warming and there’s so many people who have helped.” 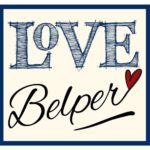 Love Belper, the collective tourism and promotion grouping of independent traders in Belper, have organised a Christmas Jumper Day, raising funds for Special Friends, a Belper based play and support group for children with “additional needs”, which helps areas surrounding Belper as well.

Belper Christmas Shoebox Appeal has arranged for members of the community to fill shoeboxes with gifts, these shoeboxes were then wrapped and delivered to the local elderly who are living alone or in care homes.  One of the care homes where community filled boxes were delivered was Spencer Grove, where a 98 year old resident, Muriel, asked the Shoebox volunteer to thank everyone involved. Belper Community Cottage Project also recieved some of the hundreds of boxes donated by the community and distributed by the Shoebox organisers.

Although guidelines were issued for what might be included in a box, Belper people added their own personal touches with home baking, home brewed alcohol, and Christmas Cakes. 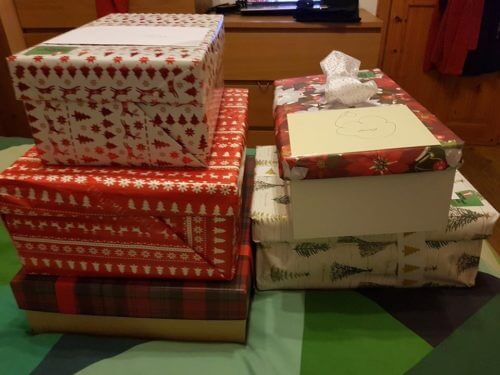 Aldi arranged to give away all of their unsold fresh produce to local charities helping those in need.

Morrisons and B&M both held toy collecting drives, where shoppers could buy an extra gift and leave it in a collection in the store, to be distributed to children who won’t get many presents.

Sharing Not Wasting is a year round group which aims to share food which would otherwise go to waste.  They collect food which will be disposed of by retailers and pass it on to the communnity on a “pay what you can” basis.

Sharing Not Wasting are continuing to provide food every Friday from the Early Years Centre/ Belper Children’s Centre on Alder Road.

This helps some who struggle to afford a Christmas dinner to get some of it for the price they can afford.

St. Peter’s is providing a Christmas dinner for those who don’t want to be alone on Christmas Day.  They have also been carol singing at Osmaston Grange and Spencer Grove care homes. 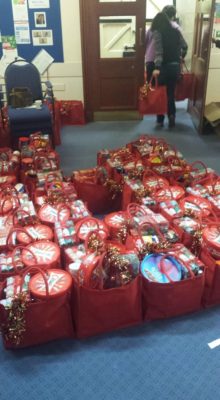 Hope for Belper, Derwent Valley on Demand, and The Lion Hotel held “Puddings, Pies…and Pants!”  This was a charity gig of local performers where the entry price was a donation of warm clothing, toilettries, or food.  This was all distributed by Hope for Belper, who are constantly doing good work to help the poor and needy of Belper, including running the foodbank.

You can still help those in need to be fed this Christmas by donating to Belper’s Basic Idea foodbank.

Hope for Belper offers these guidelines. 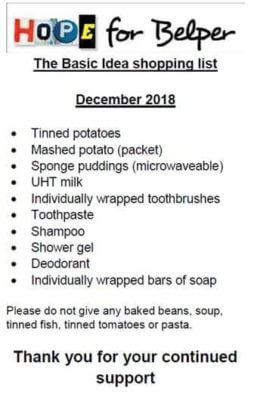 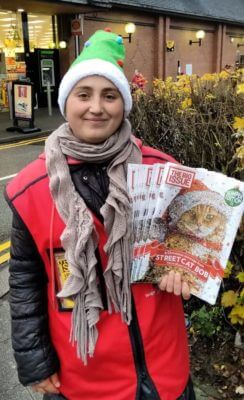 Lisa Williams appealed on Facebook for a coat for Simona, our Big Issue Seller, who is pregnant and working outside in the freezing weather.  Although there were eventually several kind offers, after some negative comments, Lisa had bought a coat for Simona herself.

We have previously told Simona’s story on Nailed.  It is her 24th Birthday tomorrow (Saturday) – please read her story and perhaps you will be inspired to make her Christmastime birthday a little more special.

Update – Lisa got back to us to say: 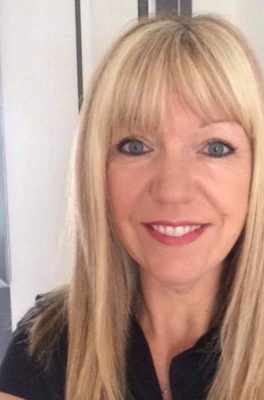 “I have bought the Big Issue Magazine since I made an advert in London for lendwithcare (connected to Big Issue), which was featured on the National Geographic Channel. Like many people of Belper, I get a big hug off Simona every time I see her. Two weeks ago I saw through her smile and she told me that her husband had lost his job and she was pregnant, and the baby was making her feel sick, but she still stands there 8 hours a day in the ice, wind, and rain so that she can provide for her family. I asked if she was warm, and she said her coat was thin and not warm, so I rushed home but couldn’t find anything, so I put out an appeal to the Belper people. After a few negative comments, the support I got was amazing. I popped into Red Cross where all the coats were on sale and took her one up with the receipt in case it didn’t fit. I bought her a coat from Red Cross as I hadn’t seen all the comments until I got home and thanked the kind people for their generosity. I’ve had maternity clothes left at my house, and when I visited her to give her a birthday card, the people of Belper had left her loads of clothes.”

Lisa was concerned by some negative comments she recieved, and, as she is regularly involved in charity work for a variety of causes, wants “to get the message out that we all need help; we are all human.”