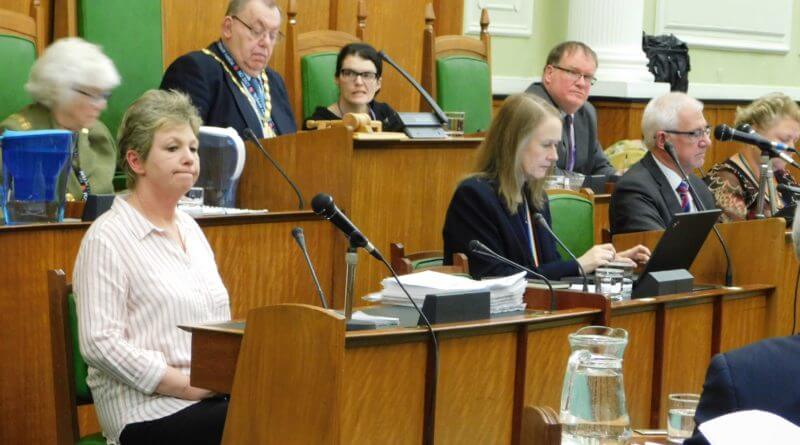 School catering staff have warned that children could die and staff would have to cut corners and work in their own time if cuts are made to the service.

During an, at times, heated Derbyshire County Council debate, school catering supervisors from two schools gave passionate statements to the elected members. They were voicing concerns about Derbyshire County Council’s plans to reduce contractual hours for nearly 1,000 school catering supervisors – sometimes referred to as “dinner ladies” by up to eight per cent. This would result in staff currently working 37 hours a week earning around £97 less each month; and those working 30 hours would earn almost £80 less.
Some members of staff will not have their hours reduced.

Marie Blackler, catering supervisor at Field House Infants in Ilkeston, during the debate, invited the cabinet member for young people, Cllr Alex Dale to work a shift in her kitchen before any cuts are made. He has accepted this offer. Ms Blackler said that if he does carry out this shift, he will realise that the service is already under immense pressure and must not be cut further.

She said: “As a ‘dinner lady’ in a Derbyshire School, I am very concerned that this proposal will significantly reduce either the quantity of meals produced or the quality of meals that Derbyshire children will receive.”

Meanwhile, Julia Coxson, a catering supervisor at Hulland Primary School, asked what risk assessments had been carried out about the proposed cutbacks, to ensure it would not have a negative impact on children.

Cllr Dale said that the authority has assessed the types of equipment each school has, the size of the kitchens, the length of lunchtimes, special diets, and the number of staff.

Ms Coxson said that Cllr Dale “had missed the point”. She said that with reduced hours, staff may miss details such as allergies and dietary requirements of children in the school, putting them “at risk”.
“Children could die,” she said, adding, “I don’t know how we can do this on reduced hours without cutting corners or working in our own time.”

Cllr Dale said that he would “hope” that staff would still be able to maintain the quality of the meals offered and that the investment the council has put in to improve processes would help ensure this. This includes, he says, more than £1 million on items such as dishwashers and combination ovens. He said that he was eager to find out if this was having its intended effect during his shift in the kitchen.

Cllr Dale said: “Some staff will not see any reduction in their hours. Our proposal is to reduce hours by up to eight per cent.
“Only a third of employees will have a seven to eight per cent reduction, a further third will have a reduction of five per cent or less and for some there will be no change at all. Nobody wants to reduce the quality of school meals – we rate our school meals very highly – and this council is absolutely committed to the catering service. But it has to be sustainable for the future, and to do this we have cut management costs and raised school meal prices – without doing so, the proposals would be much worse.”

Union representatives from GMB say that catering staff had been “gagged” by the council and advised not to speak to the media.
The council has denied this allegation and today Cllr Dale has given the union “verbal assurance” that staff would not face repercussions from speaking publicly about the situation.

GMB, along with fellow union UNISON has called the plans “worrying” and “another kick in the teeth” for a workforce which is largely female and are among the lowest paid out of the thousands employed by the county council.

The council also says that hours will not be reduced at schools whose meals reduce between April 2019 and April 2020, and that without any cutbacks, the service would make a loss.

In October, it was revealed that school catering staff who do not accept a reduced hours contract will have their employment terminated by February 18, 2019. “Offers of re-engagement” were served to all staff who had not yet accepted the new contracts on November 19.