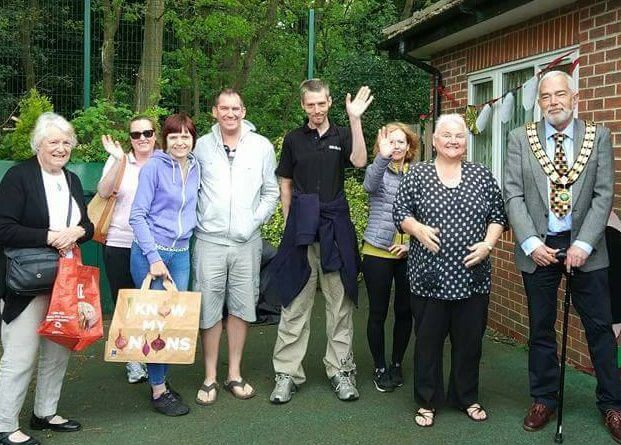 ‘sharing not wasting’ is a new Belper initiative which aims to redistribute food that would otherwise be wasted to people who can use it.

The group works with an organisation called FareShare, who intercept and redistribute food that would otherwise be wasted from various organisations and retailers. All people working at ‘snw’ are volunteers and, after months of planning and preparation, the launch went ahead on Friday, 11th May.

Belper Town Council have been supportive of the scheme and have made a grant to cover the cost of the first six months of deliveries. Councillor Tim Sutton, the new town mayor, showed further support by coming along to open the scheme and to be one of the first people to use it. It is hoped that, going forward, the scheme will be self-funding, and there is a donations box at ‘snw’ for people who are able to contribute.

The team were nervous as well as excited for the launch as it felt like a defining moment on a long journey. Final adjustments were made to the displays, bunting was put up along with the opening ribbon and, on Friday, 11th May, ‘sharing not wasting’ was launched with the opening ribbon being cut by Belper Town Mayor, Tim Sutton.

The first ‘customer’, Robert, had been discharged from hospital earlier that day and told Tim that the food would make a real difference to him.

The chair of ‘sharing not wasting’, Sue MacFarlane, said: “I am delighted to be part of this project, and feel so lucky to be working with such a great team of volunteers.  Food waste, and the negative impact it has on our environment, is something that I feel very strongly about. To be able to offer people in Belper the opportunity to be part of the solution to this problem is absolutely great.

Over the couple of hours that that the pop-up shop was ‘open’, 71 people went through the door and around 275kgs of food was saved from landfill. There was a bit of a queue at the beginning and, after the first half an hour, there was a steady trickle of people until closing at 4pm.

The donations made are vital to ensure that the scheme can continue. Volunteers were clearing and sorting as the time went along and were amazed that, given the amount of food moved, there was almost no actual ‘rubbish’ to dispose of. Some of the plastic bags were taken for recycling, and people took some of the card/wooden boxes to use or recycle. So, as well as reducing food waste, the team were ensuring that none of the packaging went to landfill.

Three major studies published in 2013 and 2016 estimated annual food waste arising within UK households, hospitality and food service, food manufacture, retail and wholesale sectors at around 10 million tonnes, 60% of which could have been avoided. This has a value of over £17 billion a year, and is associated with around 20 million tonnes of greenhouse gas (GHG) emissions. The ‘sharing not wasting’ project is looking to be a small part of the solution to this issue.

‘sharing not wasting’ operates from Belper Early Years Fun Centre on Alder Road every Friday between 2pm and 4pm. People are asked to bring a bag, although bags are available if needed. So that as many people as possible can participate in the scheme, the team asks that everyone takes just one bag of food and considers making a donation, however small, if they are able.