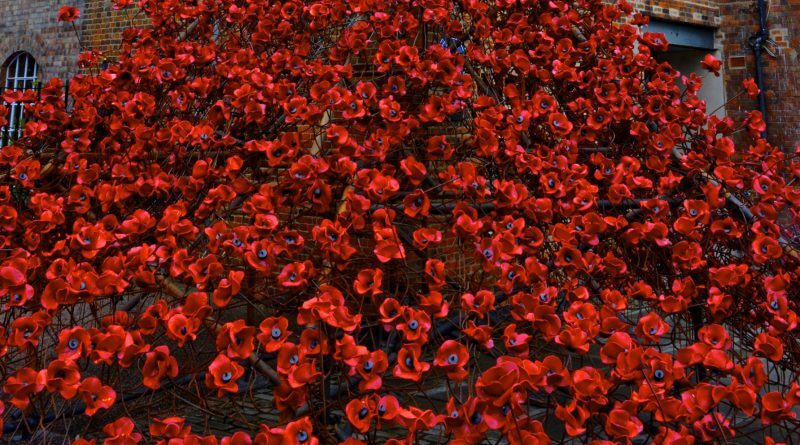 Travelling into Derby this morning for the unveiling of the installation I reflected upon the fact that I was lucky enough to have been born after both World Wars had wreaked their havoc on my parents and grandparents generations.

Nevertheless, reminders of these conflicts are never far away either in the form of memorials up and down the country or in the shape of this mini-installation hosted by The Silk Mill in Derby which is a condensed version from The Tower of London blockbuster exhibition in 2014.

Weeping Window is from the installation ‘Blood Swept Lands and Seas of Red – poppies and original concept by artist Paul Cummins and installation designed by Tom Piper – by Paul Cummins Ceramics Limited in conjunction with Historic Royal Palaces.

If this scaled down version can convey only a fraction of the impact of the original then I can’t imagine how breath-taking that sight must have been. Just imagine The Tower of London and its surrounding grass covered moat bedecked with over 888,246 ceramic poppies.

Presently in Derby, there are 5,000 assembled here, all cascading down the tower at the Silk Mill surrounded at ground level by randomly scattered poppies, erupting through the paving, each one of them representing an individual soldier who sacrificed his life in the service of his country – young men with a lust for adventure and who selflessly volunteered thinking it would all be over by Christmas of the same year.

The exhibition by 14-18 NOW, a UK’s arts programme for the First World War centenary, gives people across the UK the chance to experience the impact of the ceramic poppy sculpture in a range of places of particular First World War resonance.

Paul Cummins, the artist, describes himself as a ceramic artist working in mixed media but effectively he has a ‘foot in both camps’ of both craft and art.

This huge undertaking has thrust him, somewhat reluctantly, into the glare of the world’s media. His studio, essentially a 30,000 square foot warehouse on Pride Park, is where a large proportion of the poppies were made over the course of several months in 2012/13 with the help of an army of art students from Derby University.

Thanks to the generosity of two philanthropic organisations, 5,000 of the original poppies have been gifted to the nation enabling us to view them here on their brief return to the city.

Paul commented: “For me, the souls of the soldiers who died are here represented by these poppies. Just as their lives were transient so is my work.”

Paul’s collaborator in the project is Tom Piper, designer. Tom told me that he feels the Silk Mill is a particularly appropriate back-drop for the poppies, the bright red petals contrasting with the warm terracotta hues of the engineering bricks, instead of the more traditional gallery space in which most people are accustomed to viewing art.

During the First World War, Derby Silk Mill was  divided into two businesses one grinding corn and the other making medical supplies, both integral to the British war effort and scarce by 1916.

Tom hopes that by viewing this on an industrial building it will prompt ordinary working families to identify with their Edwardian counterparts and particularly wants the poppies to “set seeds” in the minds of the younger generation.

Looking at the exhibition, the scale of the carnage is laid bare, a poignant reminder of the impact that the so-called Great War had on ordinary people’s lives, the individual’s sacrifice for the greater good. The difference today, thankfully is that modern warfare acknowledges the impact that being placed in conflict zones has on a person’s physical and mental health and P.T.S.D. is taken seriously.

It is to be hoped that visitors to this exhibition will leave with an indelible impression of the debt we owe to previous generations and why it’s so important that we don’t take our freedom for granted and most importantly, we should never forget.

Poppies: Weeping Window at The Silk Mill will run from Friday 9 June to Sunday 23 July, and will coincide with Derby City Council’s ‘Derby Remembers’ event which commemorates the First World War Centenary.