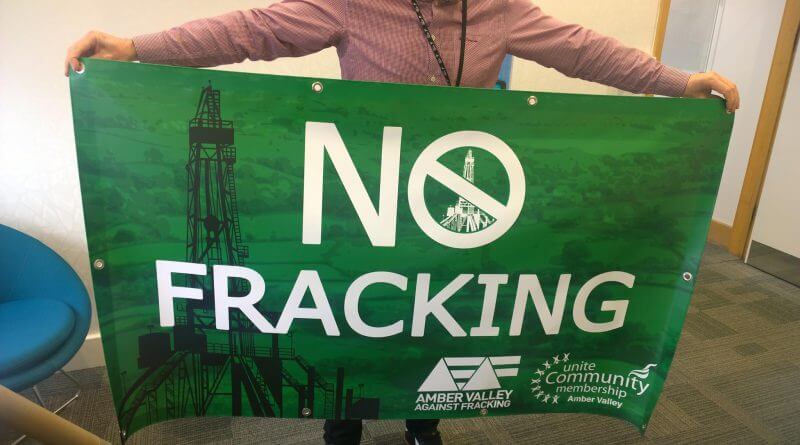 I first started Amber Valley Against Fracking (AVAF) back in September 2015, after hearing on a local radio morning show that Amber Valley area had been licensed for fracking.

Having always being environmentally concerned and studying Sustainability and Business Ethics at Nottingham Trent University as part of my degree, I decided to take action. Myself and a few friends started a core group shortly after this devastating news.

Around that time we attended a discussion that was being hosted by Peter Robinson of Derby Climate coalition. One of the topics on the agenda was the threat of fracking in Derbyshire. Peter spoke to me after the meeting and we decided to arrange a public meeting in Alfreton. Peter also put is in touch with Unite the Union, who have been amazing in their financial support; helping us print leaflets, t-shirts and banners for the cause.

The first local meeting had over 50 people attend. Following an informative presentation from David Burley, of the long established and successful Frack Free South Yorkshire, we formed a core group of activists who were ready to say no to fracking.

INEOS (the company who pose the most danger to the East Midlands and South Yorkshire) had a meeting in Chesterfield in May 2016, which AVAF attended and protested. Since then we have been to various INEOS presentations in Worksop, Shirebrook and Eckington to protest their vile methods of fossil fuel extraction. Earlier this year AVAF proudly attended the Sherwood Forest protest, where we joined forces with Frack Free groups from across the East Midlands and across the country.

They were looking to conduct seismic testing on Cotes Park. Seismic testing is the precursor to fracking taking place, as they use this testing to establish how much shale is in that area and if it is worth opening an exploratory well. We campaigned in the local area with leaflets to make people aware of what was happening and to ensure people would not allow FGP (working for INEOS) to install seismic monitors known as “geophones” on their property.

What we plan next is another large leaflet campaign (funded by Unite) in the Amber Valley area. If you would like to help us do this, particularly in Leabrooks/Somercotes, please email here.

We will be having a stall on the May Day parade in Chesterfield on 1st May and also at the Belper Goes Green festival on the 3rd and 4th June. There is a fundraising event at the Queen’s Head in Belper with music from Winter Wilson. We invite all and many to attend this event.

We also have a Facebook page and an online petition. Please could you sign and share the petition as much as possible to help our cause!

Most importantly, speak to your local councillors and MP about what is happening! Tell the Amber Valley MP Mr Nigel Mills you are concerned about fracking and write to him at nigel.mills.mp@parliament.uk

2 thoughts on “Fracking Month: “How I Started Amber Valley Against Fracking””