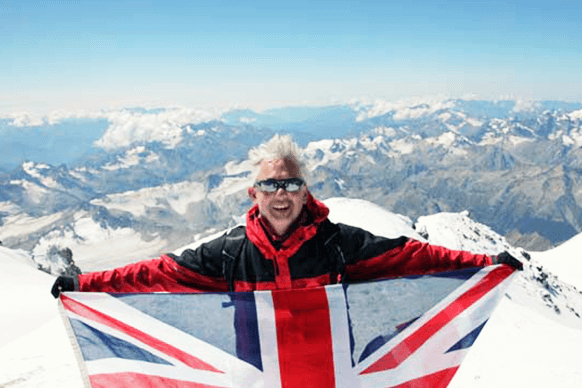 Nigel Vardy joins familiar names such Ben Fogle and Sean Conway to support the OS GetOutside campaign. All of the champions, shortlisted from members of the British Public, will spend the year helping and inspiring people to get outside and do more exercise.

Vardy has been a keen hillwalker since his childhood after a family trip to the Peak District. Later, as a teenager, he took part in a Raleigh International expedition to Chile. He then began mountaineering and has since travelled across the globe climbing and walking.

In 1999 Vardy suffered severe frostbite during a storm that hit whilst scaling the slopes of Mt. McKinley, Alaska. Having lost toes, parts of his fingers and suffered facial scarring Vardy had to learn how to climb again. Since the accident he has been sharing his experiences with businesses and schools around the world and inspiring people with his journey.

Ordnance Survey launched its campaign two years ago after research highlighted that the British public were becoming increasingly less active.

Sports England research suggests that one in two women and a third of all men in England are damaging their health through a lack of physical activity. Particularly alarming is their Active Lives Survey, which showed that 11.3 million people do less than 30 minutes activity a week.

Vardy spoke with Nailed briefly about being selected as an OS champion, his favourite climbs and how he first got into mountaineering.

Firstly, congratulations on being chosen as one of the #getoutside champions, when did you hear that you had won?

NV: I received an e-mail mid December 2016 confirming my position, which came as quite a surprise.  I’d applied months before and not heard a thing, but felt very happy and proud to have been chosen.  I’ve never been a ‘look at me’ type, so to be in the same group as Ben Fogle and Sean Conway is incredible.

How did you get into climbing and what advice would you give to those thinking of giving it a go?

NV: My first experience of climbing was at Belper High School in the early 1980’s. Halcyon days where teachers took their pupils climbing, sailing, pot holing and the like. It’s such a shame that much of this has stopped. As for advice, go to an indoor wall at first and get some lessons. Build from there and if you wish to move outdoors, the summer is coming!

Belper and the surrounding area has some stunning scenery, can you recommend any good climbs in the area?

NV: They are simple to access, good to climb on and the views over Carsington water are extensive. They hold warm afternoon sun, so evening ascents are often bathed in crimson sunlight.

Finally, you have visited scores of destinations, could you pick a favourite climb?

NV: As for pure altitude mountaineering, Mt McKinley in Alaska or Ama Dablam in Nepal were tremendous places to climb (although I had accidents on both..!). As for rock, routes on Tryfan in Snowdonia or St Sunday Crag in the Lakes are exposed and challenging. Closer to home, I do like a scramble onto Kinder Scout, but only if the streams freeze and I can get my ice axes out!