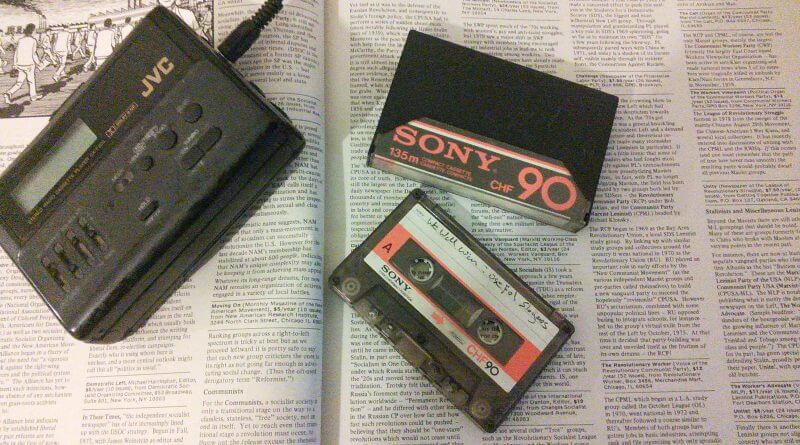 The Rebel Yell workshops starting at the Kings Head on the 19th of February inspired me to dig out an old cassette mix-tape that I had not listened to for a very long time. The cassette is entitled “We Will Win” and contains protest songs and tracks taped from various radio programmes (mostly John Peel) around 1983 – 1986. The tape begins with Venceremos by Working Week and ends with the angry howl of Test Department’s “Total State Machine”. The mix-tape reflects, in the tracks recorded at the time, a particular period that involved the Miners’ Strike, the rise and fall of the New Age Travellers and the return of mass unemployment. Many of the songs on the tape are directly political and contain an optimistic belief in the potential of collective struggle: the future contained possibilities, as yet unrealized, but worth fighting for, and worth defending.

The cassette takes its title from the song Venceremos: “We Will Win”, a song that mourns the murder of the singer Victor Jara at the hands of General Pinochet’s Chilean government. Its refrain is optimistic: we will not forget, justice will prevail, tyranny will not endure..

Next up is a Billy Bragg, John Peel session, that includes “Between the Wars”.

“Between the Wars” still resonates today: In 2 minutes and 43 seconds Billy Bragg manages to describe the inherent decency at the core of democratic socialism. Here are some lines from the song:

Call up the craftsman, bring me the draughtsman, build me a path from cradle to grave and I’ll give my consent to any government that does not deny a man a living wage”

After Billy Bragg the tape segues into a Keith LeBlanc track: “Strike” by the Enemy Within. Recorded in support of the Miners’ Strike it uses a technique of speech cut-ups and beats.  In the mix-tape I seem to have used the segue to comment on (and subvert) Billy Bragg’s assertion that “sweet moderation” is the  “heart of this nation”.

The track that took me completely by surprise was the one that ends side A: Wah’s – “The Story of the Blues parts 1 and 2”.  Pete Wylie really can’t sing that well but the song itself has so much heart, ambition and pride within it that it carries you along. In Part 2, Pete Wylie’s offers a manifesto and a credo of hope to his audience, quoting both Jack Kerouac and Raoul Vaneigem. It reminded me of how important that was to me at the time, and how it, at least in part, shaped my own philosophy.

Before 1984/85 it was possible to articulate a utopian, altruistic future…But the defeat of the Miners’ Strike, the crushing of the New Age Travellers at the “Battle of the Beanfield” and the re – election of  Margaret  Thatcher’s Tory party with a landside 102 seat majority in 1987 put an end to that.

The Left has been playing catch up ever since, defending what it can of what remains. The hurt is best represented by the band Test Department who took the detritus of manufacturing industry and turned it into an angry and unfocused dissonance. Test Department’s “Total State Machine” is the track that ends the mix-tape at side B.

The cassette runs out at this point.. but time moves on, and by 1988 you could make a choice; you could either let the hatred, anger and disappointment mire you into the politics of  never – ending and bitter class-struggle, or you could regain the power of the collective through other means.

And at this point it is worth quoting the end of the “Story of the Blues Pt2” in full:

I remember something Sal Paradise said, he said: “the city intellectuals of the world are divorced from the full body blood-of-the-land and are just rootless fools.” So, listen, when the smile, the condescending pat-on-the-back comes and says “we’re sorry, but you are nothing, you’ve got nothing for us and we’ve got nothing for you”, you say “No” and say it loud “NO!”, and remember “people who talk about revolution and class-struggle without referring explicitly to everyday life, without understanding what is subversive about love, and what is positive in the refusal of constraint…such people have a corpse in their mouth..”