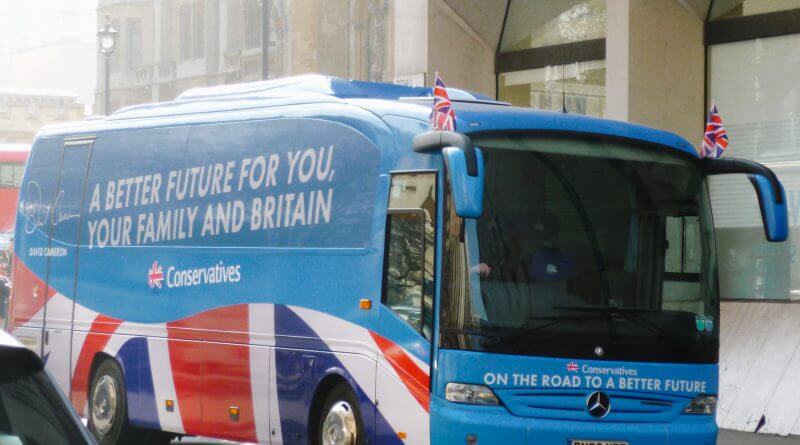 Channel 4 News recently (20th April) broke the story that the use of the “Battle Buses” in the general election in 2015, which saw the Conservatives take power with a small majority*, broke both election expenses rules and the law.

The Electoral Commission (responsible for regulating the electoral system) requested an extension to the time limit available to pursue criminal prosecutions about Conservative Party campaign spending at the end of April and announced a summit with the relevant police authorities, which occurred last week.  Following that summit 11 police authorities have so far announced to be planning investigations.

Bob Posner (Director of Party and Election Finance & Legal Counsel at the Electoral Commission) said, “The police and the CPS both have the power to apply to the Courts to extend the time limit on bringing criminal prosecutions for electoral offences to allow for full investigations to take place. We have requested that they consider doing this.”

One of the MPs under suspicion is Amber Valley’s MP Nigel Mills (previously in trouble for playing Candy Crush in a parliamentary meeting).  Derbyshire Constabulary confirmed to us to today that they have applied for an extension but now they must wait to find out if this extension is granted because they cannot investigate until they have it.

Nationally, the numbers in the Channel 4 News reports vary from 20 to 30 candidates under suspicion of exceeding their election budget and not declaring their use of the Battle Bus.  The Battle Bus was deployed with Conservative “activists” in 29 constituencies along the RoadTrip; 24 of these were marginal seats (not a sure bet) and 22 were won by the Conservative Party. 16 Police Forces cover all of the constituencies and 11 have now applied for an extension so that they can investigate with an aim to criminal prosecution if the Channel 4 News evidence is found to be accurate.

Typically a candidate is given a figure between £12,000 and £15,000 which they can spend during their 39 day campaign.  Nigel Mills limit was £14955.09, he declared £13881.62. He did not declare the bus, hotels, food or Battle Bus promotion and his estimated overspend is £1,076.53.  Failing to declare any spending is a criminal offence under the Representation of the People Act and carries a penalty of one year in jail or an unlimited fine.  This spending also includes all electoral agents, not just the candidate.

The Conservative Party claimed that the buses fell under national spending,  “Such campaigning would be part of the national return, not local return, as the Electoral Commission has said.”  But the Electoral Commission, which is the authority on the legality, actually said, “If activists were being bussed in to particularly campaign for a candidate, then according to the guidance that we provide, a candidate would have had to make a fair and honest assessment of this … and include that in their spending return.”  The money spent on the RoadTrip was not declared in national returns either, which the Conservative Party have blamed on an “administrative error”.

The Battle Bus was deployed to specific seats which the Conservative Party needed to win the election. Channel 4 News specifically used Nigel Mills as an example of how the campaigning was local, having acquired photographic evidence of Battle Bus activists handing out his campaign leaflets and campaigning for him personally, door to door, having been briefed on local issues.

The expenses in question are not just the £400 per day cost of the Battle Bus itself but also of all the expenses of the activists manning it, including hotel costs and promotion costs, which is estimated to bring the cost to approximately £2000 per day.

So what happens next?

Locally, if the Derbyshire Constabulary get the extension which they have requested, they will be able to investigate.  If they find evidence that Channel 4 News’ claims are true, they will present their evidence to the Crown Prosecution Service (CPS) who will decide if there is enough evidence to prosecute.  If there is, they will prosecute.  If Nigel Mills is found guilty of not declaring election spending in his returns then he faces jail or any level of fine which the court deems suitable.  He would also lose his Amber Valley seat.

Nationally, we have to wait to see which constituencies are granted an extension on the time limit (which expires in June 2016) and what the outcome of those investigations are.  Speculatively, only 6* need to be found guilty and lose their seats for the Conservative Government to lose its majority.  There is then the question of whether this was ever a legitimate government, as these seats would then be considered to have been won by fraudulent means.  We will have to see whether there is action following resolution of these investigations to question the legitimacy of this government and its actions so far, but there may simply be by-elections to determine the new majority.

*Parliamentary majority is determined in a variety of different ways.  Press variably reports them as having a 12 or 14 seat majority.  Parliament itself says that it has a “working majority” of 16, based on “Conservative MPs minus all other MPS” but their maths is wrong as this system returns a majority of 10 – all other MPs totaling 320 and the Conservatives totaling 330.  However, legally, they simply need more than half the seats, which is 326 out of 650.  If they lose 6 seats (330 down to 324), they have lost their majority by law.