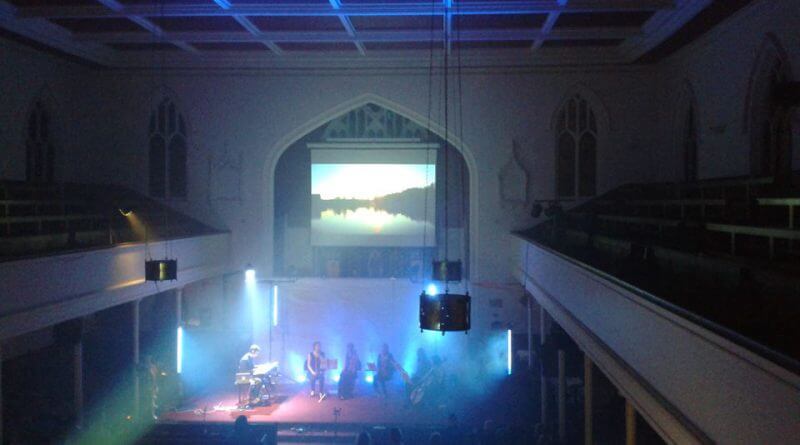 Let’s go back to August 2015 when I sat in Fresh Ground with composer James Oldrini and commissioned him to write a piece of music that, in his mind, reflected Belper.

“Daring,” was his response. That was followed by a reluctance that slowly turned into “Yes, I’ll do it.” The result stunned the audience at its premiere in St. Peter’s Church. James, along with his “Quartet plus one” of violins, violas and cello played THE BELPER SUITE with passion and precision. It reflected the history of the town (Industrial Revolution) and its pastoral feel. At its climax the bells of St. Peter’s Church rang out and for the first time they were heard LIVE in the church.

The applause and cheers that greeted THE BELPER SUITE reflected the enthusiasm of an audience who were enraptured by it. The Suite was supplemented by a terrific light show (Jamie Vella) and a film with images of Belper, supplied by James Reader, that was edited and projected by Louis Vella. It included a list of the fourteen Belper men who died on the first day of the Battle of the Somme, a particularly moving section.

A full supporting bill opened with CAPTIVE AUDIENCE COMMUNITY THEATRE. The senior group of children featured Keane’s “Somewhere Only We Know” and they were followed by singer / songwriter John Stamp who has had a near twenty year absence from performing. It didn’t show as his vocals revealed a powerful and confident voice.

‘The Derwent’ was written by myself three years ago for Discovery Days. At that time it was a soundscape; Celebrate Belper heard it performed as a piece for voice and cello. Sheila Kay Sly reprised her role as the ‘Voice of the River’ and cellist Hannah Barrs (‘Music of the River) wrote and played her vision of ‘The Derwent’.

Matt Turner, minus his group Fine Art Society, turned in an excellent set of self-composed songs and he was followed by local favourites Belper Musical Theatre. Strong applause greeted both performers.

Lucy Milford is building quite a reputation for her performances, and quite rightly to. The highlight for me was ‘Songbird’, written by Christine McVie and originally performed by Fleetwood Mac. During the summer Lucy will be performing at the Food Festival and the Belper Games. It will be worth your while to seek her out

The evening was hosted by Radio Derby presenter Andy Potter who set a wonderful tone for the event with his stories and interviews.

Celebrate Belper : The Concert was, to me, what the Belper Arts Festival is about. Local talent was given the opportunity to shine and grabbed it with both hands. Inclusivity not exclusivity was perfectly reflected in CELEBRATE BELPER : THE CONCERT.

Now just one question remains….. how do we top that next year? Please forward suggestions on the rear of £50 notes. Thank you.