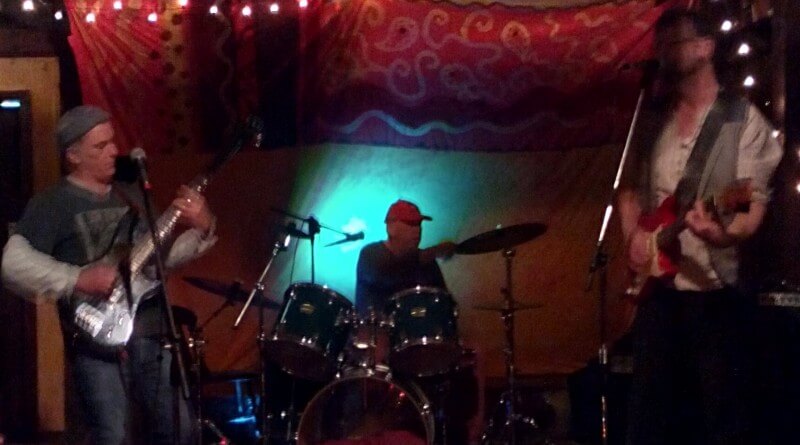 A revamped Moon Bullet deliver lo-fi sounds and big energy to the crowd of the Old King’s Head.

In the lavishly decorated top room of the Old King’s Head, local poet and MC Leo Swarvett opened up proceedings with some of his sassy and sexy rhymes. Once he finished there was a brief interlude before Moon Bullet took to the stage.

Moon Bullet, now a three piece, sees lead singer Julian Woodcock taking over duties on the bass. Speaking of which, for their first live performance since the shake-up, he seemed pretty solid on instrument. Lead guitarist Richard Battson took on more vocal duties this time around, but it was nice to see him still able to open up some serious riffs when required. Lyrically, you still get the complex, Dadaists thought splatterings of Julian and Richard that can range from anything between social satire and plain goofballery. Musically, the shared vocals and heavier leaning towards guitar sounds make the new set up feel a little grungier and lo-fi than the band used to be – no bad thing, particularly in a smaller venue like the Old King’s Head. That’s not to say the New Wave sounds are gone, far from it, the band still kept it creative and cool with slinky, funky 70’s style riffs and Ska beats. Trite as it may sound, Moon Bullet look like they are having fun again. The complex rhythms of the new songs and shared out sound between both guitarists suggests that the bands new form may have the legs to go further than ever before. 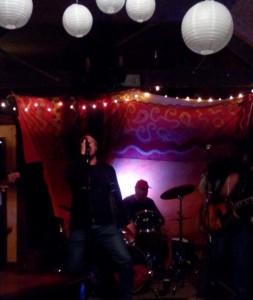 Moon Bullet left the stage after their short performance and the evening ended with a set by local band Gripper and the Gurnards. Headed up by Nick Davies on vocals the band blasted through popular guitar covers from the 70’s and 80’s, including fine versions of The Clash, Martha and the Muffins ‘Echo Beach’ and Dead Kennedy’s ‘Holiday in Cambodia’. It’s crowd a pleasing, varied set that offered something for everyone in the audience.

All in all then, probably the best ‘Nailed Down’ event to date. The look and feel of the venue cannot be understated. It’s a simple, but effective, makeover that cleverly used the upstairs entrance as a chill out area with Nick playing a wide selection of eclectic vinyl from his own collection. It’s been a promising end to the year of live music and I’ll be eager to see what the organisers do next.