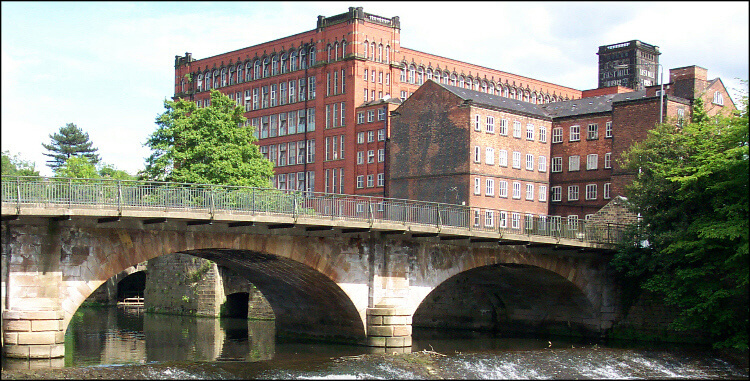 Cotton spinning was carried out on the Belper Mills site for over 200 years, from c1778 when Jedediah Strutt’s first ‘South Mill’ is thought to have come into operation. The era of local cotton spinning lasted until the early 1990s when the English Sewing Cotton Company finally closed down the remaining spinning operations in the East Mill.

The current North Mill, which today houses a tourist information centre and fascinating museum, was designed by Jedediah’s son William following a fire in 1803 which destroyed the original North Mill. It was considered at the time to be the most technically advanced industrial building of its kind and greatly influenced early 20th Century building construction such as skyscrapers!

Belper North Mill is a charitable trust supported by a number of enthusiastic volunteers keen to preserve our history and showcase the uniqueness of our local World Heritage Site treasure. Earlier this year, some of the volunteers formed a Belper North Mill Research Team dedicated to finding out more about the history of the North Mill and its workers.

When Jedediah Strutt established the first Mill on the Belper site he also set about building a community the legacy of which was maintained by generation after generation of the Strutt family and contributing significantly to the town of Belper as it has evolved to-day. The Belper North Mill Research Team are keen to support the community spirit established by the Strutt’s and develop the North Mill into a vibrant historical resource centre for locals and visitors alike.

The Belper North Mill Research Team plan to undertake several ‘projects’ including the creation of exhibitions at least twice a year. Our first exciting exhibition project is themed around the industrial community which Jedediah initially started.

The exhibition which will open on March 25th 2016 (Good Friday) will be exploring,

“The Rows and Clusters of the Strutt’s Community”

We are generally, but not exclusively, researching a period between 1851-1901 and below is an example of one of several photographs we have of Belper Mill Workers from the late 19th Century about whom we have little information other than a name.

We welcome our local community to be involved in our project and if you have any information, however small, about your own experience or that of any ancestors who were associated with the Belper/Strutt’s Mills, do contact us with it. You are also more than welcome to pop in to the Mill to browse at the other photographs of workers we have – you never know who you might meet!

For our exhibition, we are particularly looking for contributions from those who are still living in one of the Strutt built houses and you can help us in the following ways:

If you think you can help in any way, please contact our Research Team by phone (01773 880474), drop in to the Museum at weekends (11 am to 4 pm) or email using the following title/header, North Mill Research Team” (we may not receive it otherwise!), on: