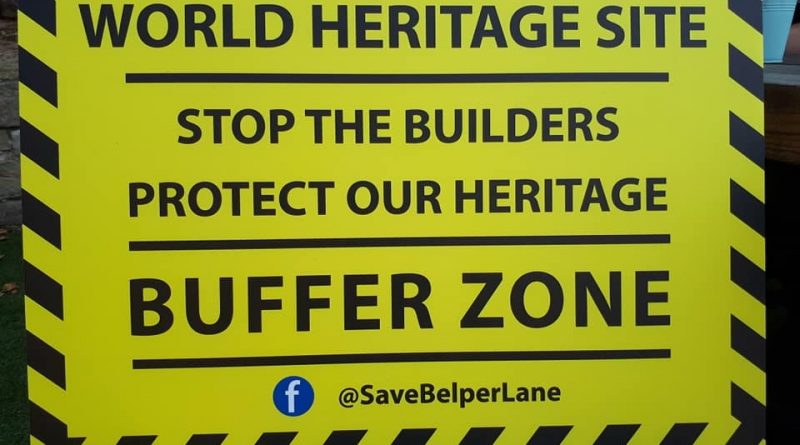 For the past 4 years, Save Belper Lane have been fighting against the proposed development of green fields within Belper’s World Heritage Site Buffer Zone, which would destroy a 200+ year old view which is a significant part of the site.

On 29th July, Robert Jenrick, the Secretary of State for Housing, Communities and Local Government gave approval for Wheeldons to build up to 118 houses on the site. After calling in the appeal and sitting on it for two years, this occurred in the same week that the government’s white paper proposed “automatic approval” of building applications (taking all power away from communities), and the PM’s “Build, Build, Build” slogan came out.

The World Heritage Status of Belper and the connected sites along the Derwent Valley depend on the Buffer Zone around it not changing. This specific view is unique, and it is rare for a view seen by historical people to still exist. It will not exist if the building goes ahead. This puts the World Heritage Site “at risk”, and Belper might lose the status due to significant change to the Buffer Zone. A corrupted historical site is of less importance, and cannot be preserved if it has already been damaged.

The only way to reverse this decision is to appeal on a point of law. Two potential points of law have been identified – one by AVBC council, and one of broader significance by the Save Belper Lane group experts Wendy Mitchell and Ann Smith. These are being assessed by a barrister. The deadline to appeal is 9th September.

This decision sets a precedent for case law going forwards. The precedent puts ALL other World Heritage Sites at risk of development in their Buffer Zones.

This is first time a large development has been allowed to go ahead in the Buffer Zone of this unique WHS, where the industrial revolution began, and the world was changed.

The removal of the green field setting for the site permanently removes a part of the setting, and diminishes the importance of the site. The criteria of what surrounds the mills are included in UNESCO’s decision to award this site World Heritage Status.

Developers will be using this precedent for Belper’s, and other WHS’s across the country, citing this case. This is not just Belper’s fight. This is England’s fight.

The Secretary of State relied entirely on the report of an inspector who used out of date information on housing. No weight was given or input considered from UNESCO, ICOMOS, Derwent Valley Mills World Heritage Site Partnership, other experts, or residents.

The government appears to be focusing entirely on the economic benefit of more housing, regardless of all other factors. That economic impact is isolated to putting money into just 2 pockets – the land owner, and the builders.  Increased economy to the town by greater number of residents is not valid, due to the building being possible in a more appropriate location – it happens anyway regardless of WHERE houses are built.

The impact of the lack of infrastructure for these additional homes, humans, and cars has not been considered. Increased flood risk due to loss of drainage, in a flood risk zone which affects and damages the Mills and associated architecture themselves, has been discounted as irrelevant. The economic impact of the loss of World Heritage Status on the town has not been considered.

As a nation we are breaking a promise and international agreement to UNESCO to protect World Heritage Sites.

For the first time, the World Heritage Site is being nibbled away at the edges. The unique nature of this WHS will be destroyed.

What Can We Do?

We need to make noise.  The more noise we make, the more Belper’s voice is heard.  We need to attract national attention, the attention of influential people, and to push influential bodies like UNESCO, ICOMOS (UNESCO police), and other relevant organisations to speak out and oppose the development.

Belper is great.  We have the Best High Street.  Belper Blooms brighter in awards for our gardens.  We are great at getting flags out to support people, to remember those lost, or just to celebrate being Belper.  We’ve raised armies to help with flooding or feeding people during the pandemic.  But our greatest grandest and most important identity is in our history and the fact that we are recognised as one of the most important places in the world.  Belper is globally significant, not because of shopping or flowers or lots of social events but because we are a World Heritage Site.

The town only exists because of our mills.  Without them we would be a mediocre unimportant smaller former nailing village.  This factor makes us a tourist destination and raises our local economy, as well infusing us with pride.

It’s not just the mills that make up the World Heritage Site, it’s also a mapped, photographed, monitored area around the mills – the Buffer Zone.  This definitively includes the fields.

It can’t change significantly.  But it will unless we stop it, and complacency, fatalism, whataboutism, and contrary support of uncontrolled building are our enemies in the fight to save it.  AVBC has overdelivered on housing, has identified accurate housing needs, has identified appropriate building sites, and isn’t stopping all building.  So wanting houses is not a valid argument to allow this specific site.  There is no either/or situation.  We can have enough houses, without damaging the World Heritage Site and losing our status.

The most important work is going on behind the scenes, with the construction of the legal challenges.  This is based on years of work by the Save Belper Lane community group members. These points of law are our tanks, and are the way to change the decision.

We, the Belper people, can’t do all the legal work, but we can make noise to put focus on reversing the decision.

Save Belper Lane have sent out press releases to ask for coverage and have already been on East Midlands Today and in national BBC News.  Now your voices are needed.

We have 4 weeks to go

Put your placard outside your property in a visible and prominent position, to be seen by passers by.  There are 28 placards left if you want one.  They are £5 to cover costs incurred by the community group. You can email SaveBelperLane@gmail.com to request one.

Post, repost – publicly, on your own accounts, to famous people, to historians.

Using these hashtags creates streams which the media and anyone checking can see, and it helps to spread the message further and get more people supporting us.

These accounts cannot make the noise on their own.  It is up to you to speak out, to post, to use the hashtags.  It is in YOUR hands, all you have to do is shout on social media.  We can do that, can’t we?  Fill the platforms with a Belper Bellow – “Hands Off Our World Heritage Site!”

Click on the photos of Save Belper Lane to enlarge

Note: Editor of Nailed, Clare Washbrook, is also the Press Officer for the Save Belper Lane campaign and designed the placards. Nailed supports the World Heritage Site.