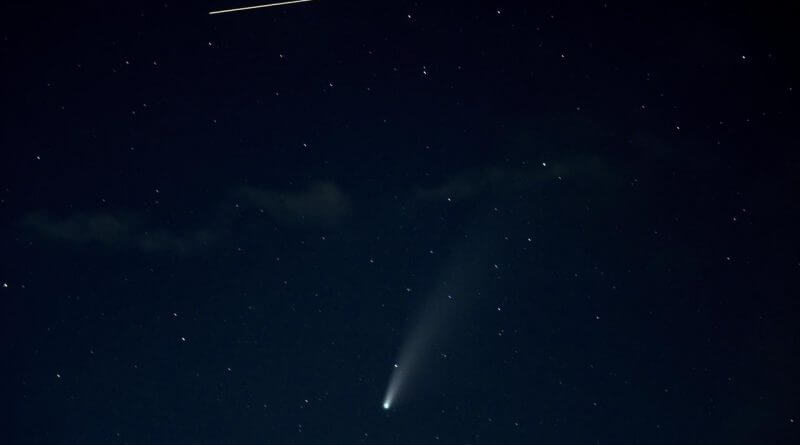 Comet Neowise did not disappoint. My first sighting of the comet was on 11th July around midnight, it was clearly visible, with a strong tail pointing vertically upwards. It looked even better through binoculars.

Like many others, I was looking forward to observing the comet over the following nights. However, clouds rolled in, obscuring the view. My next sighting of the comet was on a clear night, from a relatively dark site on the 22nd July. I needed a star chart and binoculars to locate the comet and its tail, once located it could be perceived with the naked eye.

Comet NEOWISE has now faded and dimmed significantly. My last sighting was on the 27th July, in the light polluted sky around Belper. Using binoculars and a star chart I could identify its centre (a hazy blob) but I could not see the tail.

Comet NEOWISE is now moving away from the Earth and the Sun, and will fade even more during August. Its core can still be seen with binoculars – but a dark site will be needed to have much chance of spotting it. A star chart, from the Comet Watch section of the Society of Popular Astronomy, shows that Comet NEOWISE is moving towards the red star, Arcturus, during August – but it will remain low in the sky.

(Image above, Comet NEOWISE with the track of ISS. Taken at Keys Gap, West Virginia. Image by NASA / Bill Ingalls).

The Comet, Swift-Tuttle is on an orbit that brings it close to Earth every 133 years. It was last seen in 1992. Burned by the Sun, it leaves behind, in its wake, particles and fragments of cosmic dust. Every year the Earth passes through this stream of debris. Fragments hit the Earth’s atmosphere, burning up as meteors. The meteors can be traced back so that they appear to be emanating from one point in the sky; a radiant point, located in the constellation Perseus. This is why the meteors are called the Perseids.

The Perseids produce fast, bright meteors. Some leave glowing trails. Look for them during August as night falls. The best view will be on the peak night of Wednesday 12th August into the early hours of Thursday 13th. However, good views can also be had on the nights of the 11th / 12th and the 13th / 14th. After the peak nights the number of meteors to be seen decreases significantly – although you may see a few up to the 24th of August.

If looking for Perseids it is best to be able to see as much of the sky as possible, away from street lights if you can. Start looking as night falls. Technically you should be able to see more meteors as the night progresses, however, on the peak nights, the Moon starts its rise after midnight – and the resulting light will obscure fainter meteors.

The Perseids are a major meteor shower, on the peak nights expect to see one or two meteors at least every 10 minutes or so – more if you are lucky.

8th of August, the Moon appears to be close to Mars.

15th and 16th of August, in the morning hours a crescent Moon appears to be close to Venus.

28th and 29th of August, the  Moon will appear to be close to Jupiter and Saturn.

Jupiter: This is a good month to see Jupiter. It is visible at nightfall, shining brightly in the south. It is quite low down in the sky – but above rooftop height for most of the evening. Binoculars will show the Galilean moons. A small telescope of good quality will show its equatorial bands. Larger scopes will reveal the Great Red Spot.

Saturn: Jupiter is joined in the sky by Saturn (a nice pairing). Saturn is lower down in the sky – but clearly visible. A small telescope will show Saturn’s rings.

Venus: Shining brightly in the early morning sky, it rises in the northeast, visible before dawn. On the 15th and 16th of August it will appear to be close to the crescent Moon.

Mars: Now visible around midnight, rising in the east. Distinctly red, it will get brighter as the month progresses.

No sightings are being given at the moment. Check after the 19th of August at Spot the Station for any sightings in August. It is also possible to sign up to the NASA Space Station Alerts service for advance notice of when ISS will be visible.