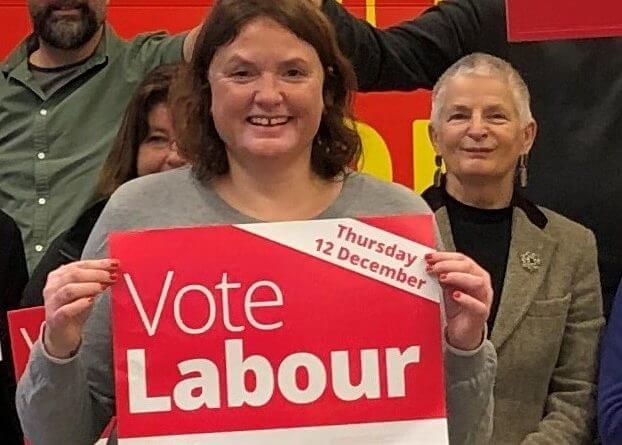 Here we look at the material for the Labour Candidate, Emma Monkman.

The Labour leaflet had format difficulties, so we are publishing it as click to enlarge.

“Mid Derbyshire has been taken for granted for too long.”

There is a focus on representing the voice of the voters.  Voters are unlikely to have a unified voice, but listening to the parts is an important focus.  Emma is currently an Amber Valley Borough Councillor and the promise of listening to what people want is evidenced, as many local desires have been strongly represented in council.

There is no manipulative language, nor are there deceitful statements on this side of the leaflet.  Admittedly there’s not a lot on it, but that’s not unusual.

NHS– it is asserted that the NHS is under attack and that private companies are making profit from running NHS services. It suggests that the NHS may be part of a trade with America under Boris Johnson’s leadership.

This is factual. There are now many hundred private contracts involved in the NHS, publicly recorded on the goernment’s website.  The NHS has suffered crippling defunding under Conservative administration – this is evidenced and reported by the NHS itself.  America, and specifically Donald Trump, have stated that they will only negotiate a trade deal with the UK if the NHS is available for purchase and exploitation within negotiations.  The Conservative Party repeat that it is off the table, but evidence suggests the opposite.  The statement made on the leaflet is not an exaggeration.

Climate Crisis – a promise to focus on the issue.

The statement of time and stakes is accurate.  The choice is misrepresented.  There are 4 choices.  The choice is not only Conservative or Labour.  Labour and the Green Party both have impressive ecological plans. Your vote is for one candidate, not majority governance.

Homelessness – these figures are inaccurate, but underestimated.  Official figures suggest that homelessness has increased 165% since 2010. The figure for children without a home is over 130,000. The situation is worse than stated.

The promise is to ensure homes for all whilst protecting green belt and heritage.

There is evidence that the position Emma already holds on Amber Valley Borough Council is successfully delivering the promise to protect green belt and heritage, on a local level.  Homes for all might be more difficult and has not been addressed at a local level.

Redistribution of wealth is included in the Labour manifesto.  Not by confiscating and giving elsewhere, but by restructuring the way the system works. This is not new or revolutionary, but is divergent from the Conservative capitalist model.

Brexit – it cannot be denied by any faction that Brexit has not succeeded as an aim.  The promise of a second referendum is popular and fair, because the original referendum was voted on with lies, foreign interference, and mass ignorance and misinformation about the EU (all facts with evidence to support them).

Beyond the leaflet, the key offered policies are:

A 4.3% increase in the health budget.

This isn’t as much as has been taken away from the budget.  The reduction in the NHS budget stands at approximately 14.6% (Nailed calculation: reduction of £151b to £129b).  This commitment is at the high end of what any experts have been calling for, as it will take time to restore damage done.  Additional to this funding is the promise to cover prescription charges, basic dentristry, and hospital parking charges.  Labour also promises to cut private provision of NHS services, which accounts for 7% of current NHS funding, which is nearly twice the dedicated increase, leaving 2.7% lower funding than before the election.

Labour promise to negotiate a new Brexit deal, and offer it, along with other options, including Remain, in a new referendum.

This begins on page 89 of the excessively long manifesto.  However, they go into detail on the issue, where other parties do not.

Labour promise to increase the national wage to £10.

This is the lowest promise for a national wage.  But they promise it in 1 year.  The Conservatives promise £10.50 in December 2026, the Greens promise £12, the Lib Dems promise to look at what is reasonable on the same model as the Green Party.

This costs the government nothing.  No taxpayer money is spent on this.  The cost lies with employers, who currently pay people too little to live on reasonably.

The Conservative Party intend to make people work until they are 70 before they can claim a pension.  They have already taken away the pensions of women over 60.  Labour promises to set pension age at 66, with those in arduous jobs being reviewed towards a lower age.

Nobody, except perhaps artists, and editors of newspapers in areas with no other trustworthy news, can envision working until they are 70.  It is a stressful abuse to set retirement at 70.  Most people are dead or incapable of continuing their profession by this age.  The reasoning for this is that the Conservative government used the National Insurance pot, reserved for pensions, welfare, and the NHS on other expenditures (which did not benefit common people).

This is a plan to make Mental Health and Social Care (Elderly Care) equal with physical health.

This system already operates in Scotland and has been previously rejected by New Labour as too expensive.  The success of this will depend upon support from the public.

Labour are aiming for a net-zero target of carbon emissions.   Labour promises to reduce “a substantial majority of emissions” by 2030.

This is a weaker promise than the Green Party.  The Labour commitment is earlier progress than the 2045 target of the Lib Dems but longer than the 2030 target for completion (as opposed to an unspecified majority) of the Greens and the 10 year 2029 target of the Conservatives. 2030 is in line with climate science.

This is the most radical plan for how companies are run, amongst the manifestos.  It would mark the biggest state takeover of utilities and services since World War Two.  This extends beyond nationalisation of fuel and transport and will see non-nationalised companies come under government supervision too.  The differences to private capitalist control of utilities and transport is a lower cost for provision and for the user, and the profit going to government finances instead of private pockets.

Despite saying that the party would scrap the benefit system responsible for mass homelessness and food bank use, the party have failed to offer a replacement.  Critics state that reversal to the previous system (which has not been promised) would be costly.  There is, however, no way to redress the suffering caused, without spending more than the damaging amount currently spent, which sees people with a terminal diagnosis forced to seek work under stringent measures.

Labour’s promise to build 100,000 council homes and 50,000 housing association properties every year until the end of the five-year Parliament is a step back to the original Welfare State model.

Building on this scale has not been seen for over 40 years.  2013 saw a serious shift towards unsustainable private renting, especially for the under-35ss.  This is a key policy, which includes a plan for a new Department for Housing.

The Labour Manifesto is in plain English and does not use manipulative language.

It must be noted that beyond Emma’s official campaign, some Labour members have conducted a Facebook campaign which buried Emma’s voice beneath an undignified, cruel and personal campaign against Pauline Latham.  Nailed has recieved negative reactions to that campaign.  It should be noted that these are the actions of individuals in the party and not of Emma Monkman, who has behaved in an exemplary manner.  There’s not much time left, but Nailed would suggest listening to the actual candidate, as opposed to voices who act without her authorisation.

Disclaimer: Nailed analyses facts.  There are a number of statements in this analysis which could be viewed as partial, but are not. Facts include the impact of policy on people.  Statements of the impact of policy on people, are evidenced to a high degree. These impacts are publicly available in official statistics, and expert impartial assessment.  Nailed chooses not to deny the impact on people in unbiased analysis of party policy.  None of these facts were obtained from any individual party, but underwent a 24 hour research assessment. These facts do not always look good on the current administration, and may undermine opposition policy.  They are, however, facts. Nailed does not support any party or candidate. Nailed does not silence any party or candidate.  Nailed will, however, deal in fact, not ideology.