Here we look at the material for the Green Party candidate, Sue MacFarlane. 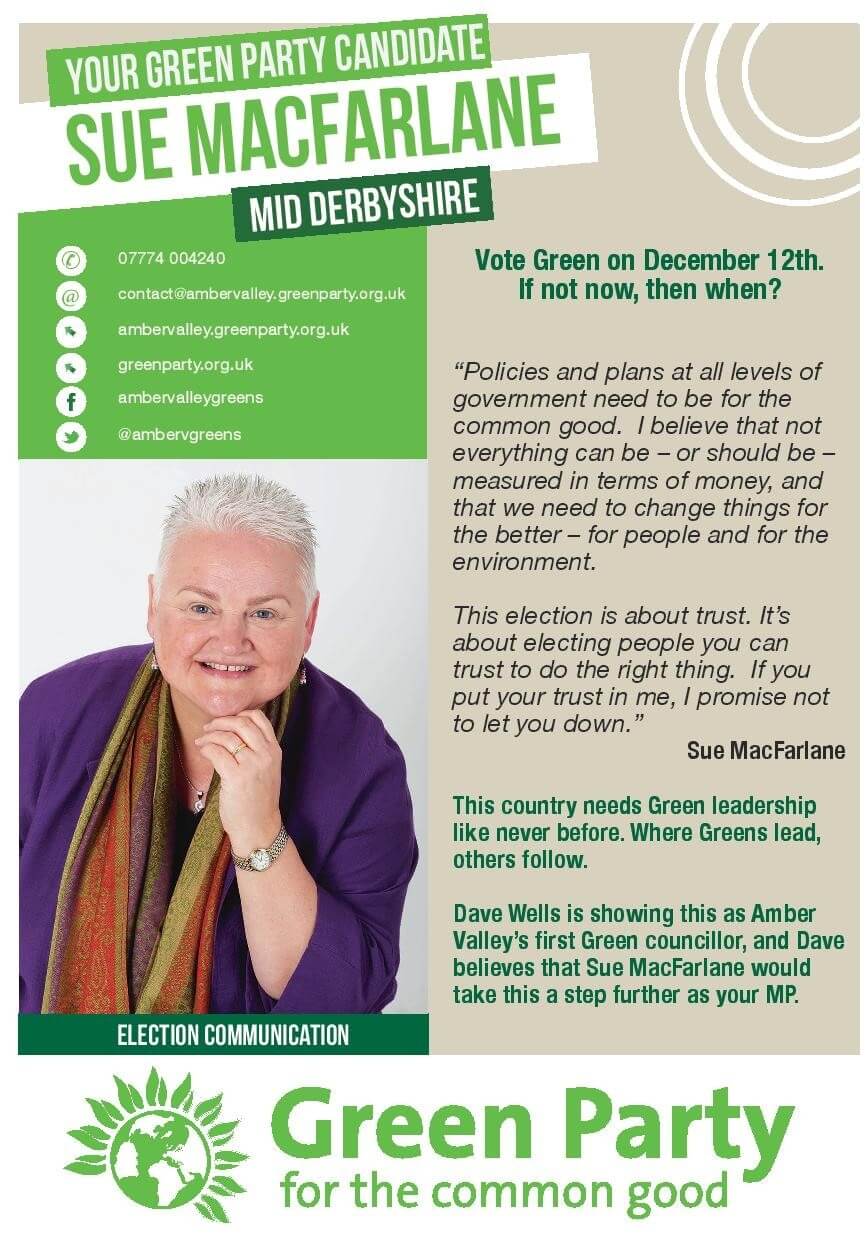 “Where Greens lead others follow.”
This is true socially, in that many of the party’s focuses have become common concerns which are campaigned on and are being addressed, especially in Belper.

It is true that other parties have adopted Green policies, and that the world is focused on climate chaos, although this is because the climate crisis is happening and many other voices now speak the same fight.

It is less true directly politically of the UK Green Party in UK politics, with 1 MP, 2 Lords, and 7 MEPs. Although other parties have adopted long standing Green Party policies as their urgency has been revealed, the Green Party are not leading those fights in  parliament.  Having focused on ecological matters since they formed in 1990, the Green Party has suffered from having their homework stolen, without getting the power and credit for being there first. 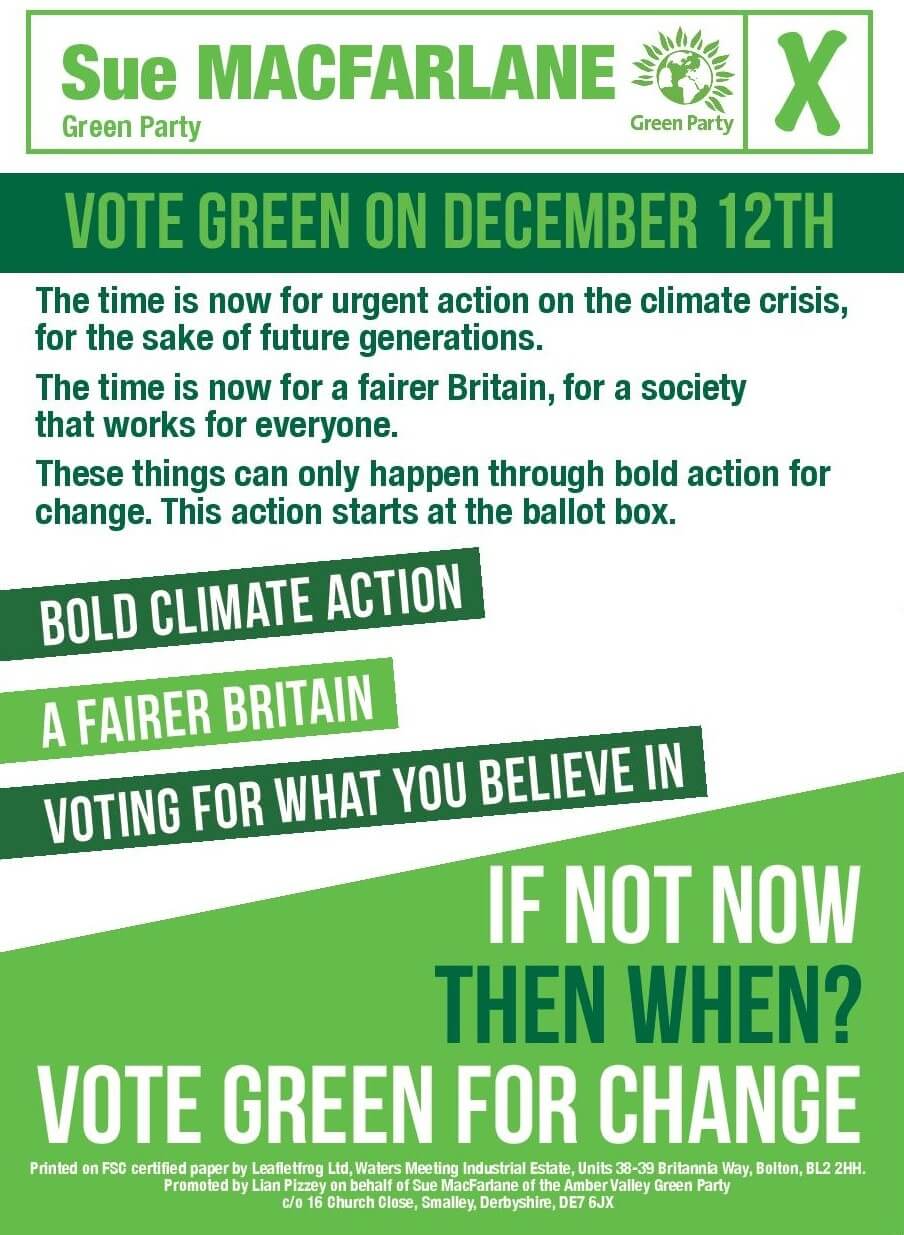 Sue’s leaflet doesn’t contain much information in the way of manifesto promises.  It is, however, not deceitful.  The voter can tell that Sue and the Green Party want to tackle climate change, but can’t tell how.  They can understand that a “fairer Britain” is wanted, but there are no details of what that actually means.

A decision can’t be made on the leaflet alone, so let’s look at the manifesto, which Sue has said she wholly believes in.  What is the Green Party promising?

Their manifesto is revolutionary, costed, and based on science and philosophy.  It values people above profit.  The points below are a selected few, and the manifesto, which is in plain English, needs to be read, to see the full scope of their plan.

The manifesto pledges £100 million a year in investments, to deliver a Green New Deal (with a variety of sub headings) over the next 10 years.

10 years is double the length of the term elected for, and depends upon a majority and being re-elected for a 2nd term.

The New Green Deal would address the use of fossil fuels by switching transport and industry to renewable energy.  It would upgrade household heating systems, and plant 700 million trees within a decade.

These are all planned over 2 terms of office. The pledges are costed and committed on an annual basis, so all of the investment in public transport, renewable energy, carbon reduction in housing and forest planting will be happening during, and for the duration of, the one term.  The plan won’t happen in one term though.

There are no inaccuracies included in these pledges.

The cost appears to be less than the Conservative manifesto, and more than the Labour manifesto.

The Green Party favours remaining in the European Union, but is committed to a second referendum, to give the people a democratic say.

The Green Party believes that international co-operation is necessary to combat climate change.

Leave/Remain as a stance is not a matter of fact to be checked.

They aim to replace short term prison sentences with “restorative justice”, involving offenders meeting their victims, to be affected by the consequences of their actions.  Their focus is on rehabilitation.

This supposes that meetings between victims and criminals will reduce the prison population. There has been a successful trial of this model in the Netherlands, which is cited in the manifesto, halving the prison population.  Britain is a different culture and this would be an experiment to see if British people responded to facing what they had done. This is based on research. This is likely to be a contentious issue because British people are heavily punishment focused.

They intend to make misogyny a hate crime, and decriminalise many drugs.

As misogyny is difficult to define at the moment, that would probably encounter some abuse at point of trying, but hate crimes already have a process attached which is rigorous for proof.

The decriminalisation of drugs has been shown to make recovery more likely, and decrease associated crime.

Heroin would be available on prescription and cannabis clubs would be legal, allowing marijuana to be grown and consumed by adults.

The evidence supporting the reasoning behind both of these plans is strong.

The Greens would introduce a Universal Basic Income, providing every UK citizen with £89 a week.   It is not a replacement for benefits.  It would not be deducted from benefits.

This has been trialed in Finland, where it was shown to reduce stress, reduce health problems, as well as giving participants a higher sense of hope and personal value. Scotland has trialed the idea but the results are not yet available. France intends to experiment with the idea. Other trials have not been the same model.  This is an experiment.  The results are not predictable, with the one example of Finland which saw boosts for wellbeing.

This promise is for 11 years and requires 2 re-elections to be fulfilled.  The funding is promised per year and includes the years of one term.

They plan to create a Ministry of the Interior, dedicated to human rights.

They specifically mention the rights of travellers, which other parties included in their manifestos – Lib Dem and Labour on the same page as the Green Party to protect them, and Conservatives to increase police measures against travellers and confiscate property.

They pledge to increase funding for education by a minimum of £4 billion per year and reduce class sizes to 20 or less over a period of time.

Ofsted would be replaced with a “collaborative system of assessing” schools.

It would be illegal not to teach children about climate change.

Tuition fees for university would be scrapped and debts would be forgiven for those who paid the highest level of fees (£9000).

These changes are in line with advice from educators, who do not usually get to influence policy. There is no manipulative language or inaccuracy in these pledges.

This is an ideological stance against animal abuse, and killing. No emotive language was used in stating it.

The Green Party has struck a deal with other pro-Remain parties – the Liberal Democrats and Plaid Cymru – not to compete against each other in dozens of seats.  This is intended to deliver a higher number of Remain candidates to parliament than if the Remain vote was allowed to be split. We are voting for more than Brexit.

This is unusual in politics but we found no lies, no inaccurate facts and no manipulative or obfuscating language in Green Party material.  Even television appearances, by high ranking Greens, under pressure, where people often forget exact figures, checked out as fact, with accurate figures.  Some parts of the Green Party manifesto are experimental, and the results cannot be assured. These experiments are based on thinking which has been tested in other countries, sometimes with the experiments being ended due to a change of administration.   The Green Party are honest about the background of these ideas.

Sue herself runs a sustainable living shop, has protested extensively on environmental issues, and was one of the founding team of Pride in Belper.  Nailed has photographed these activities. Her life credentials support her commitment to environmental and social justice issues.

All party/candidate leaflets and promises will be fact checked and analysed.  This series will continue tomorrow.