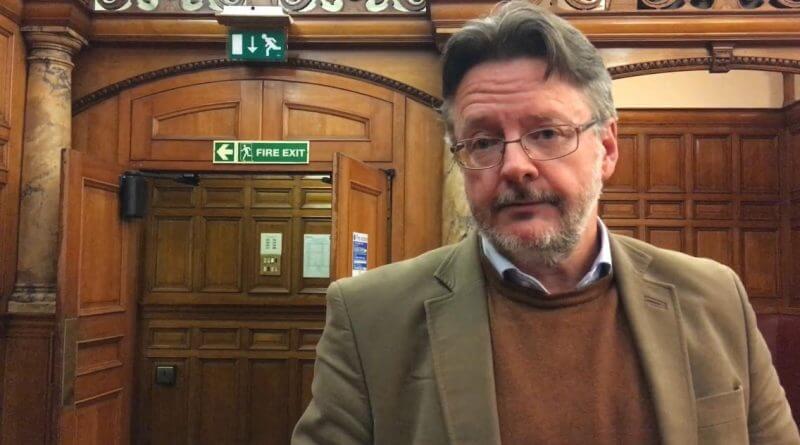 The county council’s leader has said he does not know if the recent mass flooding in Derbyshire is proof of a climate emergency.

However he says it is “unequivocally” linked to climate change.

Cllr Barry Lewis, leader of Derbyshire County Council, made the comments in a brief chat with the Local Democracy Reporting Service.

He said that a series of three one-in-a-hundred years flood events in the last 20 years shows that climate change is having a serious impact on the county.

Cllr Lewis referenced three examples: Flooding in Derbyshire in 2007, and two well-publicised incidents in the past few months – the near disaster at Toddbrook Dam in Whaley Bridge in August and the mass flooding across the county over the past couple of weeks.

However, he stopped short of calling this impact, and increasing frequency of extreme weather events in the county, an emergency.

This came shortly after a meeting in which Derbyshire County Council pledged to become carbon neutral by 2032 and to “decarbonise” the county by 2050 – in line with the legal agreement set by national government.

Cllr Lewis said: “Well, it is certainly extremely serious… we have had three events in the past 20 years, flooding in the year 2007 and two this year.
“That is three one-in-100 year events that we have had here in Derbyshire alone. So if you take that with other parts of the country, it is extremely clear  that climate change is having a very severe impact on lives, on people’s homes, and on our economy, and certainly infrastructure, as we have seen.
“We have got damaged roads everywhere, debris trapped under bridges, we’ve got our teams out at the minute working everywhere trying to get those blockages cleared.
“If we get another event like that, and that is entirely possible, we are not going to get the water through those bridges and indeed we could see further damage as a consequence of not doing that now.
“We know people out there have got issues with potholes in roads and so on, and we are asking people to just bear with us at the minute whilst we get the most urgent things that we need to get sorted out, sorted out.
“As well as that we have got getting on for now, 200 residents that have been affected by flooding, throughout Derbyshire, and 116 businesses directly impacted by flooding.
“We are putting as much as we can, in terms of support, around them at the minute, I’ve lobbied government, I’ve spoken to Robert Jenrick (secretary of state for housing, communities and local government), Nadhim Zawahi (business minister), we’ve even had the prime minister up here.
“We are just tackling some of the big issues around how we can keep support for our residents.
“So we put in £100,000 of our own money, we’ve spoken to the districts and boroughs and they’ve put in money as well.
“The government’s sort of taken our scheme, our framework, and said we’ll use that and have given us more, not just us but other flood-affected areas.
“There’s a lot of work going on on this.
“But there is no doubt about it, I think we can all unequivocally say that this is linked to climate change.
“You want to call that an emergency, perhaps it is, I don’t know, but we just have to take a science-based approach, an evidence-based approach, the evidence that is before us and the damage that has been caused.”

This month’s flooding in Derbyshire left dozens of roads closed off and some villages almost entirely inaccessible with residents unable to get in or out.

Business owners in Matlock, where the county council is based, were particularly badly hit by the rising flood waters.

In the north of the county, Rowsley resident and the county’s former high sheriff, Annie Hall, died after being dragged away by alarmingly-fast flood water.

A coroner’s inquest in Chesterfield heard that she and her husband got out of their car after they drove into flood water and the engine seized.

In the county cabinet meeting on 21st November, the authority approved two “blue ticket items” aimed at curbing the amount of carbon emissions put out by the council and by Derbyshire as a whole.

Denise Ludlam, the council’s lead officer for climate change and sustainability, said: “It is not about the target date of being carbon neutral, it is the speed of decarbonisation that is crucial.
“We can’t do this alone, it is up to every organisation and every person to play their part.
“Everybody needs to be aware of the role they can play and should be playing.”

Cllr Lewis said: “This is about bringing people with us, it is about a measured, achievable target.
“This is going to be a big ask, it is not just us, it is about everybody considering their impact.”

Cllr Simon Spencer, cabinet member for highways, said that flood prevention schemes such as those being carried out on the moorland near New Mills should be replicated across the county. This involves the damming of streams on the moor to slow the impact of water running off the high hills on villages and towns downstream.

Cllr Spencer said the scheme cost £25,000 and was funded by central government .

The council cabinet agreed to seek government money and other support to help the authority meet its carbon reduction aims.

Cllr Tony King, cabinet member for economic development, said: “We are moving and we are moving fast.
“We are going to lobby the government for both funding and policy support.
“What is exciting is to see the speed at which people are being energised to do something.”

Key ways in which the council aims to reduce its own carbon emissions include continuing to change street lights from sodium bulbs to LED and night-time dimming.

It will also ensure that its buildings and vehicles are as energy efficient as possible – which would include off-loading some buildings and installing renewable energy technology on some of its properties.

The council’s own fleet would be “electrified” with electric pool cars for its employees, and its heavy goods vehicles would be “decarbonised”.

Ways to reduce carbon across the county include installing 39 fast and 11 rapid electric vehicle charging points in public areas.

The council will also aim to support low-carbon businesses, “foster green energy entrepreneurs to develop renewable or zero carbon energy production” and to work with the district and borough authorities to urge housing developers to build eco-homes “fit for the future”.