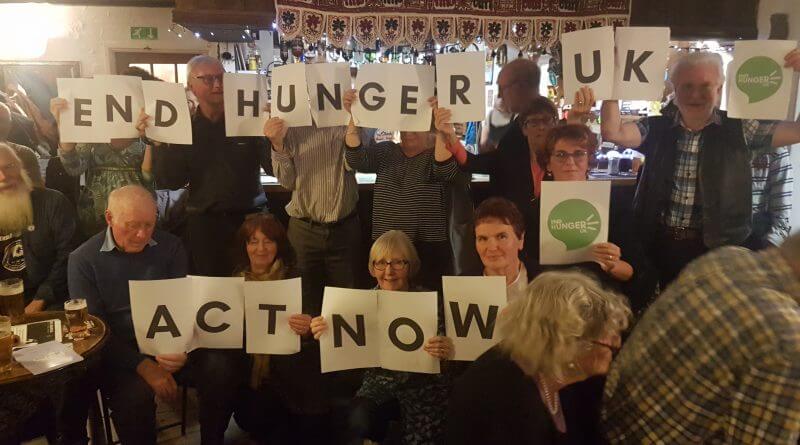 Campaigners from Wirksworth, Belper & surrounding areas in Derbyshire are calling on the Government and all parties to act now to end UK hunger.

Members of the Nelson Folk Jam, who come from several towns but meet in Middleton-by-Wirksworth, gathered to unveil a message calling for immediate steps to be taken to tackle hunger, food poverty and insecurity.

The UK pledged in 2015 to end hunger by 2030, but no plan for how that will happen has been developed. If the target is to be achieved, a Government-led strategy across all departments is essential. The End Hunger UK campaign says politicians must listen to the experiences and insights of people who have been caught in a rising tide of poverty and debt, and says the national target must be to halve household food insecurity by 2025, as a step to ending it by 2030.

Deborah Short said: “It is morally deplorable that so many people in the UK are going hungry, having been swept into poverty by systems beyond their control.
“There are some amazing projects up and down the country helping to meet the need day to day, but we need to move beyond sticking-plaster solutions and really tackle the causes of food poverty.
“We need the Government to lead on this, and really tackle the systems that are pushing people into deeper difficulty, so people can escape the clutches of poverty.
“We also need Government to lead regarding the risk to food security posed by climate breakdown, particularly in the context of Brexit. Climate change and other stressors have led to crop failures around the world.
“These problems are already having a significant and growing impact on human health, with impacts set to become more severe.”

The national End Hunger UK campaign includes around 40 national charities, anti-poverty organisations and faith groups. It has proposed a range of policies that can reduce poverty and contribute to ending hunger in the UK. In the past two years, nearly 20,000 people and 150 organisations have taken part in campaigns around child food insecurity during school holidays, Universal Credit, and discovering the true level of hidden hunger in the UK.

Following these campaigns, the Government provided nearly £9 million this year for school holiday and activity pilot programmes, has introduced annual measurement of household food insecurity, and as part of the 2018 budget agreed to spend an extra £1.7bn to address some of the most glaring problems associated with the roll-out of Universal Credit.

Niall Cooper, Chair of End Hunger UK, said: “We all want to live in a country where everyone has access to good food and no one needs to go to bed hungry, but we need action to make that a reality. All parties need to commit to drawing up a clear roadmap to end food poverty, and the Government must act now to end hunger.

The UK currently has no shortage of food. The problem is one of incomes – too many working and non-working households are being hamstrung by insufficient wages and a benefits system that does not cover people’s essential costs.

Charitable emergency food provision has proliferated in the UK in the past decade and large numbers of people have been forced to turn to food aid providers. In the sixth wealthiest nation on the planet, this is simply not right.”