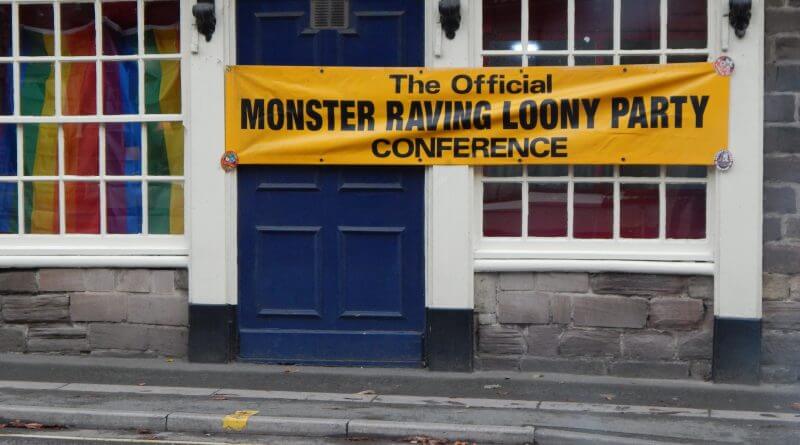 Some Nailed coverage has been delayed due to short staffing and illness.

Top hats and peacock feathers abounded. The assembled members of the MRLP seemed to be a combination of slightly wayward Morris dancers and Sgt. Pepper’s Lonely Hearts Club Band mixed with what someone told me was “steam punk”, which I take to be something pre-digital.

A kazoo rendition of The Cuckoo Song from Laurel & Hardy by well over 100 people beat the previous Guinness Book of Records attempt, according to a person knowledgeable in such matters who happened to be standing next to me.

Mainly I think it was about dressing up and drinking. A sticker featuring a dodo only inclined you to think that they were already history and another slightly sun-faded design proposing tollbooths in the English Channel as a solution to Brexit drew little interest.

The cabinet re-shuffle featured a (probably pine) wooden piece of furniture which seemed to be full of knots (and the combination of ‘would’ and ‘nots’ did rather remind me of Parliamentary debates over this last year). Suffice it to say, people queued up to take a turn in the cabinet, which was placed like a playpen in the George & Dragon car park.

All in all the MRLP Conference (on the Saturday at least) seemed to be a good-hearted and colourful, slightly anarchic and eccentric bit of theatre, a kind of we don’t care that is also up for a stick fight. It’s a subtle satire, entrenched in heritage.

Without them the Returning Officer’s job would be more boring. And for those of us who stay up late to hear election results they offer a frisson of anarchic silliness to the serious business of democracy.

A second perspective can be read here: https://nailed.community/2019/10/17/opinion-when-the-loonies-came-to-town-pt-2/