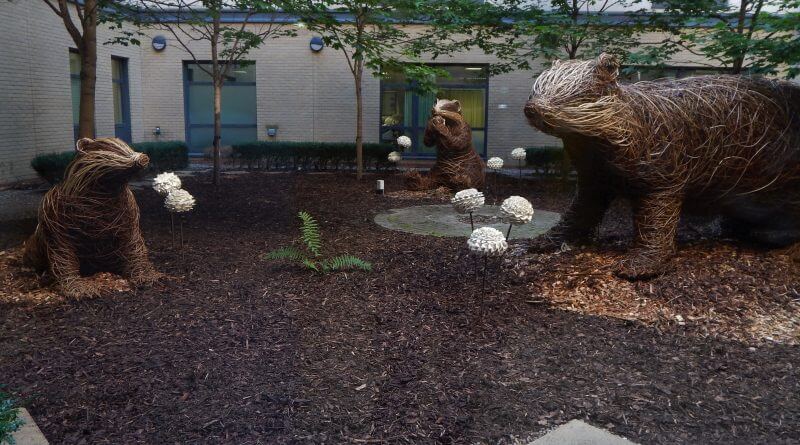 Nailed is behind on delivering some news due to short staffing and illness. We apologise for the delay.

On 17th September, there was an installation launch for local artist Emma Parkins’ The Badgers Sett, which is on long term display on Level 1 of the Royal Derby Hospital.

Emma specialises in willow sculpture and her main subject matter is wildlife and animals. Emma is well known in Belper for her stunning willow sculptures, which include decor seen at Belper Goes Green, and installations for National Trust properties.

The launch was fairly informal, with a gathering in the space beside the courtyard, which was not accessible whilst the blood clinic next door was open.  Wendy Tou played gentle harp music to set a peaceful tone.

Laura Waters, from the Derby Teaching Hospitals’ Air Arts charity, told us that there has been art throughout the hospital right from the beginning of the merger between the Royal Infirmary and Derby Hospital in 2007.  This began with a team to focus on decor and colour schemes for the building, to ease the transition for staff, as a wellbeing tool. There are exhibitions of all five floors of the hospital, including sculptures on the 5th floor.

Laura came across Emma’s work at Kedleston Hall when she saw her gamboling lambs.  She said, “I just thought they were amazing, because of the movement.  I thought – we need to get some of that here!”

It was the first time that Emma had worked on this scale.  A large dog was the biggest figure Emma had made up until this commission.  The space Emma was challenged to design is 4 by 2 metres.  She relished the opportunity to show what she could do on a grander scale.

About the experience, Emma said, “It was really good.  I actually found it really freeing.  I like working bigger better than working smaller. And physically it’s actually better for my back, because you’re not struggling leaning over.  I really enjoyed it.”

Emma spent nearly a year creating the badgers, albeit not constantly.  The willow scupltures are created on steel armitures, which were made in sections by Miles Halpin, and brought in when clinic was shut.   There were some serious logistical problems, including the fact that everything had to come through a small door in a blood clinic which required privacy.  There was also the fact that it took 9 days to soak willow when it ran out, before it could be used.  Miles Halpin, who creates all of the frames for Emma’s work, had to work out how to create the armitures in a way which would fit through that small door.

The sculptures are made from a brown willow and a white willow.  The brown willow, Black Maul, has bark.  The rarer white willow has no bark. The sculptures were preserved with linseed oil after construction. They are constructed in a sheltered location, and are therefore likely to last at least 10 years, before they begin to decay and become a habitat for insects.

Elaine Lim-Newton’s light installation, called Night Bloom, was already in place.  9 years ago her lights were meant to be a temporary display. Elaine renovated the piece and the lights were rewired and repositioned to compliment the badgers.  Emma and Elaine didn’t collaborate on the positioning of the pieces, but did communicate a little by email.  The lights really compliment the badgers. This was the last thing to be completed, with the electrics being completed 2 days before the launch.

Emma chose badgers because they are “enigmatic creatures” which we don’t see very often.  Construction of the badgers started in October 2018 and were complete in August 2019.

Emma would like to do a large indoor piece in the future, giving the piece a greater longevity.   Although she finds beauty in both the intended structures and their eventual decay.  But she would like to see something last longer, whilst not betraying her ecological ethos of zero carbon impact.

Paul Brooks, the Director of Patient Experience, Estates and FM, told Nailed a story about a member of the public phoning in the hospital to warn them that there was a homeless building a tent in the courtyard.   This was Emma working under a tarpaulin during a rainy spell.