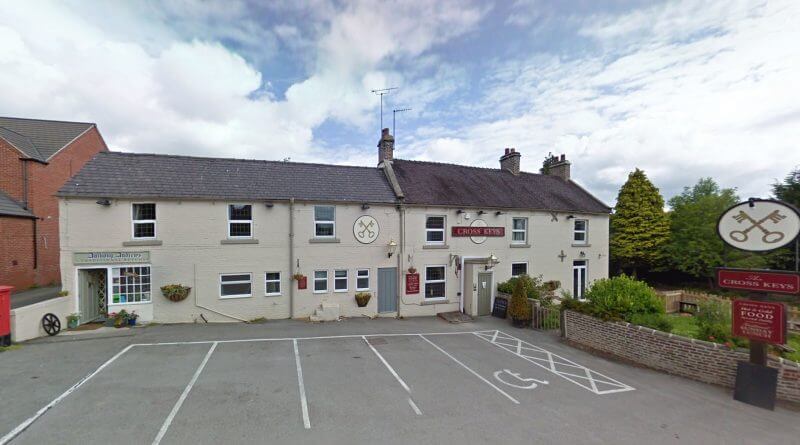 Plans to turn a former Derbyshire village pub into homes have been submitted to Amber Valley Borough Council.

Meanwhile, a further four-bed house and a block of five two-bed flats would also be built in the grounds of the now vacant Cross Keys Inn, a few miles west of Belper.

The borough council will make a decision on the application in the next few months.

The site currently has room for 34 cars, but this would be reduced to 19 through the development.

A previous application from the same Willington-based applicants was submitted for the site in 2018 which included the demolition of the pub and its replacement with four four-bed detached houses.

Now, the applicants propose to retain the pub and its adjoining shop and convert them into homes – but with an extension and further homes in its grounds.

A number of out buildings would be demolished to make way for the extension.

As part of the previous refusal, Derbyshire County Council had raised concerns about the bus stop outside of the pub, with users forced to wait on the grass verge in front of the beer garden or in the car park.

The applicants say they would create a footpath as part of its plans to provide a safer waiting area.

They say that the pub has been closed for more than a year and without any success marketing it to a new tenant.
Two objection letters have already been submitted to the borough council.

One says that they are “amazed” that a new application has been submitted, saying: “I cannot see that the historic value of the property will not be affected by the extension.
“The number of houses on that parcel of land is out of keeping with the village.”

Another objecting resident wrote that the pub is “part of our social community”.

They wrote that the pub was a coaching inn in the 1700s and has “plenty of history” attached to it which should be protected.

A report from JMI Planning, on behalf of the applicants, says: “The previous tenants deciding not to renew their lease due to the rural location of the property, increased competition, lack of local support and the general economic climate.”

The attached shop unit had been rented out to a local butcher, but they moved out in March this year to an alternative location and a replacement tenant has not been found.

JMI Planning’s report says: “The scheme would bring about the social and economic benefits associated with new housing development including contributing towards the supply of new homes that the country needs, boosting the construction industry, supporting local services and broadening the community.
“The scheme would have minimal environmental impact.
“The social impact of the permanent closure of the Cross Keys is restricted by the limited prospect of it reopening, either as a community run facility or as a commercial venture, and mitigated by the two alternative public houses within close proximity of the site.
“The minimal impact of the scheme fails to significantly and demonstrably outweigh the benefits.”
A report filed by Bi Design Architecture Ltd, on behalf of the applicants, said: “Given the need for additional housing within the area, the adoption of this site for housing is an efficient and beneficial use of the land.”