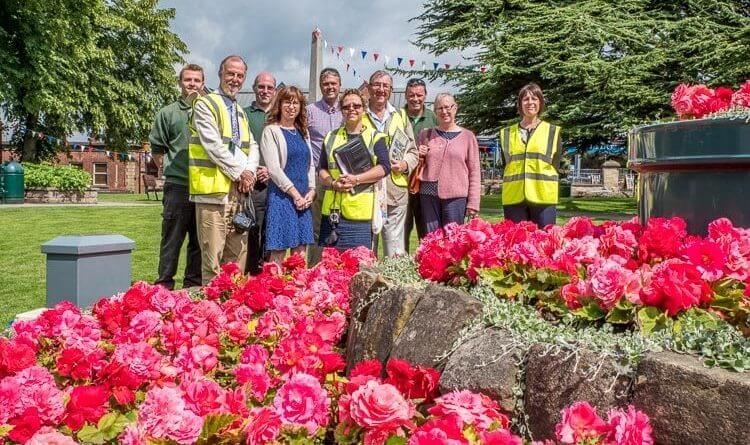 If you take a look at the 57 photos of the In Bloom judges tour taken and posted on the Belper Facebook page by photographer, Jim Bell, one glaring omission stands out.

The missing person is John Nelson, the driving force behind Belper in Bloom for the last 30 years. When asked, Mr Nelson explained that following the Town Council elections in May the new council initially asked him to continue his work with the non-political In Bloom Group. Then following the initial meeting of the Town Council Mr Nelson received a letter from the Town Clerk notifying him that only Councillor Mary Dwyer*, In Bloom Group member Adrian Farmer, and the Outdoor Supervisor of the Town Council Gardening Team would be needed to tour the town with the East Midlands In Bloom judges.

Mr Nelson went on to express his “great disappointment, to be now excluded at one of the most significant moments of the In Bloom calendar, coming after many years of involvement in the organisation, planning and coordinating of Belper’s entry into the East Midlands and Britain in Bloom competitions. It is and always has been a passion and honour of mine and my fellow volunteers to make sure that Belper is at its best on the day of judging.

“The In Bloom Group are likeminded people of all political persuasions whose interest has always been about making Belper look its best, not only for the In Bloom competitions, but as a town that we all can and do feel proud of. It has never been a politically motivated organisation, any I can only hope that this was not the motivation for removing the elected representative of the In Bloom Group from the presentation to the judges on the day.

“I felt I had little option but to resign as Chairman of the Group as I felt my presence would have a detrimental effect on the future relationship with the Town Council and above all else I want the committee and volunteers to continue to represent the town and its residents in making it the kind of town we are all proud to belong to.”

Belper’s record is impressive to say the least. Since 2006 there have been many awards:

(Britain in Bloom awards in bold)

Ann Pocklington joined the Britain in Bloom group originally as a representative of the Belper Well Dressing Group. In 2012 she took over the production of the Judges’ Portfolio – a document recording the nature of the town, the work of the Belper in Bloom group and the activities that contribute to the community here. The judging covers three important areas: Horticultural Achievement; Environmental Responsibility; Community Participation. The portfolio shows the progress made in the current year for all these, and a plan for how we see future developments, as well as the sponsors.

The presentation gives the judges a taste of the parts of the town that they just don’t have time to visit on judging day, and also the seasonal activities that they have missed at other times of the year. Again, there is so much going on that the fifteen minutes is barely long enough.

In an angry letter to Belper Town Council on 15th June Vice-chair, Ann Pocklington also resigned but has yet to receive a reply or acknowledgment. Setting the tone of her letter Ms Pocklington began,

“I am lead to believe that the majority of you, our new Labour councillors, felt that they needed to establish a perception among the townsfolk of Belper that they are  leading all the town’s projects and activities and as part of that plan have decided to alter arrangements made by the In Bloom Group for the  East  Midlands in Bloom judging day. Not, of course, that you have bothered to apprise the group as a whole in a formal way about this intervention. Apparently this majority felt it would be ‘confusing’ for the current Chair  of the In Bloom Group to escort the judges round the town on Judging Day.

“I have never seen the In Bloom activities as being political, although I would have liked to have seen more councillors joining the group and contributing to its work over the years, and not just turning up when it’s time to collect awards or get a free lunch on judging day. It is not  political persuasion that leads me to despise the way in which this  majority on the council have acted – as a Liberal Democrat I can say ‘a plague on both their houses’ with respect to the past and present administration. However, as an individual it is with regret that I feel I can no longer be part of this scheme. I do not wish to be associated with this  majority who want to make hasty decisions to lead from the front when the foot soldiers have already done the work, and indeed are prepared to confine one of them to barracks in case they detract from the new leaders, even if it means diminishing our ability to win the cause – getting another Gold.

I have enjoyed working with this group for many years and compiling the judges’ portfolio and giving the presentation to them has been a particular pleasure. Collecting the award in  Llandudno two years ago was a very, very proud moment indeed. This is not the atmosphere in which I would have wanted to sever connections with the group representing the wonderful community which is my adopted town, but I am resigning as vice-chair of the In Bloom group  in protest at the council’s assumption that their image as leaders is more important than the success of the In Bloom campaign. There is absolutely no way I could now write a portfolio or compile a presentation extolling the wonderful community spirit that has now taken such a blow from the actions of its elected representatives, who should be individually and collectively ashamed of their crass behaviour.

Can I finally remind you of the words spoken by a Mayor of Belper at a Civic Service a few years ago: ‘We do not pay our volunteers. Not because they are worthless, but because they are priceless.’ Your decision to change our plans without considering our views has reduced us to ‘worthless’.”

Following a request by Nailed the Town Council defended their decision:

“The Town Council thanked Mr Nelson for his long association with the Bloom competition, but wanted a change in direction,  putting the workers and volunteers at the front of the judging process rather than just the politicians. We were disappointed that Mr Nelson and Ms Pocklington decided to resign from the Committee shortly before judging. However,  we are delighted to say that our wonderful staff and Councillor Rosie Hale stepped up and delivered an excellent presentation and tour of the town.”

Whatever your opinion of John Nelson and whatever your political views it is difficult to escape the conclusion that, in his dictatorial dismissal, he has been treated shabbily and with a lack of respect contingent with 30 years of dedicated service. It should also be noted that the In Bloom group is mostly comprised of volunteers, some of whom declined to be involved in the judging day following Mr Nelson’s dismissal.

Is this really the open, honest, inclusive, consultative Town Council we were promised?

Photo: John Nelson (4th from R) with Judges and In Bloom Volunteers, East Midlands in Bloom Judging 2016, by Jim Bell

* This article originally quoted the letter to John Nelson as mentioning a D Stewart, who does not exist.  The original was the letter as reported to Nailed.  Upon checking, the named representative is Deputy Mayor Mary Dwyer.