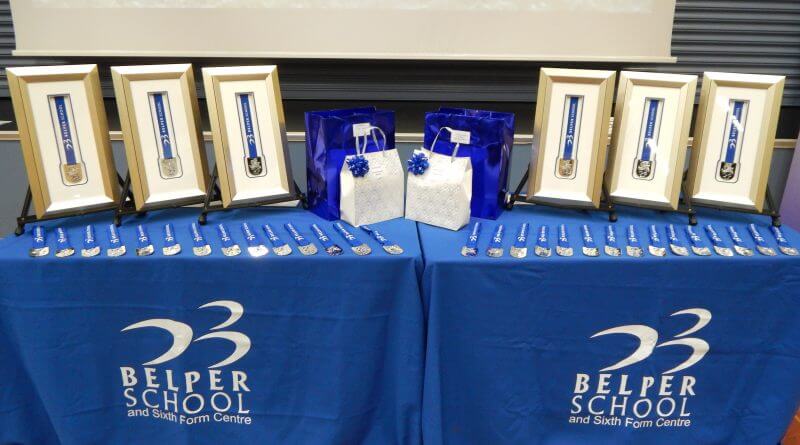 On Wednesday 12th June 2019, Belper School held an awards ceremony to celebrate a fundraising project which turned into so much more.

The hall was set out with round dressed tables, like high profile awards shows, and there was wine, homemade soft drinks, and an entirely vegetarian buffet of food prepared by the school kitchen staff.

The project they were celebrating was the Virtual Run.  The Virtual Run started as a fundraising idea proposed by drama teacher, Sarah Holme, and Assistant Director of Sixth Form, Fran Lloyd.

That proposal was to raise funds to replace obsolete computer equipment by using technology for a sponsored event.
Martyn Cooper said, “two fabulous ladies” came rushing in to his office and said, “We’ve got an idea!”

The event launched, as the concept that students could sign up to participate, and record their walking and running over a month, and collect money for doing so.  Mr. Cooper related the relief at the point they broke even and had £10 towards new a new wifi system for the school.  But then he said, “it became quite inspiring” as more and more stories came in of how people were doing.

“The idea of the Virtual Run came from myself and my colleague, Fran Lloyd. We had done some online virtual runs and thought it would work well as a school fundraiser. With support from the school we made a silly video that got a lot of online attention. As this has been the first event, of this kind, it has been a steep learning curve. The idea was always that this would be an inclusive event encouraging walking, running, or just moving a little more. We invited students throughout school, parents, families and community members to get involved. Once students had signed up we helped them put their mobile phones to a healthy use by showing them how to download and use free health apps.”

This is the video:

At the launch of the event, Jog Derbyshire (which has a Jog Belper branch) came in to launch the event on 1st April. Sarah said, “Jog leaders came in and created a series of exercises and jogs around the school field. Staff and students went running together at lunchtimes!”  Lucy, from Jog Derbyshire told us about how they got students “circuit training” around the school field on that first day.

It wasn’t all athletes.  It wasn’t mainly athletes.  Sarah and Fran set up a stall in the dinner hall area of the school, explaining to students that they could log their dog walking hours, and their paper round, that they could walk, and suddenly it didn’t seem so daunting.

In total 300 people have participated, including students, their family members, school staff and members of the community. Whole families have been out walking together, competing to outdo each other, and to get the highest mileage in the event.

Sarah told us, “Whilst our initial aim was to raise money for school funds, specifically to update IT equipment,  it quickly became clear that the event was about more then that. Establishing healthy habits, a new love of running and walking, all have been reported to us.”  Mr. Cooper also noted that the event had been very beneficial beyond its aims, and saw reserved students be socially braver, new friendship groups form, and to have a positive impact on mental health.

The awards were handed out by Martyn Cooper, Sarah Holme and Fran Lloyd, with framed awards going to those who had done the best in certain categories, including best photo, and longest distance, where Mr. Cooper was just pipped to the award by 0.02 miles by student James Evennet-Bowker, who achieved 275 miles, including his 5 mile paper round every morning.  Sarah and Fran were then presented with flowers for their hard work in creating and running the event.

In just under an hour the awards had all been handed out, the food eaten and the winners departed.

The award winners were:

All participants got medals.

One thought on “Belper School’s “Virtual Run” a Success”