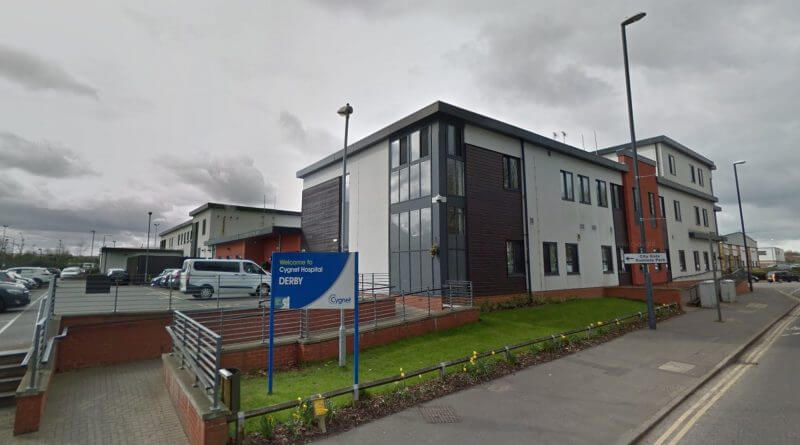 The firm behind Panorama’s hospital abuse investigation has sought to reassure patients and their relatives at its Derby site.

Cygnet Health Care, which operates 140 hospitals and residential institutions across the UK, came under fire in an undercover investigation last month.

Like many of Cygnet’s sites, it is also a specialist hospital which caters for people with complex mental health issues.
Many of its patients have a range of learning difficulties such as autism.

Some patients are housed there by law in what is often referred to as being “sectioned” under the Mental Health Act.
Undercover filming at Whorlton Hall showed staff apparently intimidating, mocking and restraining patients with learning disabilities and autism.

Cygnet said it was “shocked and deeply saddened”.

The CQC apologised for missing the abuse scandal in its inspections and said that the documentary’s footage showed “sickening abuse of vulnerable people”.

A police investigation has been launched into the scandal and 16 Whorlton Hall staff have been suspended and 10 have been arrested.

Now, in a bid to reassure its Derby patients and their relatives, a spokesperson from Cygnet Health Care said: “We have a range of policies and protocols in place that help ensure our patients and residents receive the highest quality of care.
“CCTV is in operation throughout Cygnet Derby, which is regularly monitored and audit checks are conducted monthly to ensure observation compliance and staff presence in communal areas.
“We have a clear whistle-blowing policy made known to all staff, which encourages all employees to easily and confidentially report any areas of concern about the treatment and care provided at our facilities.
“Also, our staff receive comprehensive training with our in-house Prevention Management of Violence team, which exceeds current requirements.
“The safety and care of our patients and residents is of paramount importance, we have zero tolerance of unprofessional conduct towards them and we provide the highest standards of care to aid their recovery.”

Cygnet Hospital Derby has a 16-bed low-secure ward (Alvaston) for women with a primary diagnosis of emotionally unstable personality disorder. The ward can support women with highly complex needs and those who have experienced previously unsuccessful placements.

The hospital also has a 15-bed low secure ward (Litchurch) for men who have mental health or dual/multiple diagnosis needs.

This ward also caters for people who are moving on from medium security placements and who have engaged in dangerous and/or chronic challenging behaviour and who may pose a continuing and ongoing risk to others or themselves. Cygnet says it can also support people who represent a persistent risk of absconding to avoid treatment.

Meanwhile, its third ward (Wyvern) can house 16 men who have severe and enduring mental illness and who may have been detained under the Mental Health Act.

This ward also caters for those with a history of absconding. This, Cygnet says, “is due to the enhanced levels of security we can put in place, both physically and relational”.

Cygnet Hospital Derby was rated good (the second highest rating) by the CQC in its most recent inspection in April 2018.

It was rated good in all five of the assessed categories, which analysed whether the hospital was safe, effective, caring, responsible, and well-led.