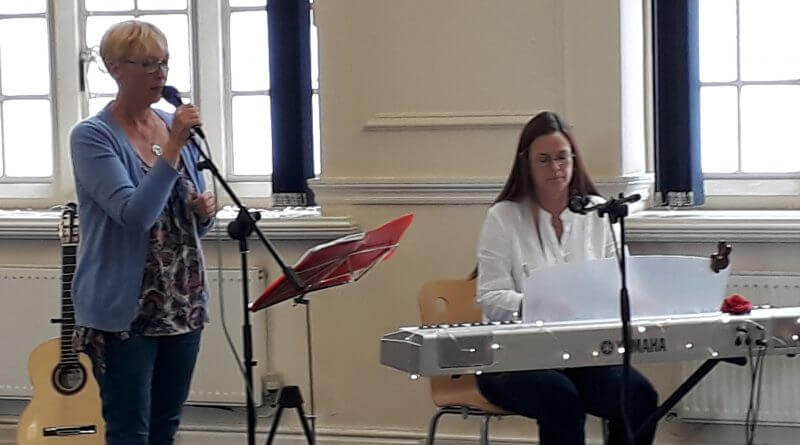 On Sunday (19th May) Strutt’s North Mill Museum held a delightfully relaxed afternoon of free art and music inspired by the Derwent Valley Mills World Heritage Site as part of the Belper Arts Festival. This was held in a seldom seen function room in the Grade II* listed Strutt House thus giving attendees a rare chance to see inside this impressive building.

Compered by Fliss Goldsmith the event kicked off with GRAWL!X (Michael Machin) and Umbilica (Josephine Lewis); a song writing collaboration in response to the Derwent Valley’s industrial heritage. They performed several songs taking a critical look at the North Mill and its impact on both global and local society. Questions were asked about the legacy of industrialisation and the human cost of obtaining the raw materials from the slavers of America. Their vocalisations and harmonies were beautiful and soaring but I was thankful for the spoken word explanations as I could not discern a single sung word.

Storytelling and dance followed with Debjani Chatterjee narrating a moral tale of two sisters chasing wind-borne cotton around the sights of Belper. Actions were danced by Charu Asthana in what was a Belper inspired adaptation of a classic Bengali spinning tale. The kind sister was rewarded with gifts whilst the uncaring sister was rewarded with the realisation that kindness has its rewards.

Sarah Hinds was next up with three folk songs based on stories of ordinary Belper people found at the North Mill museum making observations about the impact of change on their lives. Sarah’s likeable songs are a treat and I’m looking forward to listening to her contribution to the Bullsmoor Song Project.

‘Our Mill’ was the focus of some excellent songwriting and heartfelt performance from Spindrift with Annette Oakes at her Joni-like best on vocals whilst Sarah Newby excelled as usual on cello and keyboards. A lively, up-tempo set – you don’t expect to tap your feet to a cello!

Telling stories of Belper through the ages and our industrial heritage were She Speaks – a collective space for female, trans and non-binary artists to perform. We were treated to the poetry of Pippa Nayer, Emericiana Desouza and Aoife O’Connor.

And lastly, but not least, was Dave Sudbury who treated us to some unaccompanied songs of hilarious events in Belper’s past plus a rendition of ‘The King of Rome’ about the trials and tribulations of a Derby pigeon fancier. Raw and clear vocals brought a smile to the close of proceedings after which we decanted to Arkwrights for their Sunday afternoon open mic session.

The Strutts House performances got underway at 1.00pm and were completed by 2.35pm – when they went through the whole programme again. I would love to be able to see the whole show repeated but with longer sets and perhaps a stage, lights and even a bar. Perhaps the contributors can be persuaded to do it all again and combine it with the Bullsmoor Song Project songs at a more entertainment orientated venue. I’d pay for a ticket.