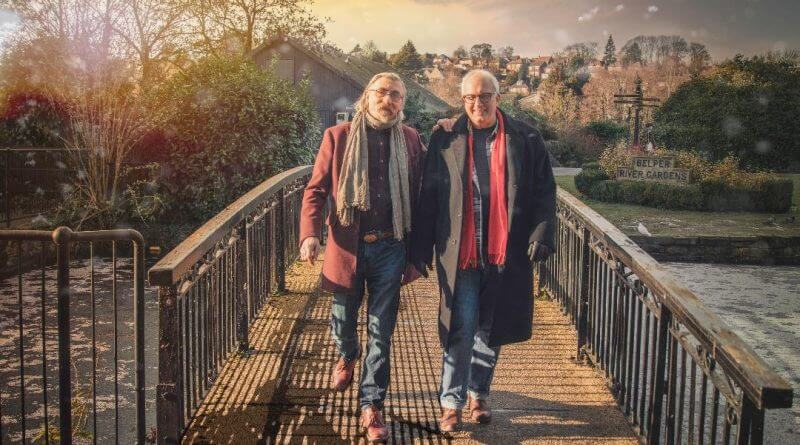 The Belper In Wartime group was selling t-shirts to raise funds towards the installation of the ‘Sacrifice’ sculpture / memorial. Just before Christmas an order came in online that caught my attention. The name on the order was Sally Tams. As each order came in I contacted the person concerned to reassure them that the delivery would be before Christmas. In the case of the order from Sally Tams I added an extra sentence. Would John consider playing a concert to raise funds for the statue / memorial?”

An email from John Tams.
‘Barry Coope and I would welcome a conversation to further your enquiry.’

The Lion Hotel. Within ten minutes of meeting the deal was done, the date confirmed, the venue agreed. Then John said that the fee that he and Barry would normally take would be waived. With that one extremely generous gesture Tams and Coope had pushed the fundraising target for ‘Sacrifice’ within touching distance. At that first meeting John told me that it was fifty years since he had performed in Belper. That was as a member of Muckram Wakes and the group was paid ten shillings (50p). The venue, the Old King’s Head, is still the home of Belper Folk Club. In the half century that has passed since that appearance John Tams has become known, worldwide, as a singer, songwriter, musician, actor and director. From 1976 to 1985 John was musical director at the National Theatre, working on such shows Lark Rise to Candleford, Glengarry Glenross, The Crucible and Golden Boy.

John is also fondly remembered for his role in the TV series ‘Sharpe’ with Sean Bean.

And then there was, and still is, War Horse.  The National Theatre production made its debut in October 2007and since then over 7 million people have seen the show and heard the music. John says, “I’m very proud of War Horse. I have been a musician for 50 years, have worked in the theatre for more than 40 years, and it stands out as one of the most important things I have done.’

John Tams and Barry Coope are long time collaborators but Barry is probably best known as one third of the vocal folk trio, Coope, Boyes and Simpson. Formed ‘around 1990’, the trio released eighteen albums between 1993 and 2016. Barry was also a member of Muckram Wakes (although not at the same time as John Tams), Narthen (say it in a Barnsley accent) and an outfit regularly described as a ‘folk supergroup’, Blue Murder.

One thought on “Folk Legends to Close Belper Arts Festival”