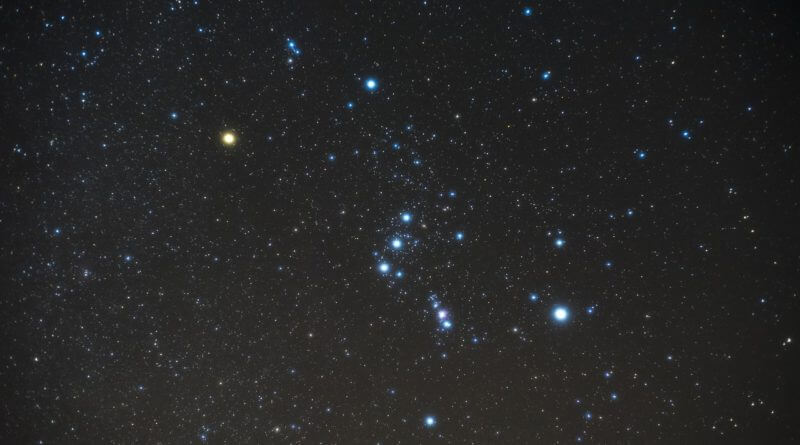 February brings: a line-up of planets, Comet Iwamoto (binoculars needed), Mars is still visible in the evening; use it to guide you to the planet Uranus.

The Campaign to Protect Rural England are asking people to take part in a star count between the 2nd of February and the 23rd. The CPRE hopes to understand the current extent of light pollution in England by asking people to count how many stars they can see in the constellation of Orion (currently the most prominent constellation when looking south after darkness falls).

The best time to do the count will be on the nights between the 5th of February and the 9th of February, when moonlight is low.

To take part, try to pick a clear night without any haze or clouds and then wait until after 7pm – to make sure the night is dark. Full details of what to do and how to submit your results are available here: CPRE – Star Count

Comet Iwamoto was discovered last year by the amateur astronomer Masayuki Iwamoto. The  Comet is predicted to reach a level of brightness that could mean it is visible in binoculars, it will not be visible to the naked eye. It is well placed for observation on the nights of the 11th – 13th of February when it passes through the constellation of Leo. There is a handy guide on how to spot it here: Iwamoto is Coming. The guide includes a useful star chart representing the view, through 10 x 50 binoculars, when the comet passes by the deep sky objects, M95 and M96, in the early hours of the 11th of February.

You will be looking for a small fuzzy blob as Comet Iwamoto is not predicted to develop a tail.

The Total Eclipse of The Moon: 21st Jan

These are my notes for last month’s total lunar eclipse:

3.50am – total cloud cover. No visible stars, no gaps, nothing to be seen except cloud.

The next Total Lunar Eclipse, visible from the UK, will on the 16th of May 2022.

Uranus is a faint planet and is normally difficult to locate, however on the nights of the 11th – 13th of February it will be in close proximity to Mars. As such, you should be able be to locate it through a pair of binoculars or a small telescope. Look for a small, bluish-green, dot.

Mars is prominent in the southwest, shining red. Look for it from around 6pm.

On the night of the 10th, Mars will be just above a waxing, crescent Moon.

On the night of the 12th of February, Mars will appear to be close to the planet Uranus. This means that we can use Mars as a guide to finding the planet. You will need binoculars or a small telescope to spot the much fainter Uranus. There is a useful guide here: Close approach of Mars and Uranus.

Jupiter starts its rise at around 3.30am. To find it  look towards the south-southeast, just before dawn.

Venus continues to be impressive in the early morning sky. Look for it in the southeast where it is joined by the planet Saturn. It will sink lower in the sky as the month progresses.

Saturn is visible in the southeast in the early morning sky. It is low down, but rises higher as the month commences. It is too low for telescope viewing but on the 17th, 18th and 19th of February is notable for its proximity to Venus.

All three planets are visible in the morning sky. You need to get up early at around 6.00am to see all three and you will need a low horizon to see Saturn. This “line-up” of planets makes for impressive viewing, particularly on the mornings of 17th, 18th, 19th of February when Venus appears to be close to Saturn and February the 28th, when the planets are joined by a waning, crescent Moon.

The Spot the Station website is currently showing information up to the 20th of February. ISS will move across the evening sky, in a time slot ranging from 5.30pm to 8.20pm, up to the 10th of February. ISS fly pasts are easily visible but are relatively short (a matter of minutes). To be sure of seeing the station it is best to check the Spot the Station site for the exact times, direction and duration of flypasts. You can also sign up for text and email alerts using the link here: Space Station Alerts. The service only alerts you to good sighting opportunities (sightings that are high in the sky and of long duration).

The astronomical society’s next “Introduction To Astronomy” evening will be held on Friday 15th of February, from 7:30 pm onwards at The Friends Meeting House, St. Helens Street, Derby, DE1 3GY.  There will be a presentation on Pluto and the New Horizons mission (non members welcome).