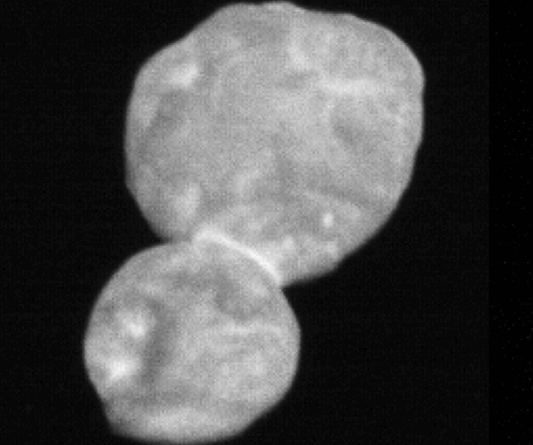 On New Year’s day the space probe New Horizons flew past the Kuiper Belt Object named Ultima Thule (see image above, courtesy of NASA). 4 billion miles away, this is the most distant object to be explored by a spacecraft from Earth. More images have been released on the NASA website here.

Ultima Thule is revealed to be two objects joined together (known as a contact binary). The objects are held in place by mutual gravitational pull. The larger lobe has been named Ultima and is around 12 miles in diameter. The smaller lobe, named Thule, is around 8.5 miles across.

NASA promises higher resolution images and expects to learn a lot more about Ultima Thule over the next couple of months.

Leading up to Christmas the constant cloud cover disrupted all attempts to view the Comet. On one of the nights when the the clouds broke I detected, through 10×50 binoculars, a distinct “smudge” in the location where the Comet was meant to be. I may have detected the Comet’s nucleus in my telescope (a fiery, reddish, point of light) but clouds rolled in before I could make a conclusive observation. Reports are that the Comet is now fading in visibility so I suspect this will be my best (and possibly only) sighting of Comet 46P Wirtanen.

The University of Maryland’s website appears to be the definitive guide to the current status and location of the fading Comet. If there is a clear night it may be worth trying to spot it in binoculars. It won’t be spectacular, expect to see a hazy smudge of light at best.

The Quadrantids meteor shower peaked on the night of the 3rd of January into the early hours of the 4th and (surprise, surprise) was clouded out. The Quadrantids have a narrowly defined peak, however some meteors may be still be observed up to the 10th of January. Grab any clear night, look upwards and be prepared for a long wait.

A Total Eclipse of The Moon: 21st Jan

There will be a total eclipse of the Moon on Monday the 21st of January but to see it you will have to get up early. On Monday morning the eclipse will start at 2.34am. The Moon starts to be obscured by the darker parts of Earth’s shadow at around 3.30am. Totality (the Moon fully eclipsed) will start at 4.40am. The Moon will be fully eclipsed until 5.43am. During totality expect the Moon to darken to a reddish / copper hue.

By 6.50am the Moon will be out of the darkest part of Earth’s shadow. The eclipse will be over just before sunrise (7.49am).

Mars is still prominent in the south, shining red. Look for it from around 6pm. On the night of the 12th of January it will appear to be close to a waxing Moon.

If your interest in Mars has been piqued by the recent landing of the Insight Mars Lander you may be interested in a von Karman Lecture being presented by NASA on the 10th of January: Red Planet Rover and Insights. The lecture should be available from the von Karman Lecture Series archive, shortly after broadcast.

Jupiter starts its rise at 5am. Look out for it on the 22nd of January when it will be joined in the sky by Venus. Look towards the southeast, just before dawn. On the mornings of the 30th of Jan to the 1st of February it will appear to be close to Venus and the crescent Moon (around 7.00am).

Venus is now very bright. Look for it in the southeast in the early morning sky. On the 22nd of January it will appear to be close to Jupiter. On the mornings of the 30th, 31st of January and the 1st of February it forms part of a pleasing trio with the crescent Moon and Jupiter. Look for this around 7.00am in the morning.

The Spot the Station website is currently showing information up to the 19th of January. ISS will move across the early morning sky, in a time slot ranging from 5.00am to 7.30am, up to the 10th of January. ISS fly pasts are relatively short; a matter of minutes. To be sure of seeing it, check the Spot the Station site for the exact times, direction and duration of flypasts. You can also sign up for text and email alerts using the link here: Space Station Alerts. The service only alerts you to good sighting opportunities (sightings that are high in the sky and of long duration).

The astronomical society’s next “Introduction To Astronomy” evening will be held on Friday 18th of January. There is a 7:30pm start. The evenings take place at The Friends Meeting House, St. Helens Street, Derby, DE1 3GY. This month the society will be discussing “What can be seen in 2019” (Non members welcome).

2 thoughts on “Space Is The Place: The Night Sky Over Belper, January 2019”